Last week was National Science Week, which had my family and I heading up to Hawker Area School and Leigh Creek Area School and Marree Aboriginal School for sessions with students, before heading up to Arkaroola to attempt to install a wireless link between the village and homestead, with the goal of later extending it to the research facility in the old shearing shed.

The school visits were designed to give students from areas that are fairly disadvantaged some taste of science week. It was great to see a number of the students engage well, including one budding inventor from Leigh Creek.

I have some pictures from the schools, which I need to clear with the schools before posting them. But here is the rest of the week in pictures.

To depart Tuesday morning, I needed to bring some of the equipment home from work on Monday ready to pack.  My trusty cargo bike came in handy again: 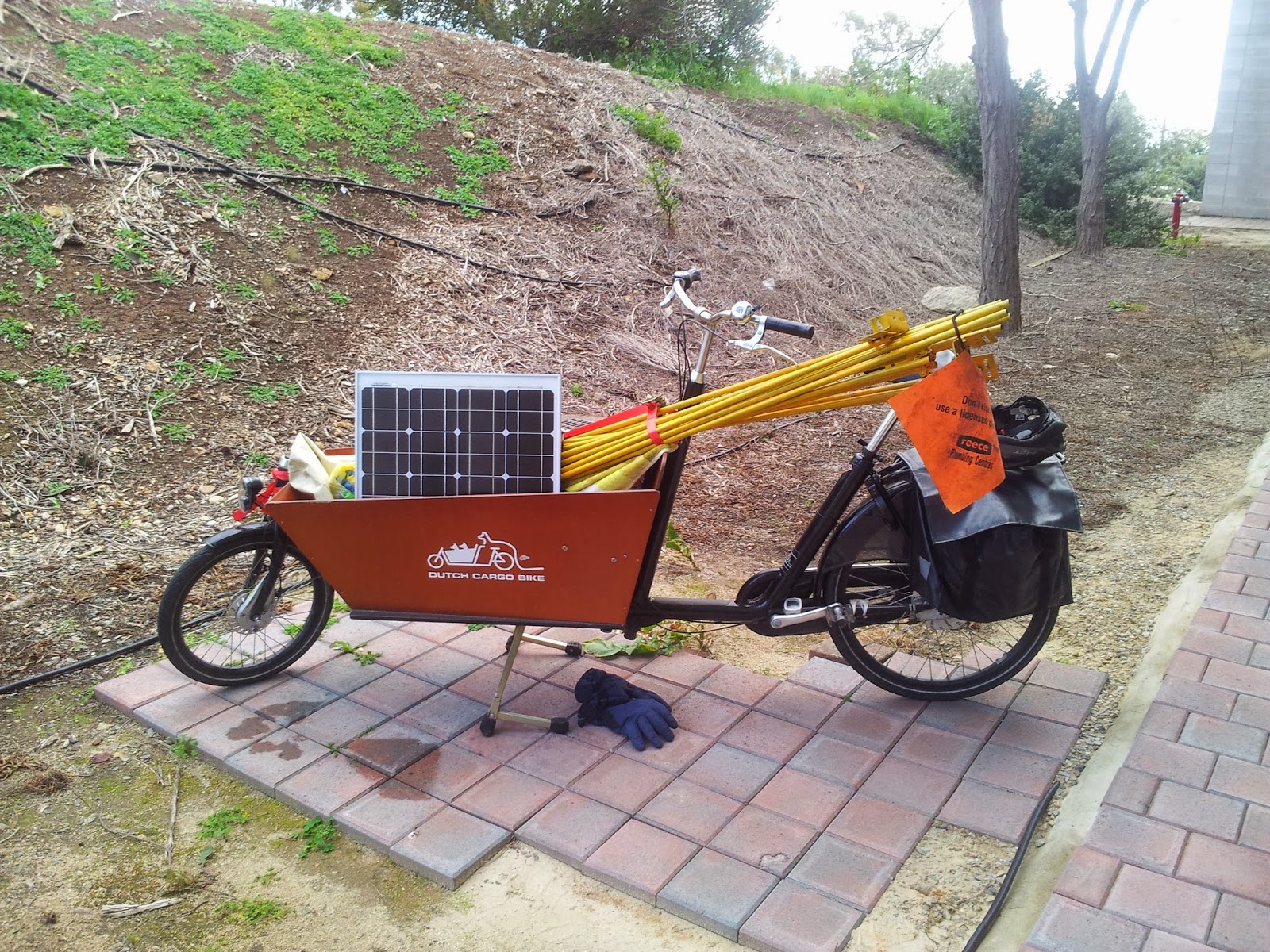 Then it was driving north on the highway, staying at Hawker and Leigh Creek for the school visits before leaving the bitumen at Copley to head over to Arkaroola.  Fortunately the roads were all open and in quite good condition: 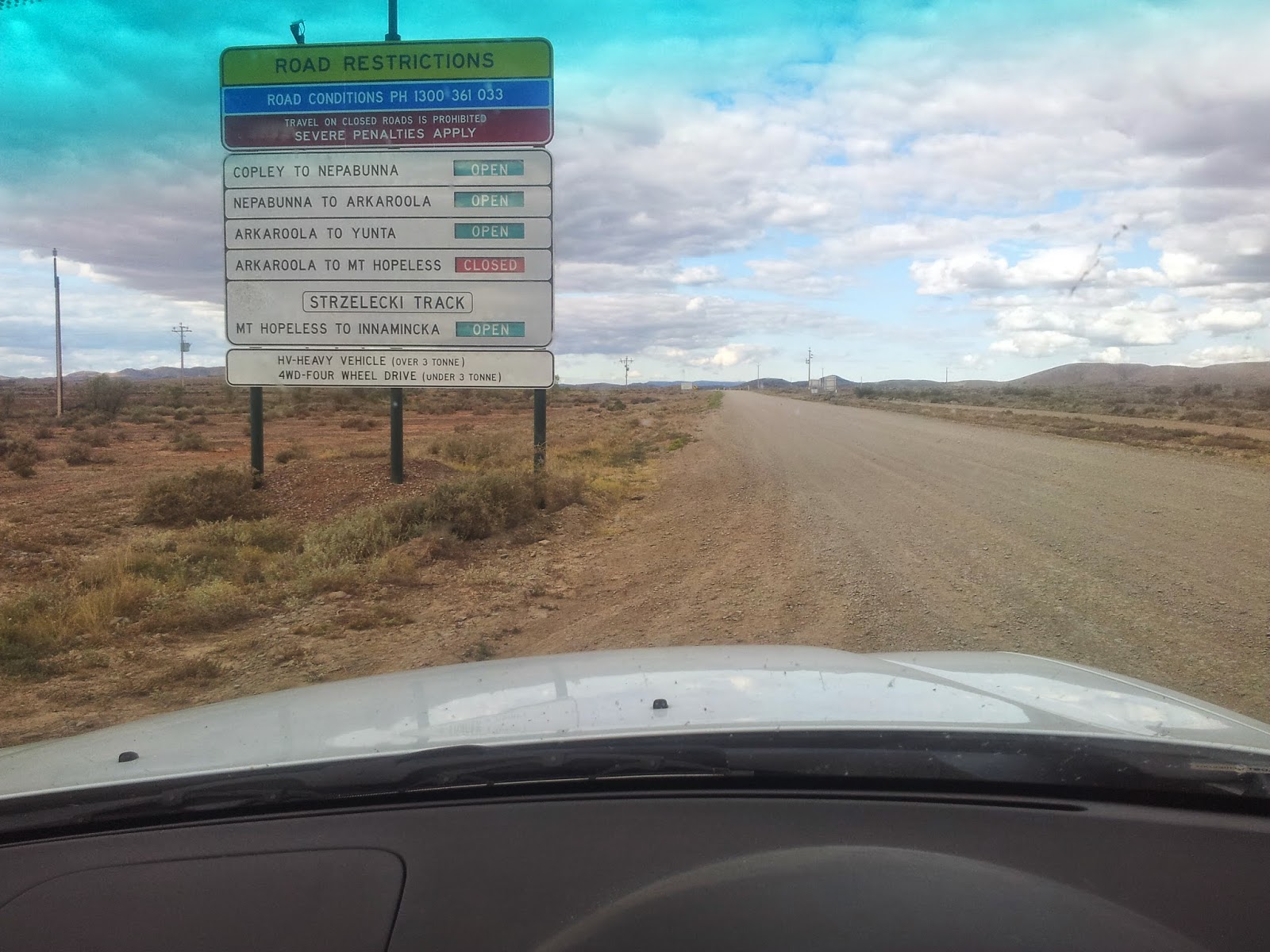 We arrived at Arkaroola about 5:30pm after dodging lots of Yellow Footed Rock Wallabies.  It was great to see so many of them, as they were very endangered in the past, but with a lot of conservation support have made a great bounce back.

Here is the Arkaroola Village, as viewed from up by the newer observatory: 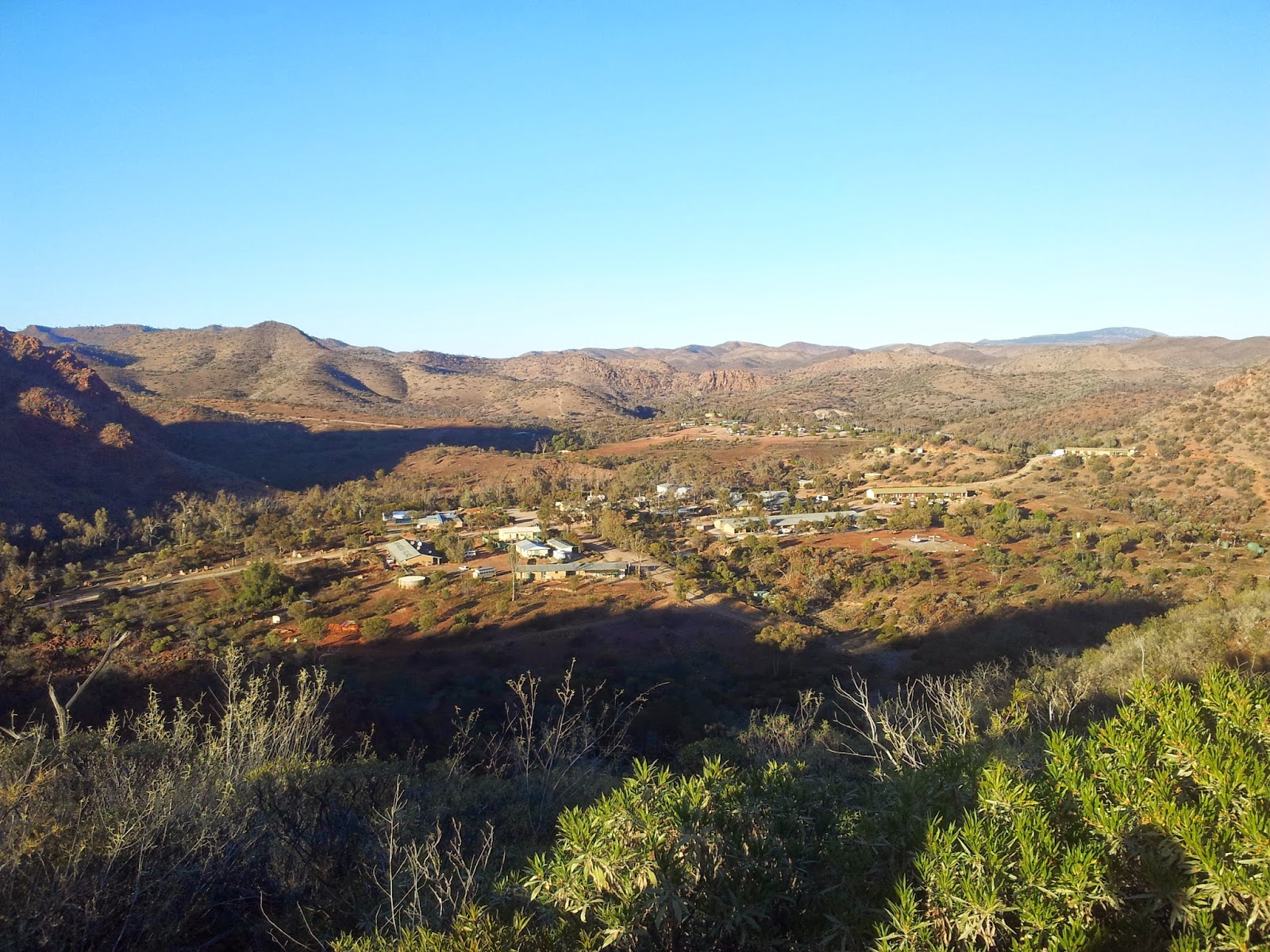 It was great to be travelling as a family, and our kids had a pretty good time, even if Caleb didn't always want to be photographed. 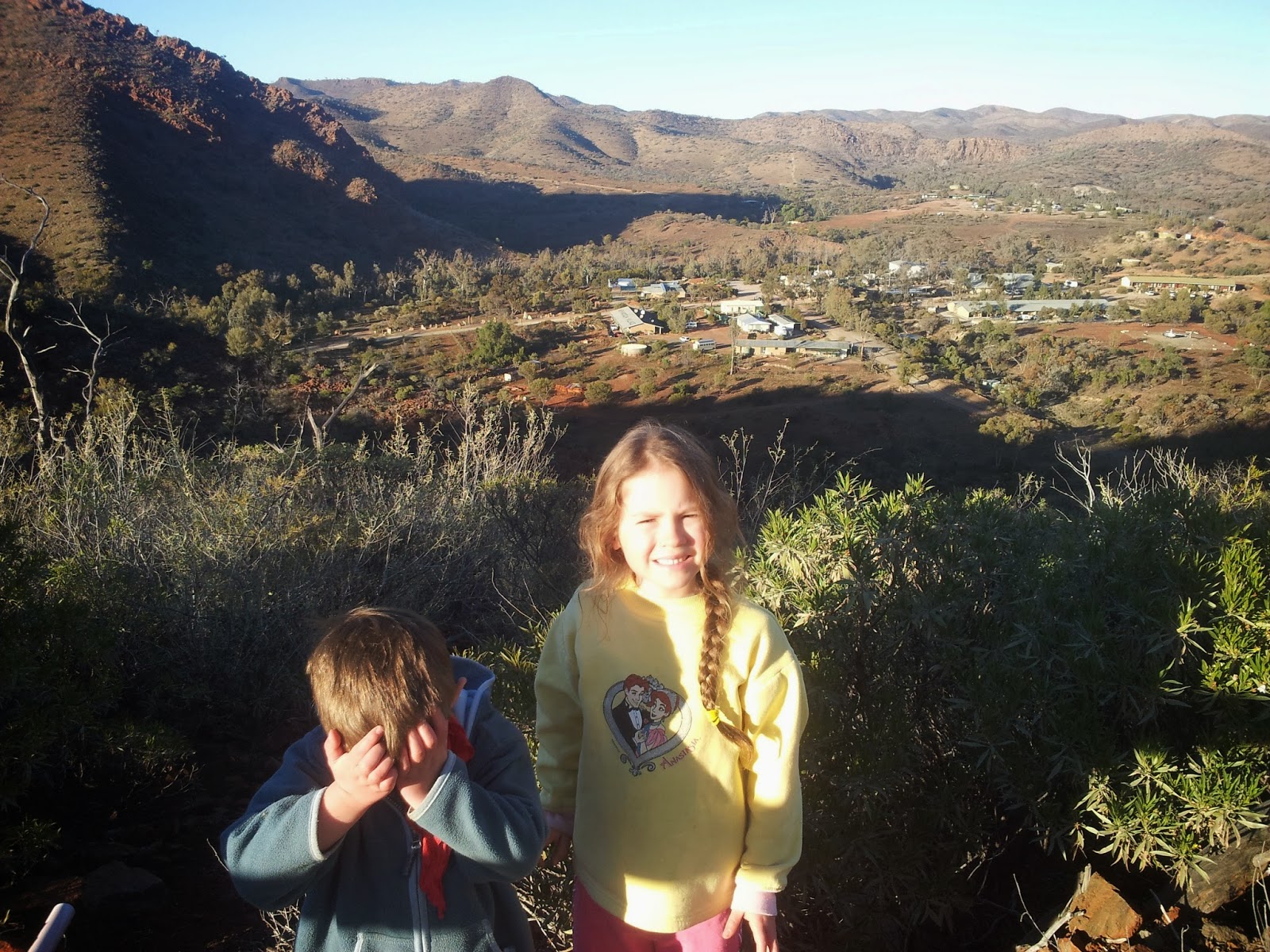 There is always a lot to see if you take the time to look around at Arkaroola, although a phone camera is not the best way to capture it.  As a result the following shot is a bit of a where's-Wally to find the parrot in the shot. 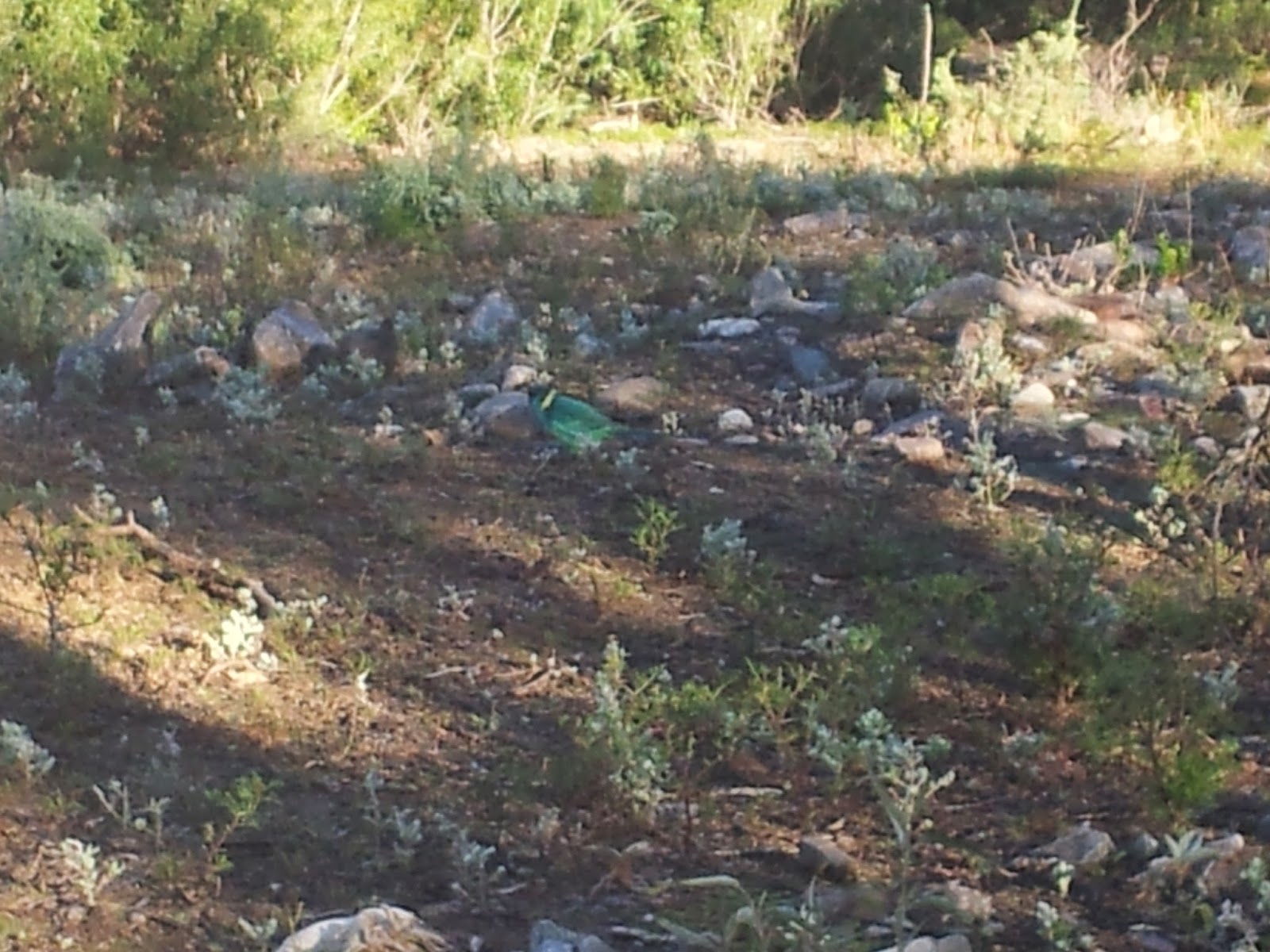 After the pre-breakfast walk it was time for the first of our hands-on sessions as we set about trying to install the communications link.

It was great to have a group of seven people for most of the morning as we tried climbing a few possible locations to mount the dishes, talking about the technology and various other things along the way.  Here is one of the older in our group as we picked our way down from the summit above the old observatory trying (in vain) to see the homestead vantage point.  I did have a shot with the whole group, but it seems to have been lost. 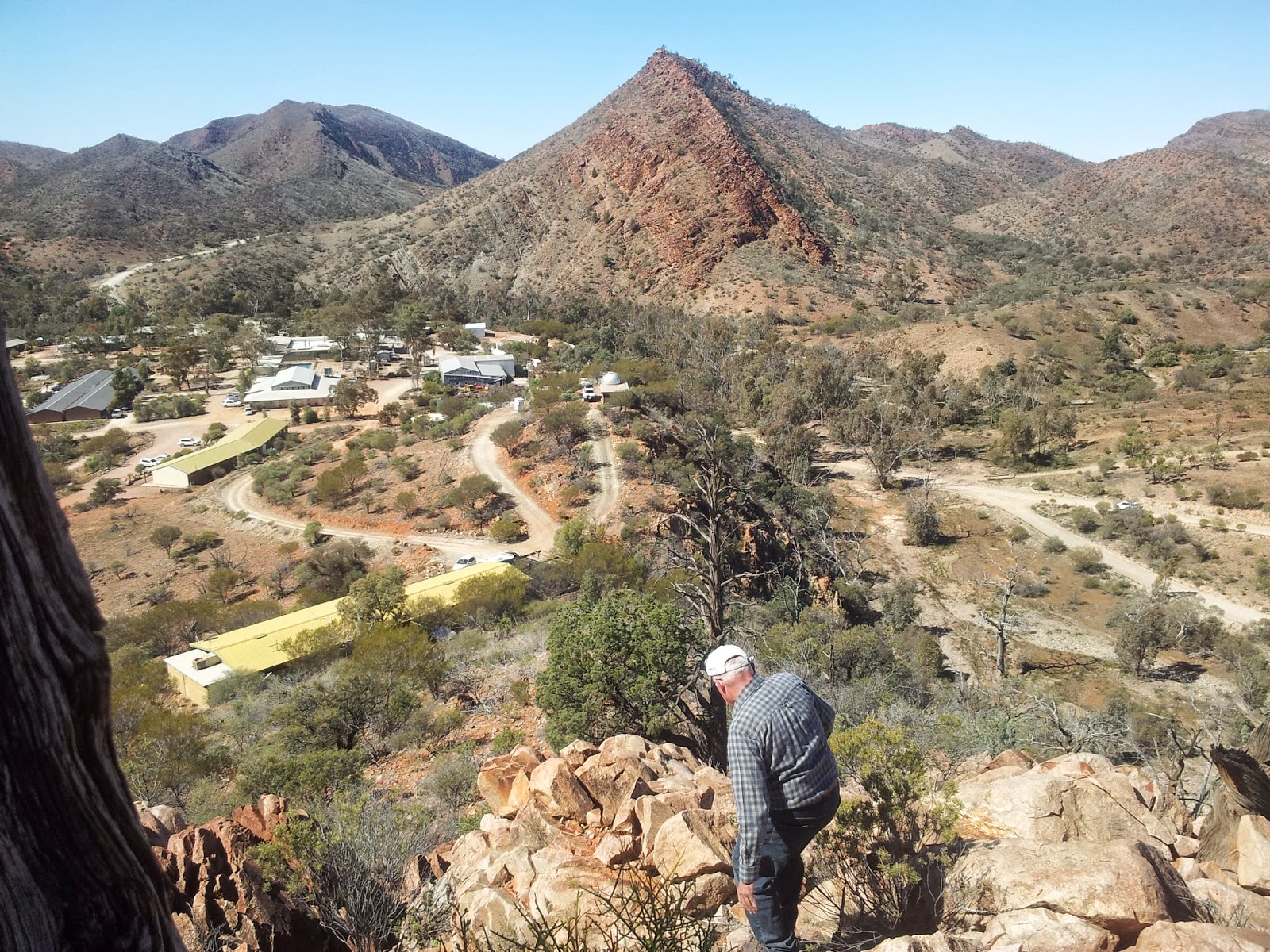 Here is the "Telstra pit" on the top of the vantage point behind the homestead that we were trying to see from by the old observatory.  This pit carries the land line from the Telstra microwave relay on the vantage point down to the homestead.  We did have a chuckle about the in-congruency of the nice neat cement pit cover and plastic pit liner sitting above the ground, with the cable then proceeding fully exposed down the hill side.  That said, the ground is basically ironstone, and the slope is quite steep, so we totally that understand Telstra didn't want to dig a ditch all the way. 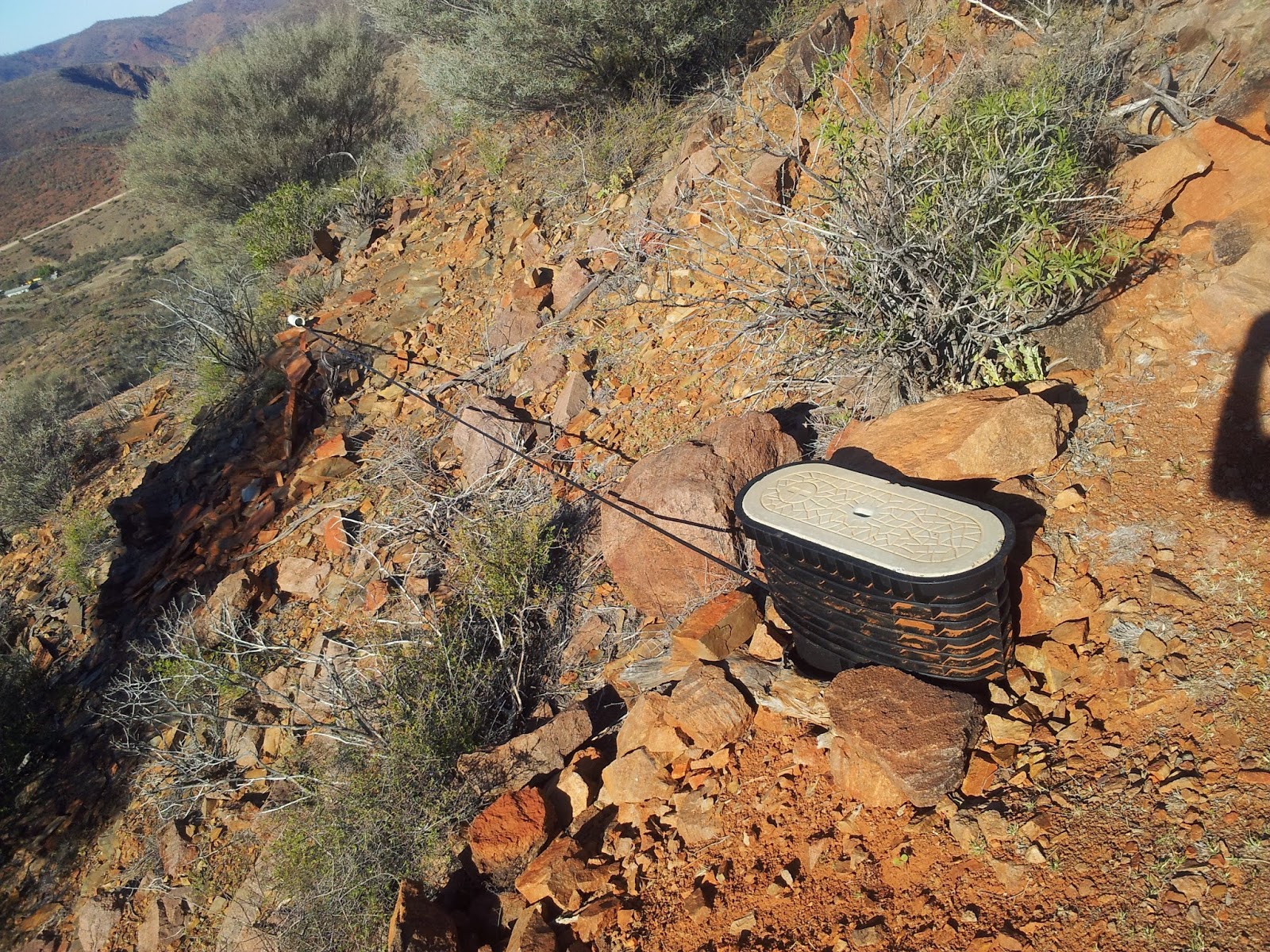 Here is John, one of the group up on the vantage point. You can see Telstra's big microwave relay tower and electronics cabinet here.  That extra 15m height at each end makes all the difference for being able to get line-of-sight back to the old observatory. 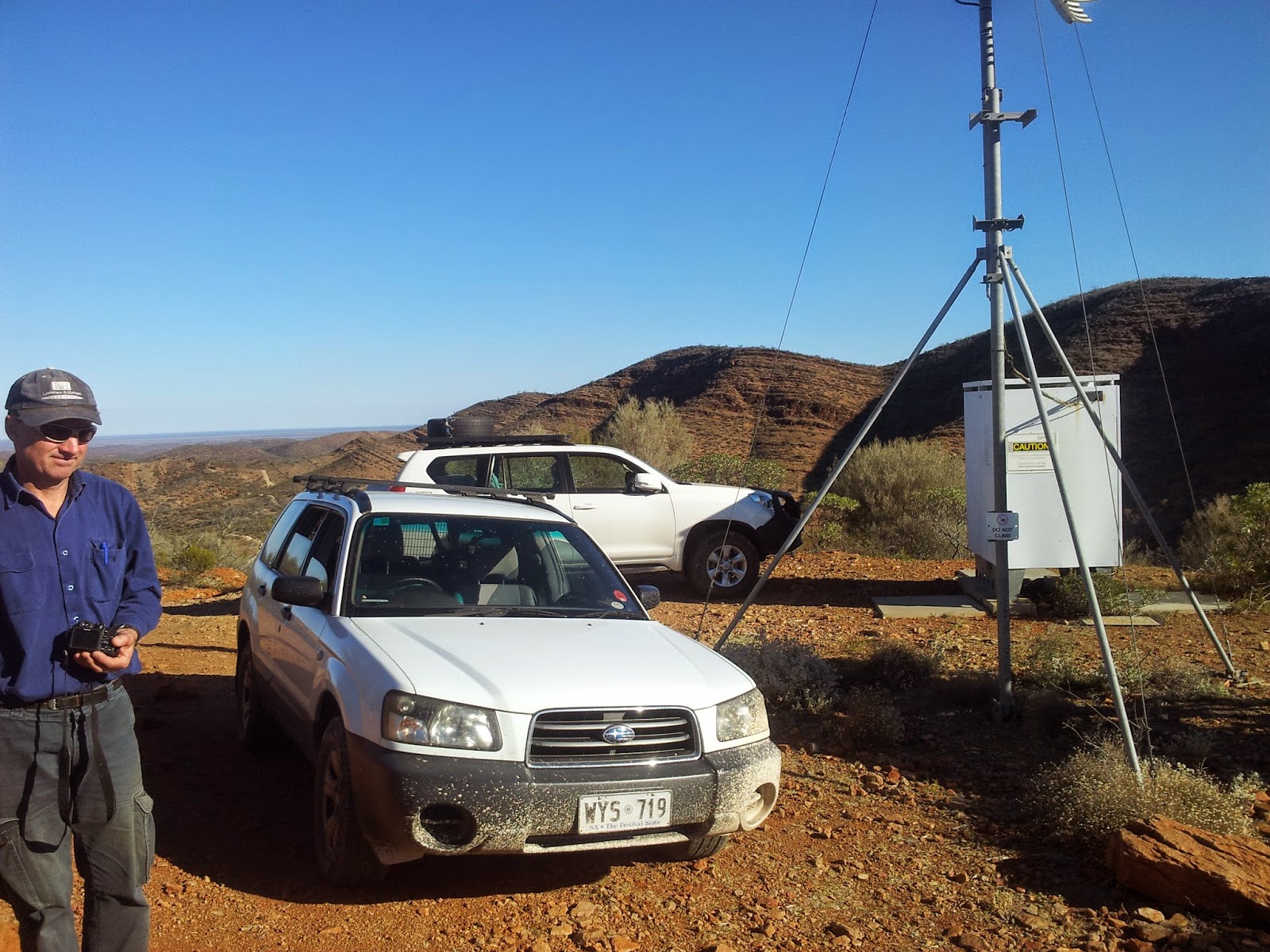 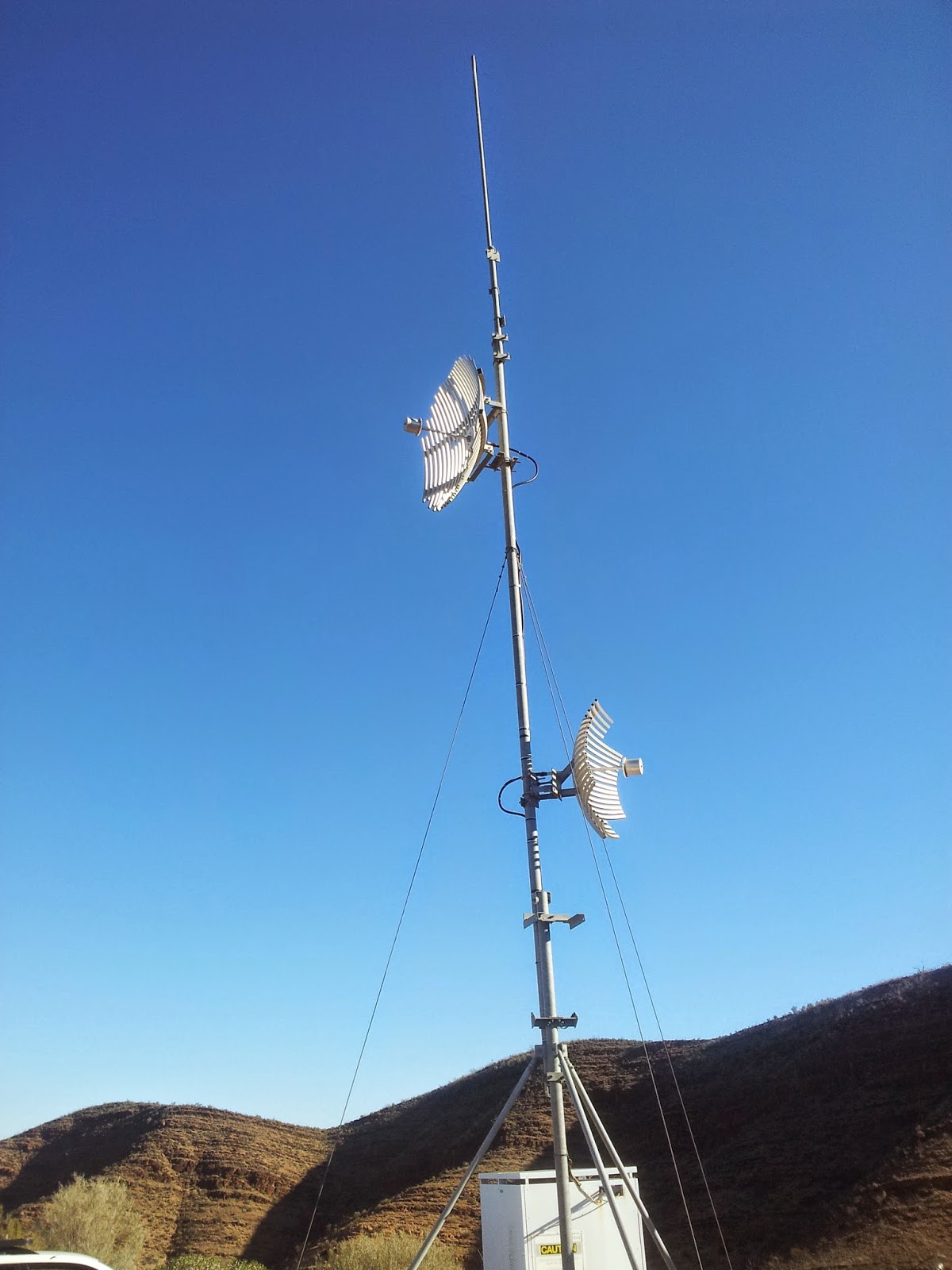 This is the view back towards the old observatory and village.  Neither are visible thanks to the low hill in the middle of the background. 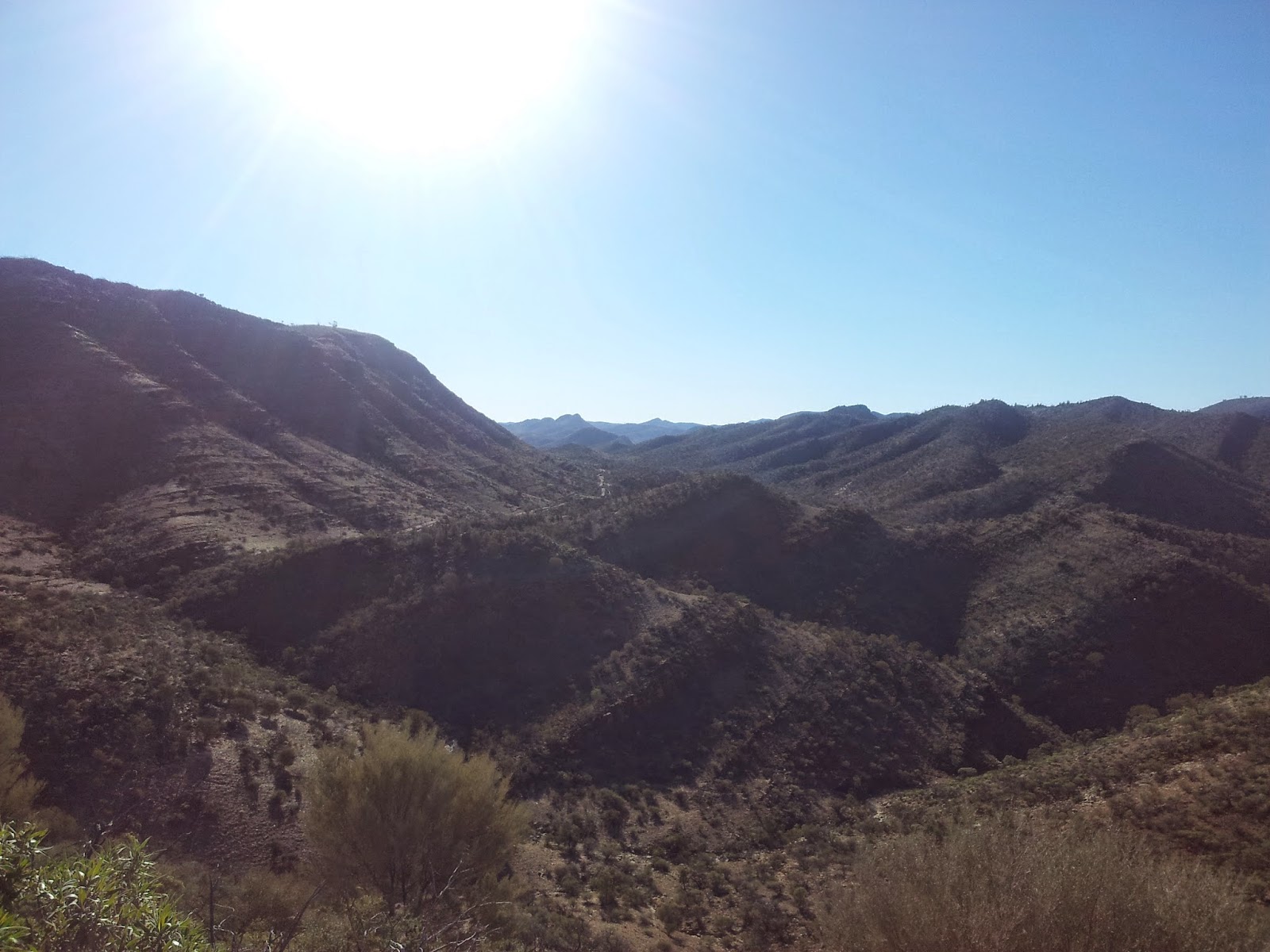 My wife and daughter had a quick game of badminton on the hill top while we came to realise that we would have to run the link down the other side of the range. 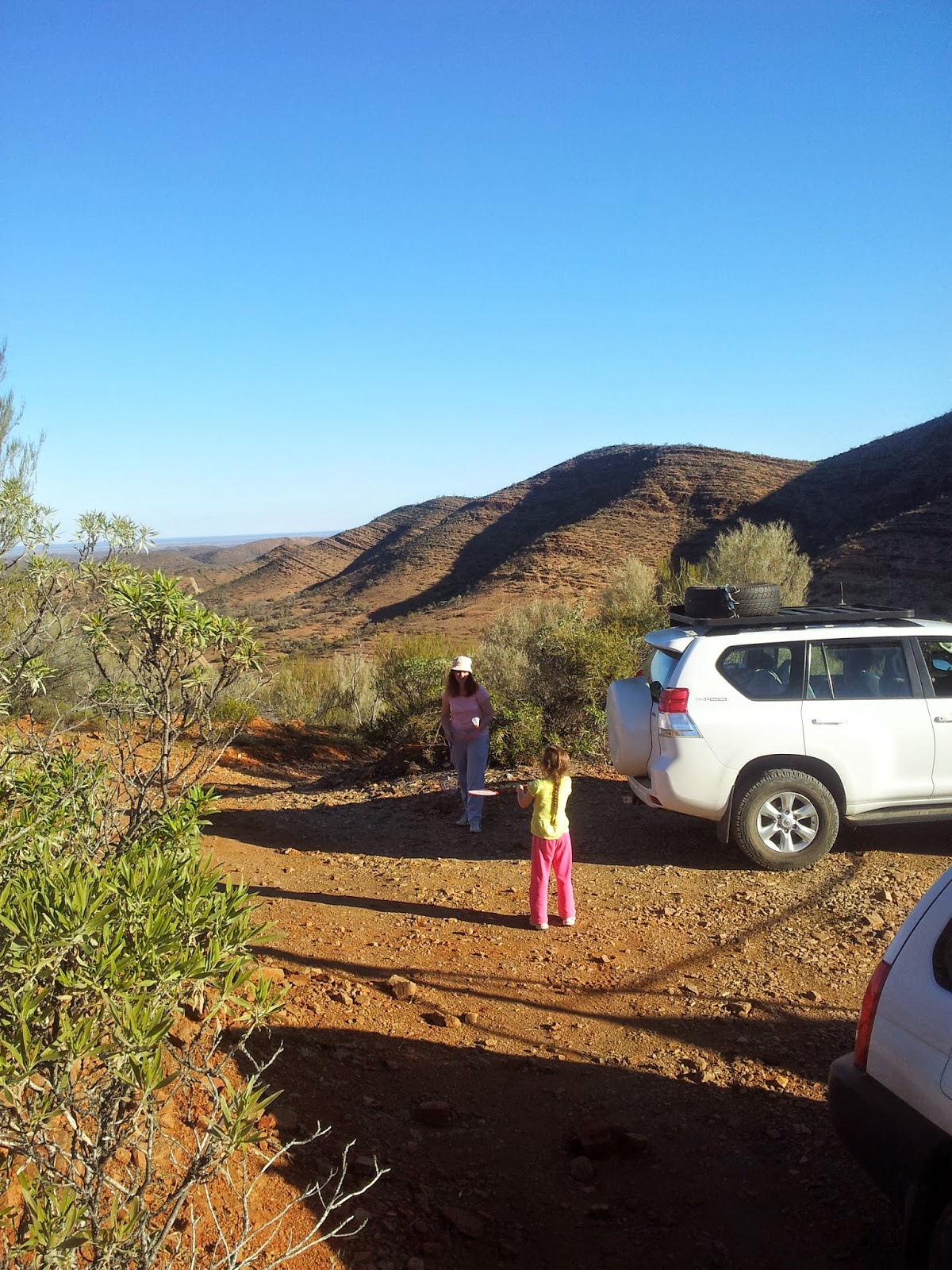 The trail-head map shows the village and Arkaroola Station.  We had been trying to get a link roughly along the Station Backtrack.  Now our attention was turning to the Acacia Ridge, where we knew there was good line of sight, but access would be more difficult, requiring a 1 hour walk up to the ridge line. 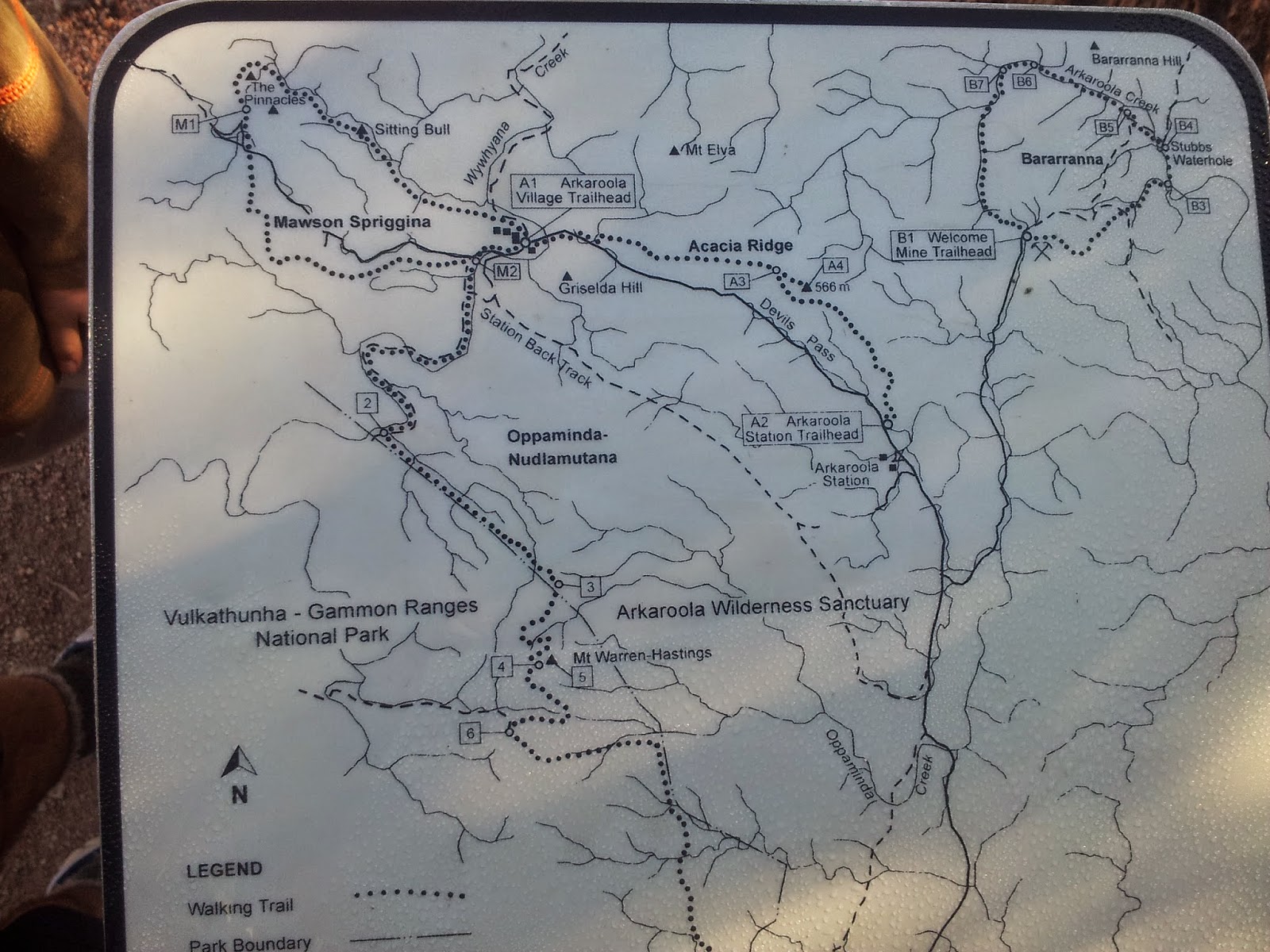 Instead of walking up to the ridge, we decided that it would be more fun to give John the chance to setup a temporary link between the two observatories, to get an idea of how to aim the dishes.

Unfortunately some the pole in the handy location was too fat for the mount: 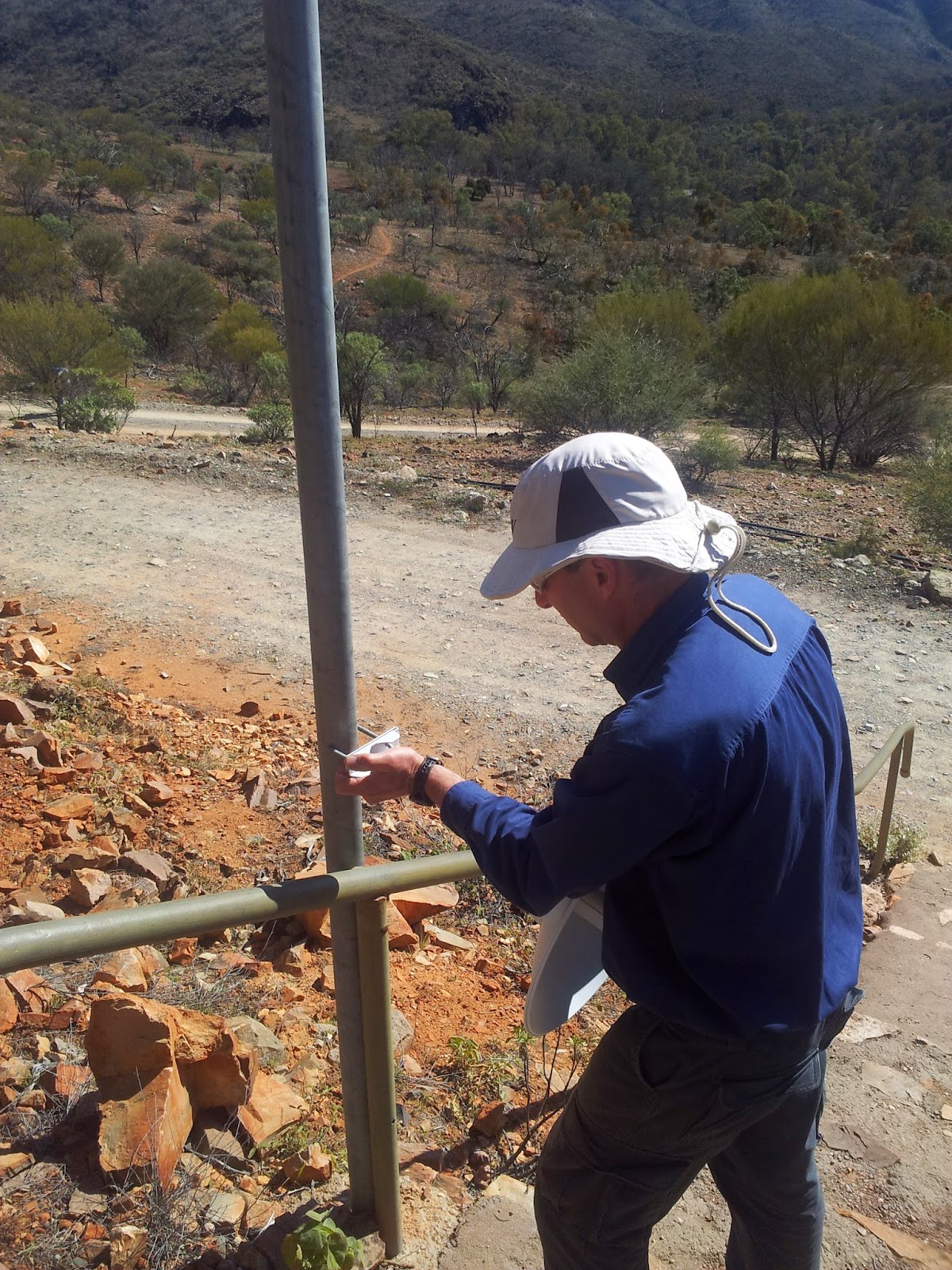 So we attached it to the fence rail instead: 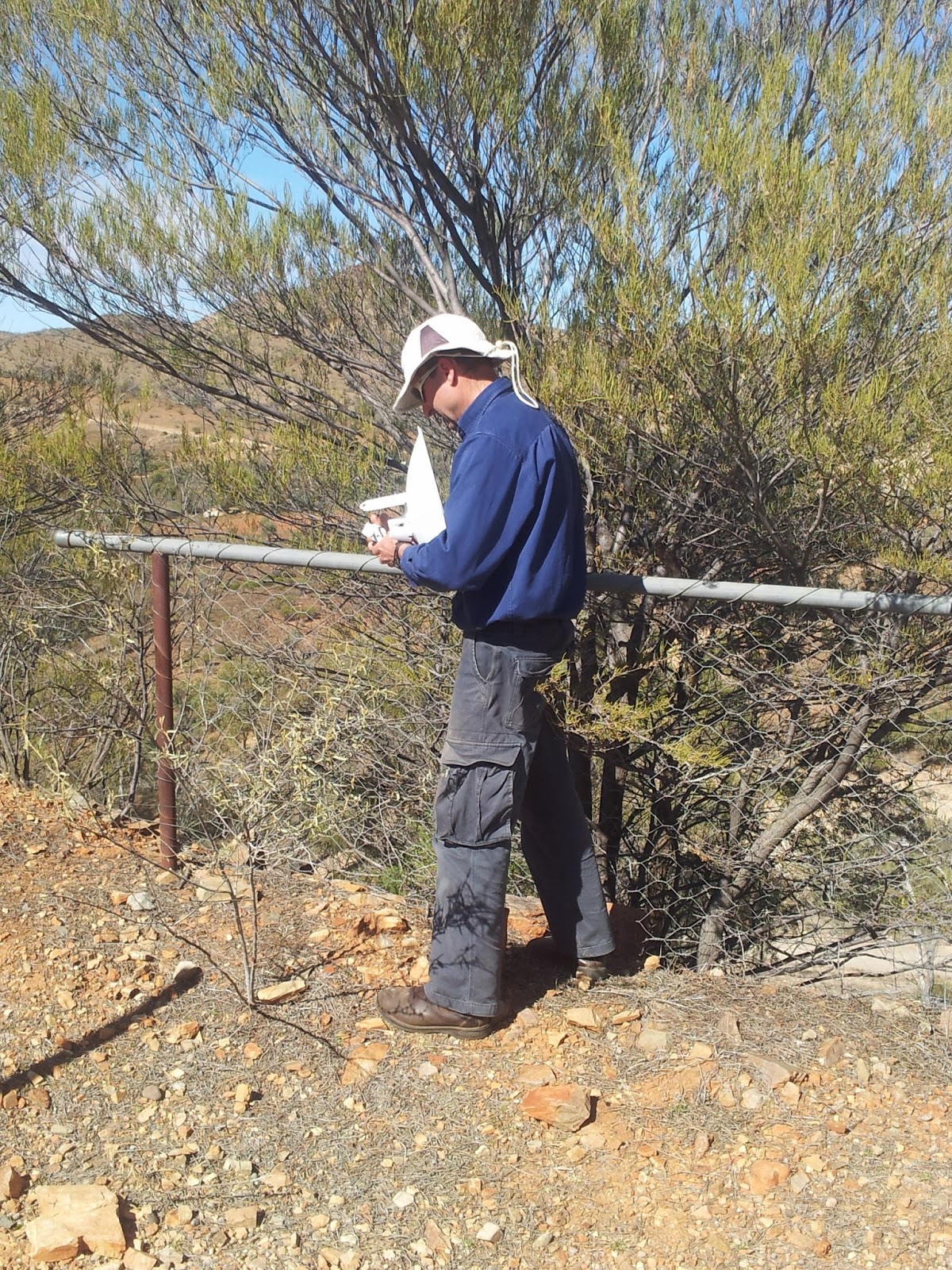 It's a bit tricky to tighten up, but we got there: 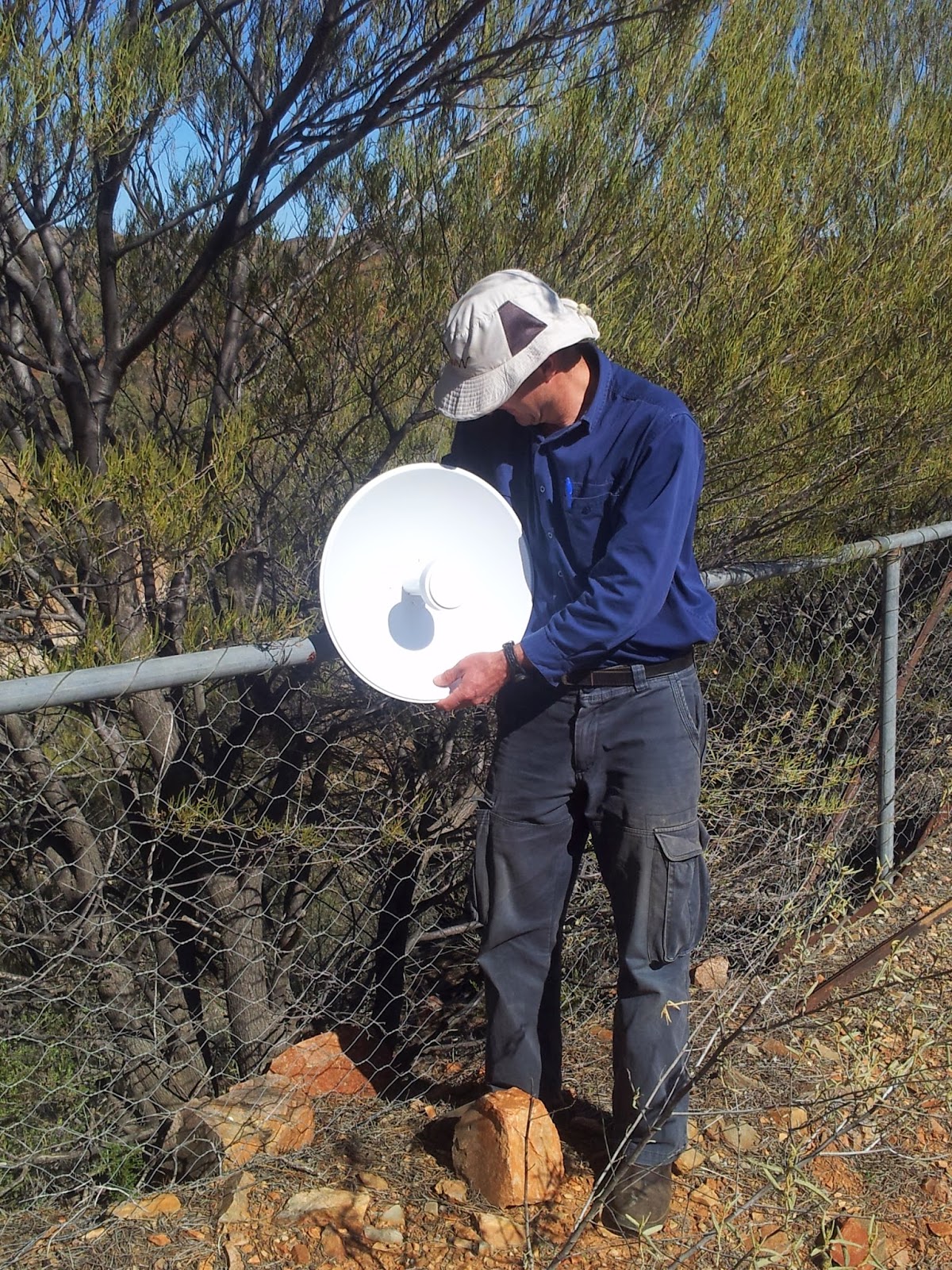 A quick visual inspection to see that the dish was more or less aimed in the right direction. We would come back later to trim the direction, only to discover we had it pointed perfectly to begin with. 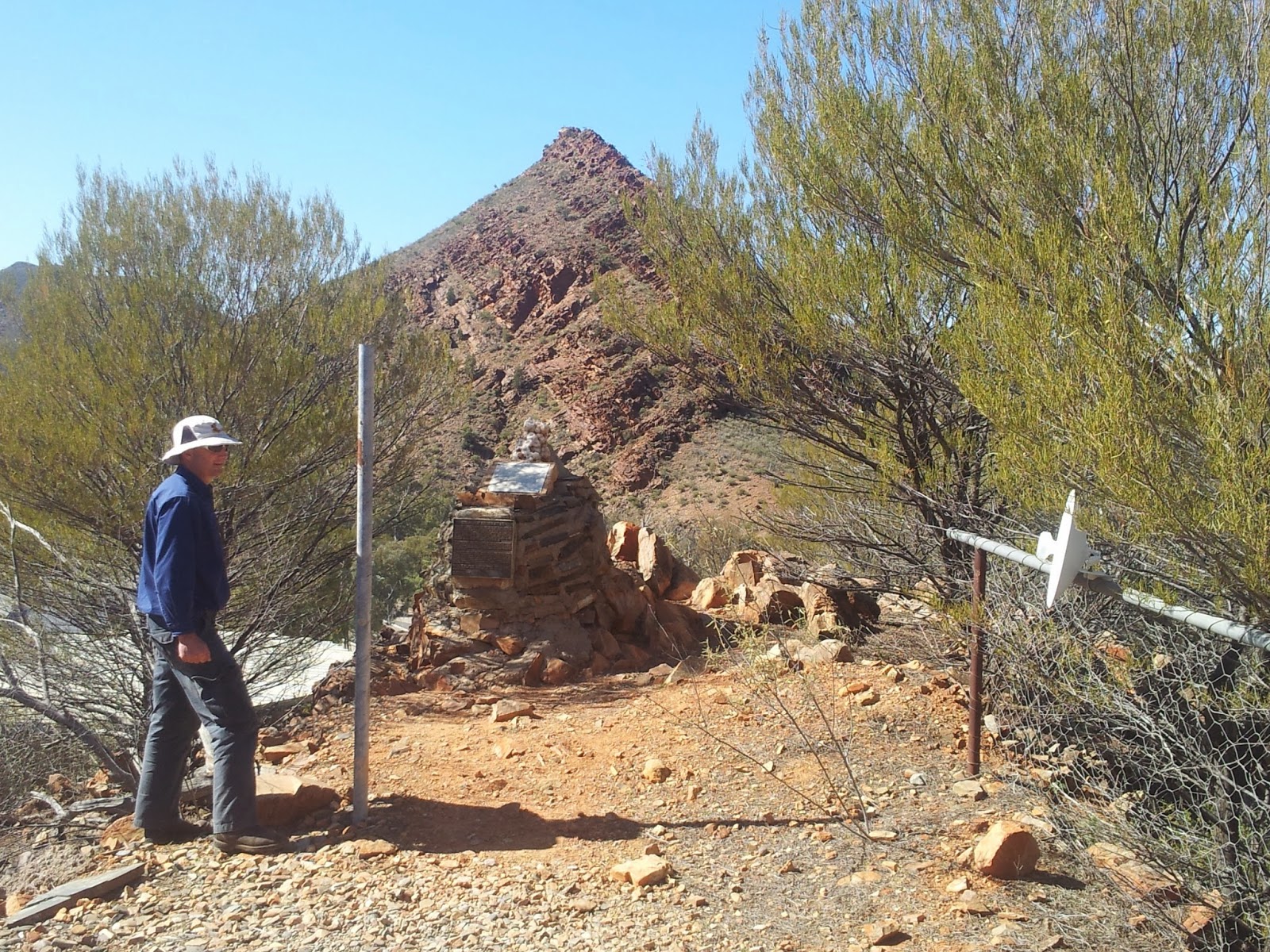 It was back to the new observatory to pick a mounting point.  Lots of big I-section here, too large to clamp onto.  If you look at the full resolution image you can just make out the dish above the green-roofed building right of centre: 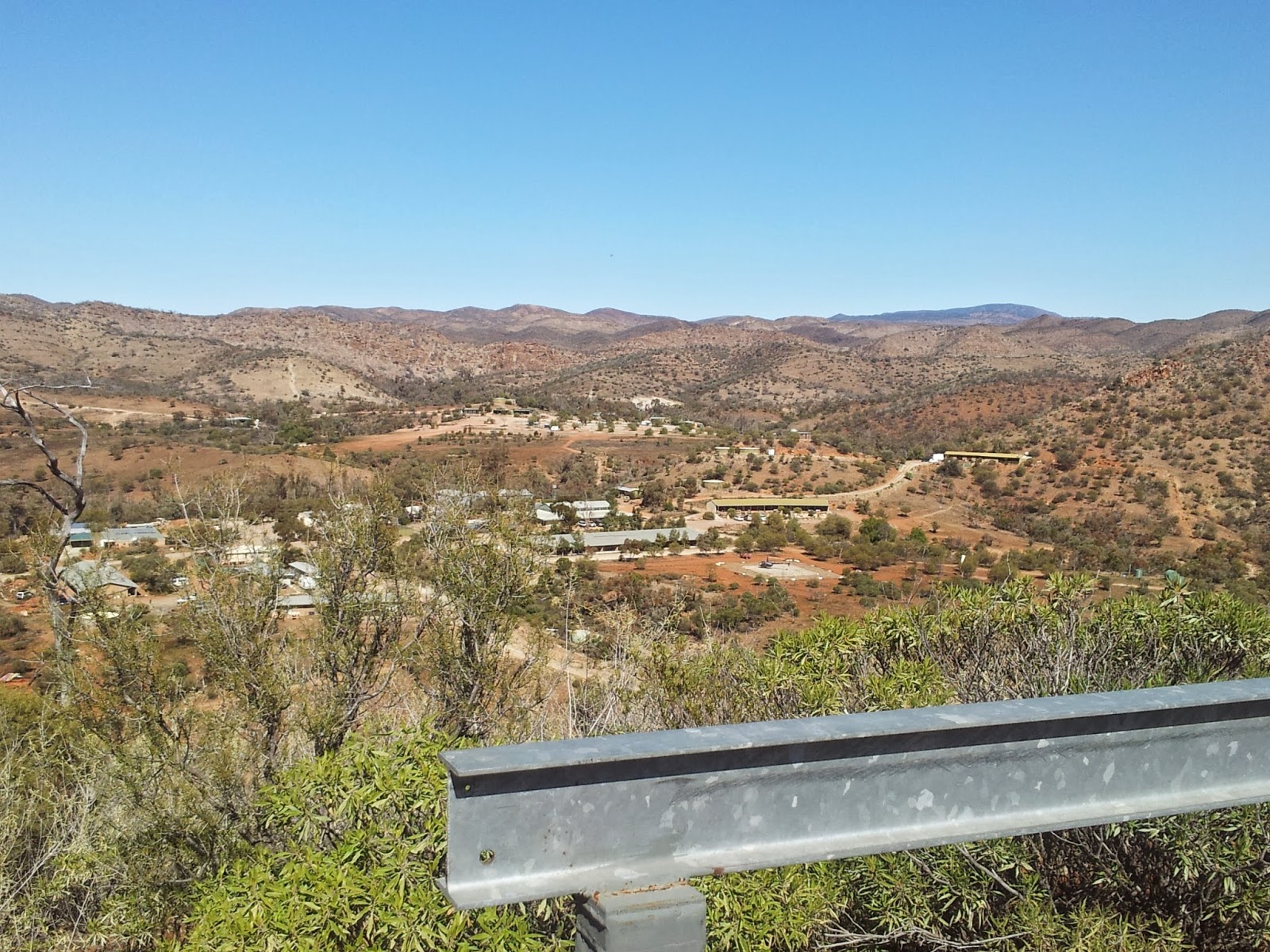 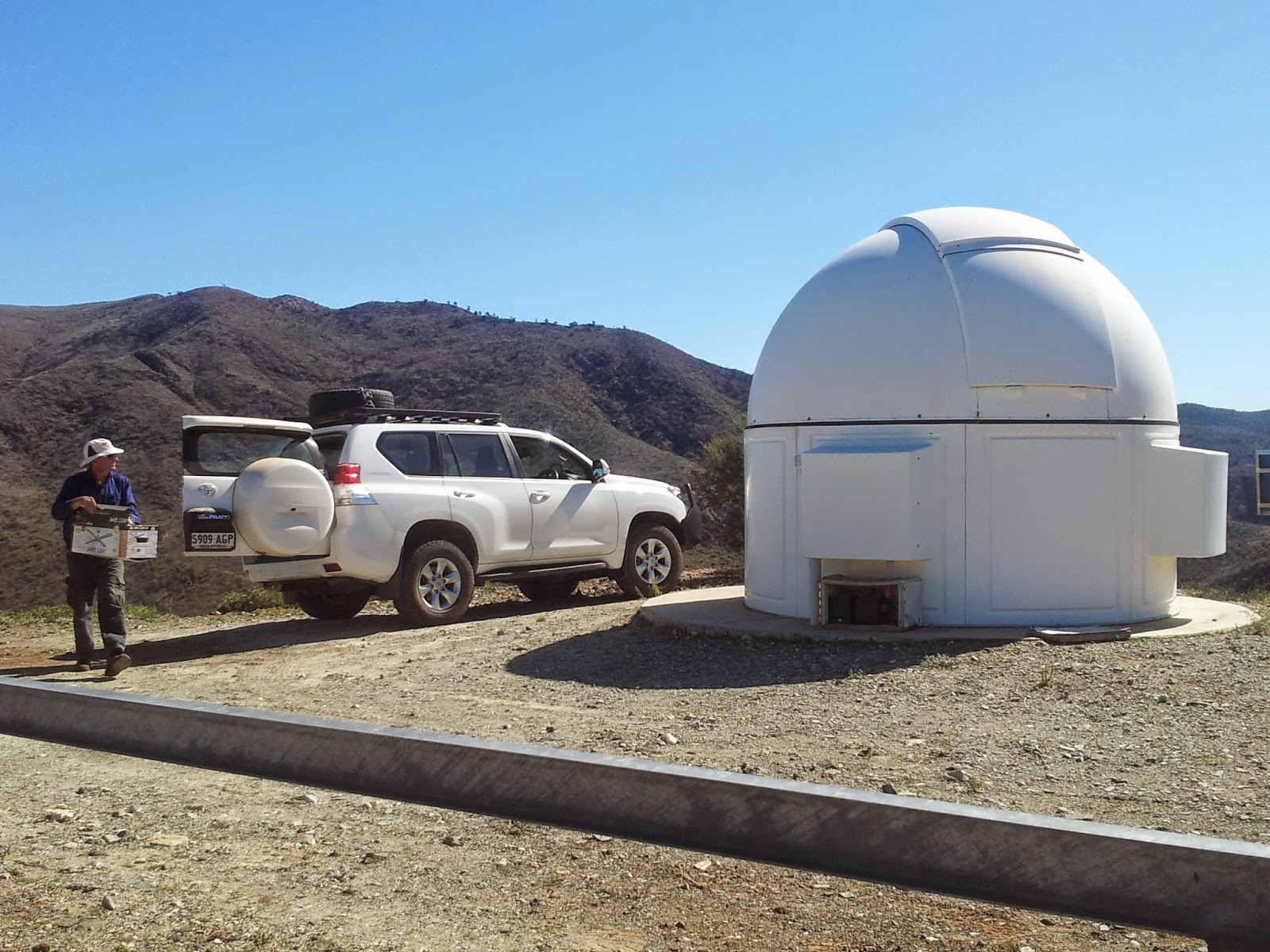 Then applying a bit of bush ingenuity to make a mount that we could attach to: 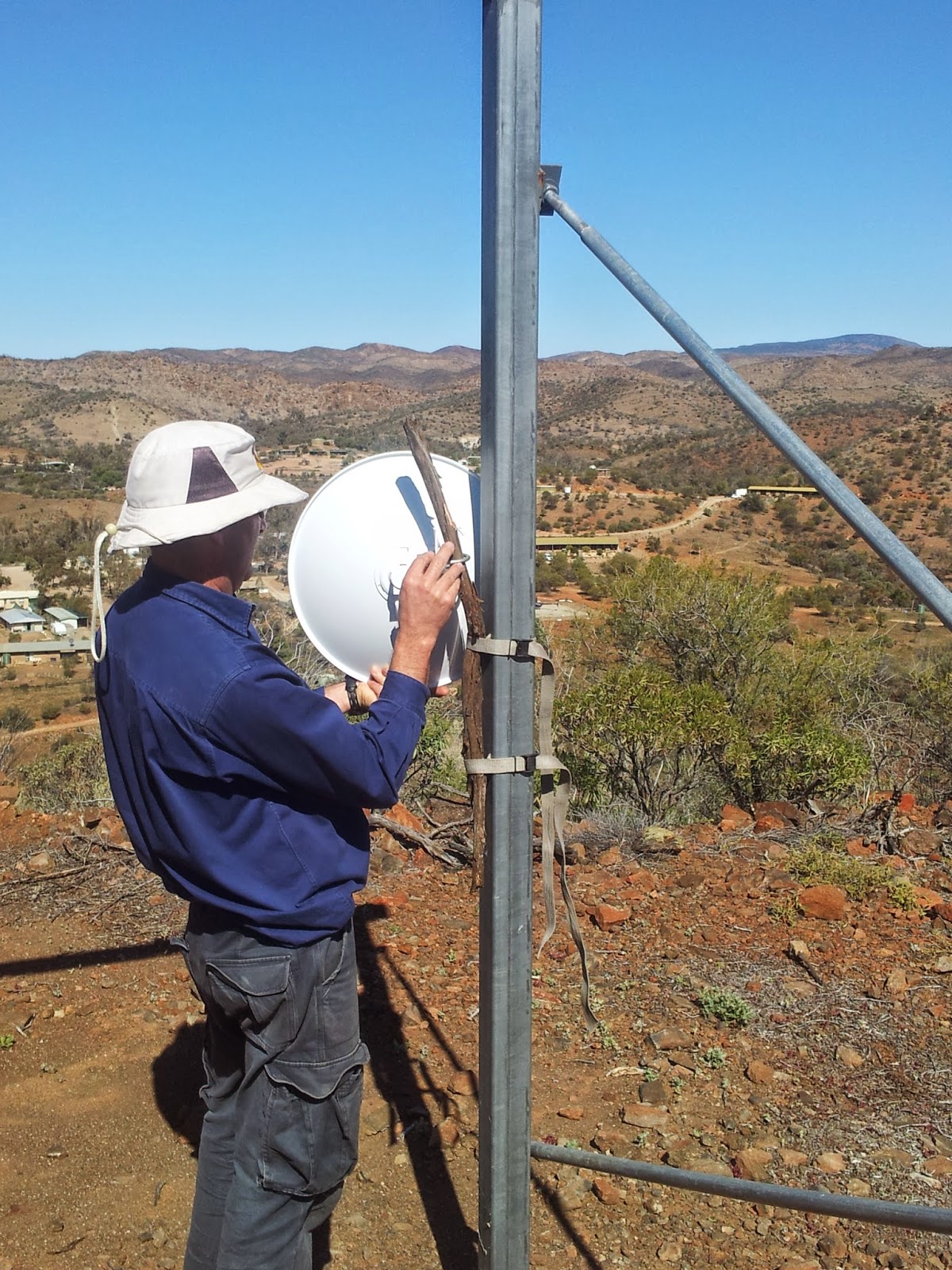 And a few minutes later we had a nicely aimed dish: 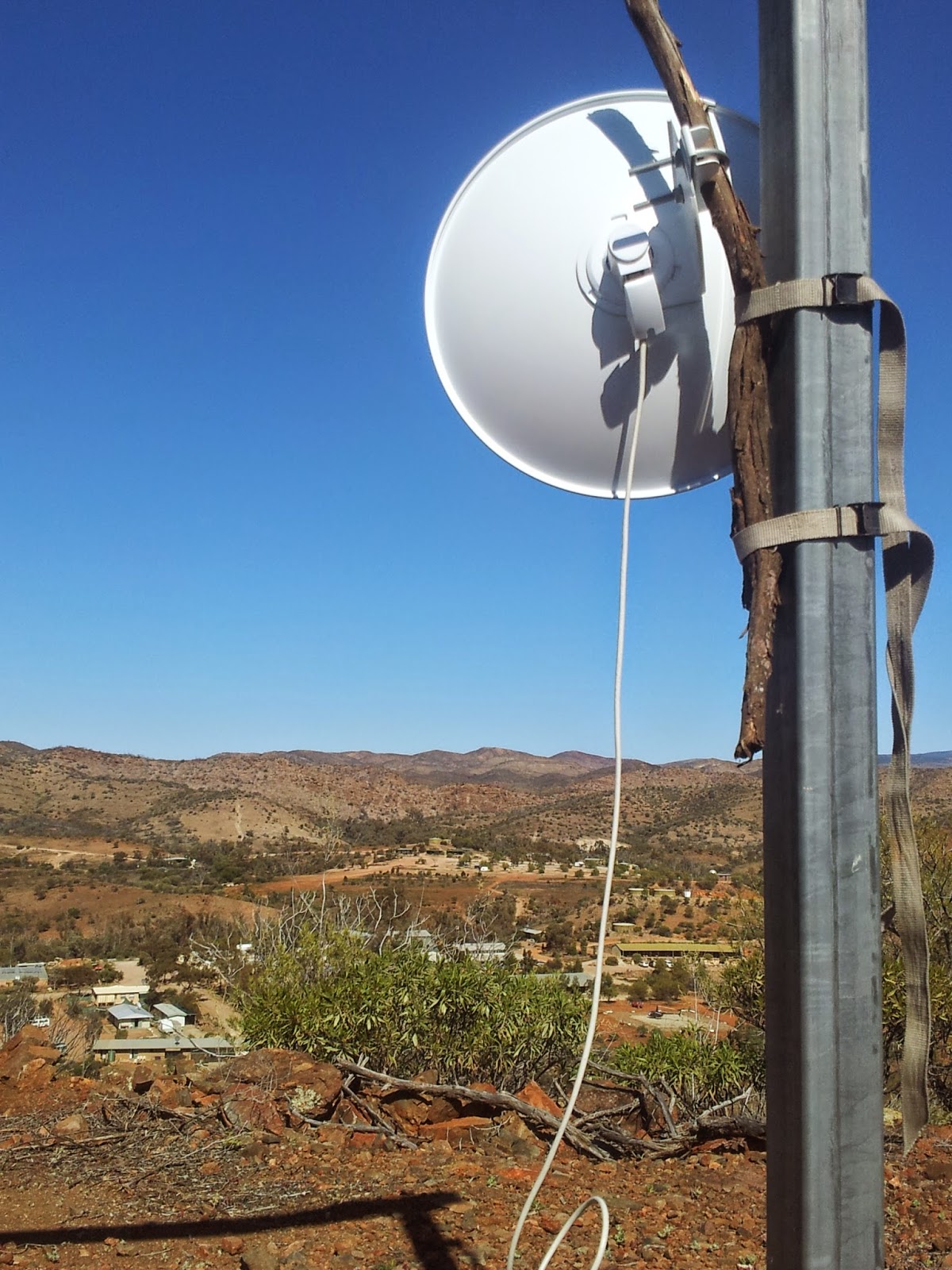 Connect the battery, and aim it up, and obtain a very nice 55dB link margin at 300 mega-bits/second. 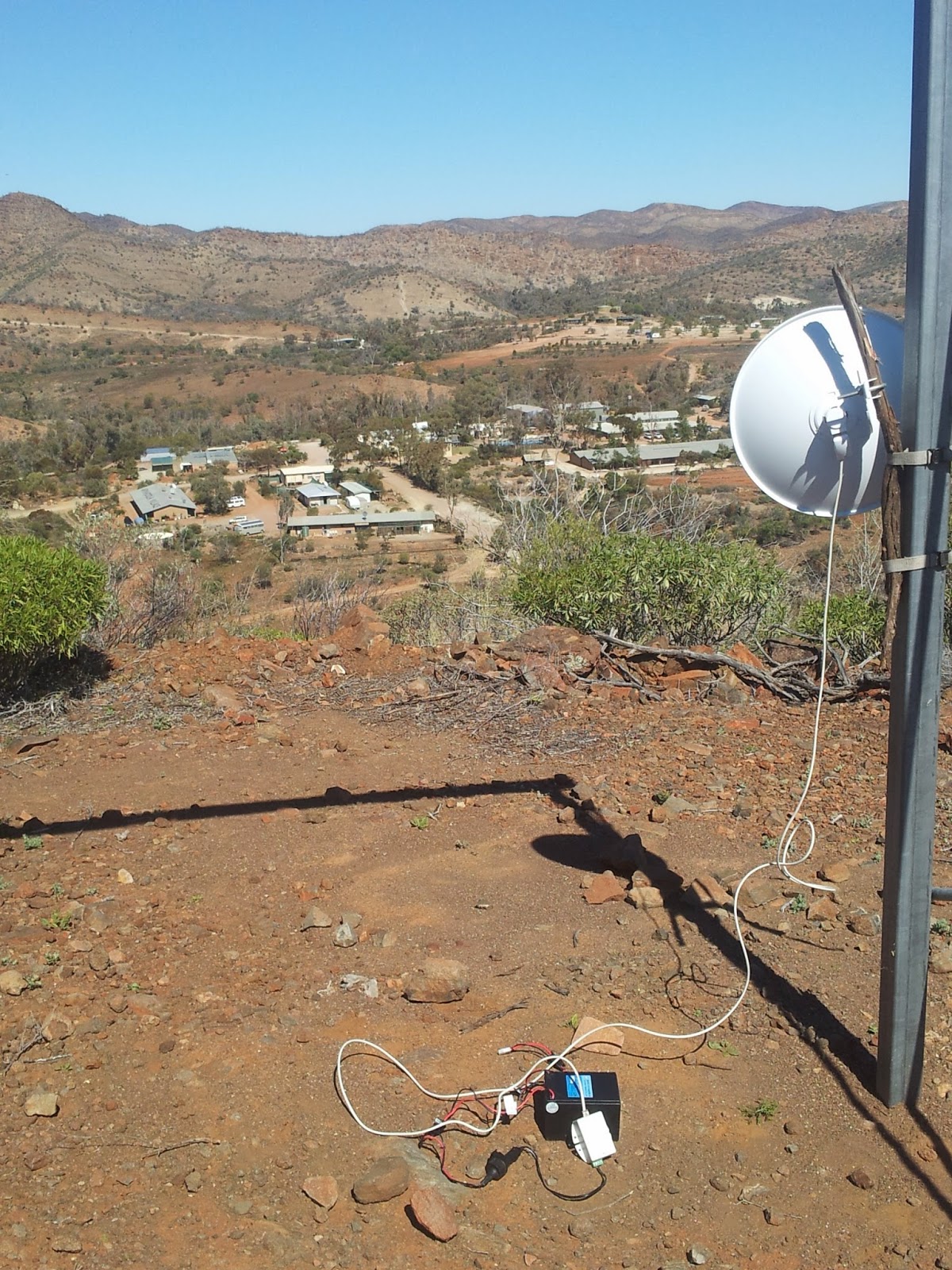 Due to the difficult access on the ridge, we didn't have enough time left to actually install the permanent link, although we did spend some time with Marg Sprigg to work out exactly where to mount the hardware at the homestead and village when we head back up in October.

We did however have a little time to enjoy some of the beautiful landscape, the following shot just 50 metres from our accommodation.  The natural history, amazing minerology of Arkaroola is a whole other dimension to explore. 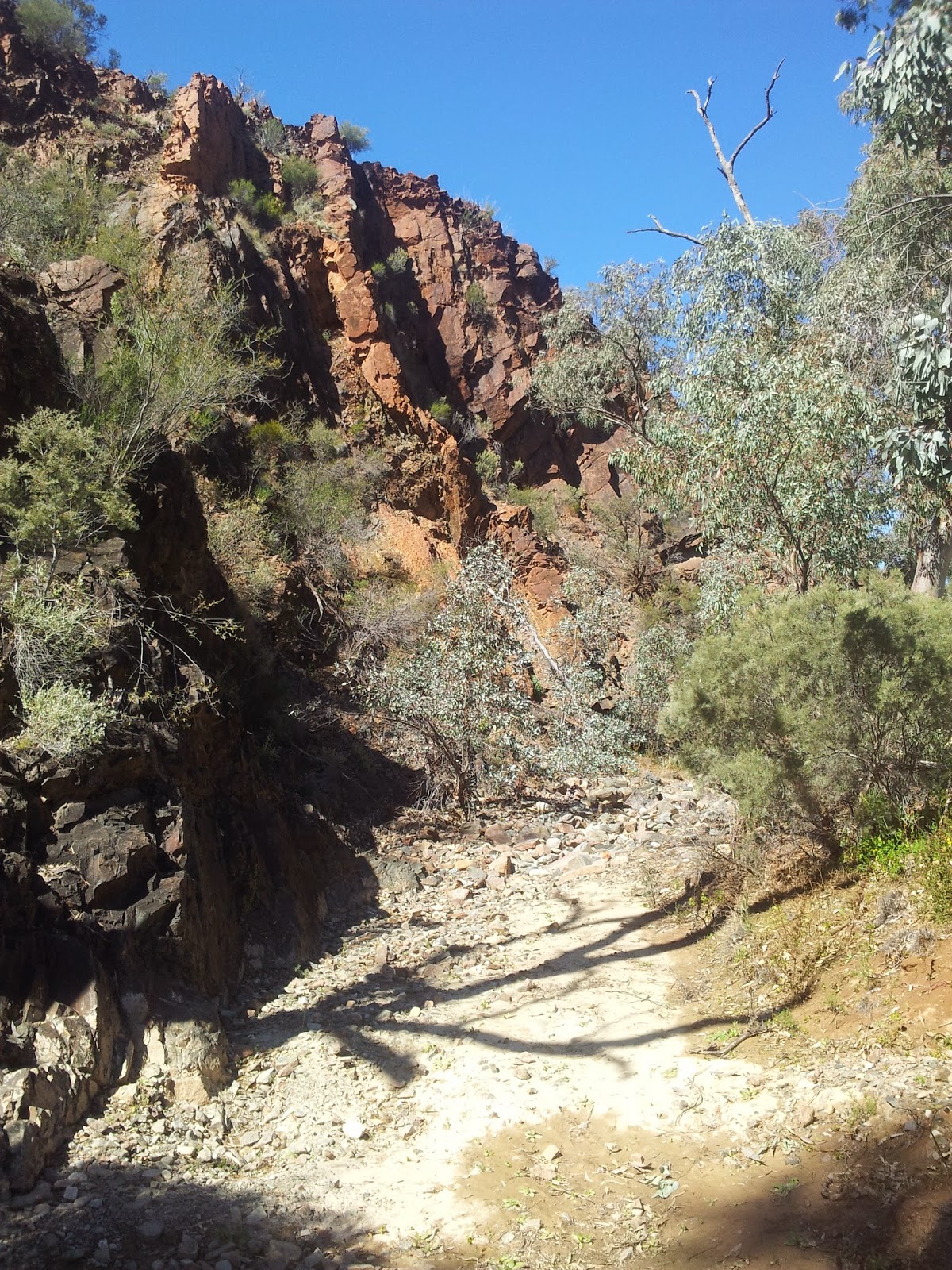 Caleb found a few minutes to chat to the bar staff, and then it was time to head home. 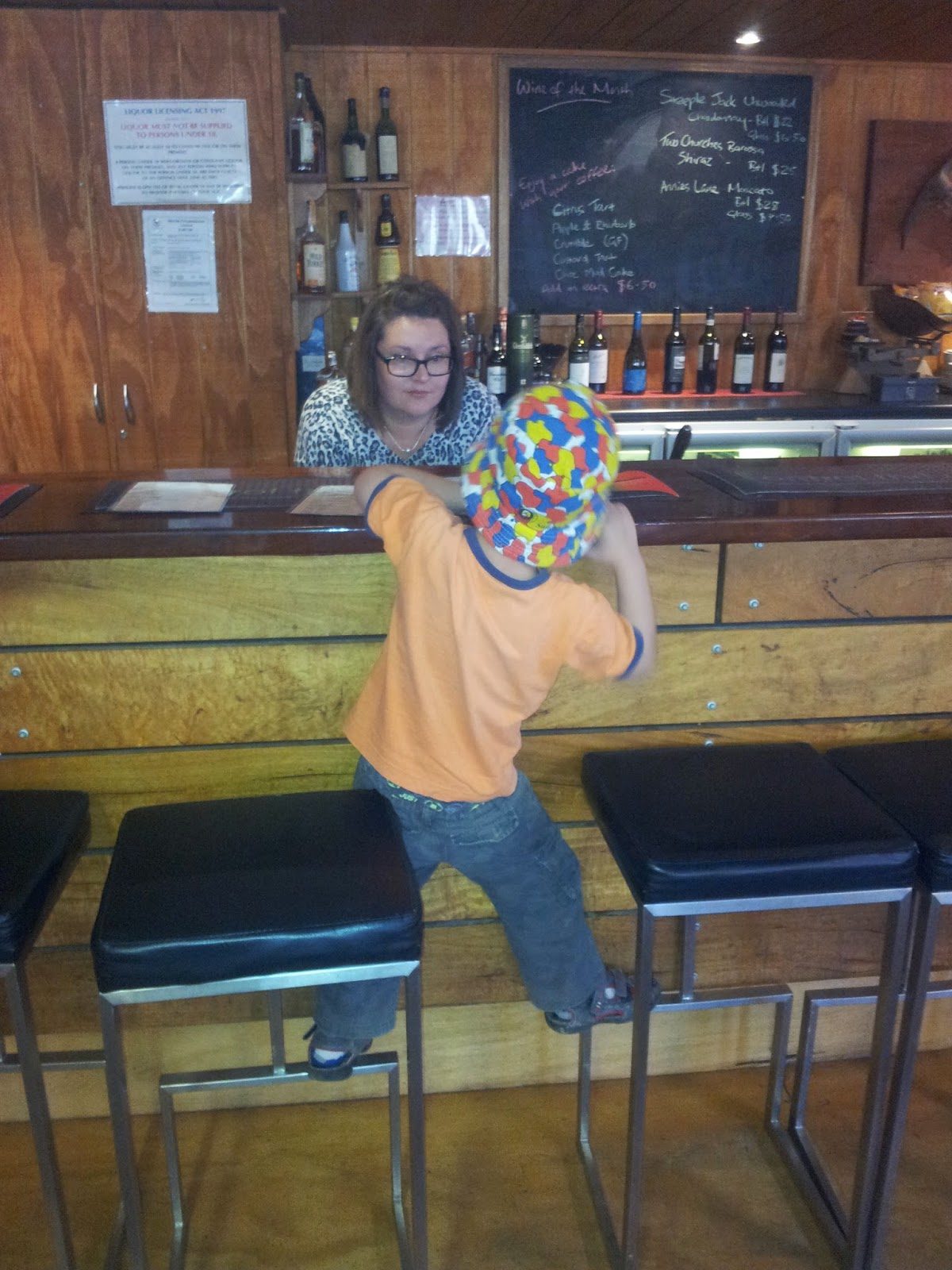 Posted by Paul Gardner-Stephen at 1:14 AM