I have just spent the day working on field upgradability for the serval mesh extender prototypes.

Note that the following is how updates for the prototypes work at present. We expect that this may change over time, and is likely to be different in the final products.

Updates to servald will be supported in two different ways.

First, it will be possible to pull the USB memory stick from the unit and copy the new servald binary onto the stick.

Second, if there is no servald binary on the USB memory stick, then it will look for an update via Rhizome.  If there is an update, it will install it.  As with all Rhizome files, the updates are cryptographically protected so that only genuine updates will be accepted.

None of the update functions are automatic, because we want to place updates entirely under user control, as a partial protection against network poisoning attacks.

To effect an update (or to restart the servald on a mesh extender without turning it off and on again), just press the WPS button on the MR3020 router.

Of course, if something stuffs up, for example you have a bad update on the USB memory stick, then hold the WPS button down for 10 seconds and it will "factory reset" back to the original servald that shipped with it.

More as we develop it.
Posted by Paul Gardner-Stephen at 12:13 AM No comments:

We were fortunate enough to win a National Science Week grant to run several events in the north of South Australia to demonstrate what we are doing primarily to school students in schools in regional and remote areas.  We were also able to include demonstrating the technology on a steam train.

Our itinerary took us from Adelaide to Port Augusta to Quorn to Hawker over two days.
The idea was to encourage students in the regional centre of Port Augusta and remote towns of Quorn and Hawker to see value and encourage an interest in science, technology, engineering and mathematics (STEM) subjects.

At Port Augusta we worked with 13 to 17 year olds, who quickly worked out how to use the Serval Mesh app on the phones we supplied.  We also had a visit from the local TV station, and we understand that they ran a story the following night.

Several of the guys from Project Horus joined us so that we could put Mesh Extenders up high and communicate with them over longer distances, which we did: 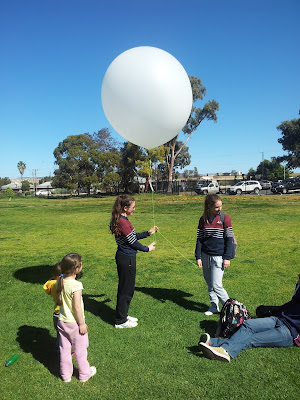 Here are a couple of the switched-on students from Port Augusta Secondary School holding the balloon that Mark and the other Project Horus setup for us.

You can also see our two kids in the foreground.  It was a very welcome change to not have to leave the family behind, but instead share some fun adventures with them.

We then moved along to Quorn and Hawker Area Schools.

Quorn has about 150 students from reception to year 12, and we spoke to all of them in two groups.  All age groups were able to interact with the technology, call each other, and enjoy the balloons organised by Project Horus.  The balloon did pop, though, as the wind picked up to gale force during the morning.

We then moved on to Hawker Area School which has just 47 students.  The wind was way too fast to do any outdoors balloon work, but we still had the students talking and texting within a few minutes in the class room.  We also explained how telephone networks function, even with the littlest kids, explaining how the centralised approach leads to single points of failure.  This was quite fun, with flying sharks making an appearance, as the photo shows: 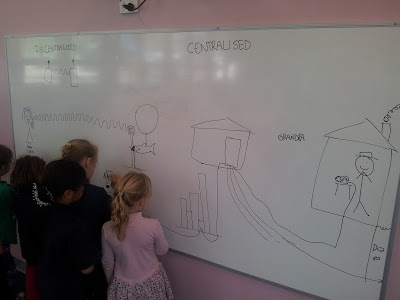 It is amazing what you can teach six year olds if they don't know that it is material from a second year University course.  We then let the kids draw in their own additions to the diagram, which in addition to the extra flying shark trying to eat the cell tower included other people using mobile and fixed phone lines.  It was particularly impressive to see that a child under the age of 8 had worked out that the fixed phone line needed to be connected to the rest of the network: 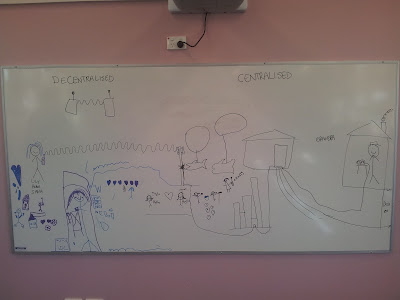 By sheer chance Victor Harbor Primary School were staying at Hawker School overnight on their Outback Camp, so we spoke to them as well.

Mark and the guys had setup an indoor balloon for them, and spoke to them about their work, and getting penguins flying close to the edge of space: 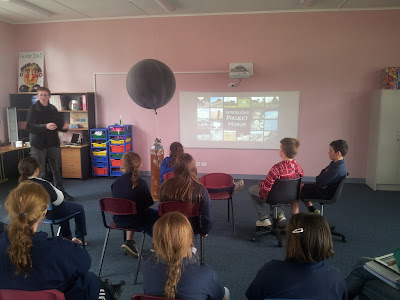 Then we all went outside into the howling gale, and released the balloon into the wind to the delight of all. It disappeared so quickly that by the time the camera got organised it was just a small black speck over the tallest tree in this shot: 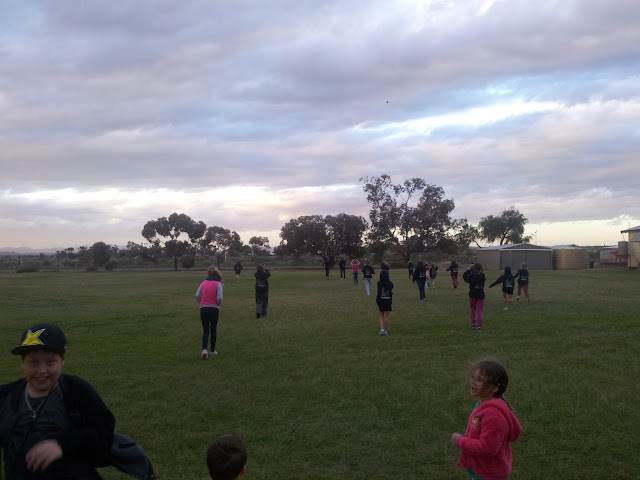 We rounded out the trip with our final event on the Pichi-Richi Steam Train on the Saturday.  Our idea was to talk to anyone on the train who was willing to listen, and to allow people to talk from end to end on the train.  Problems with the Mesh Extenders meant that we only had end-to-end communications when the train was going around corners, which fortunately is most of the time on the Pichi Richi Pass. 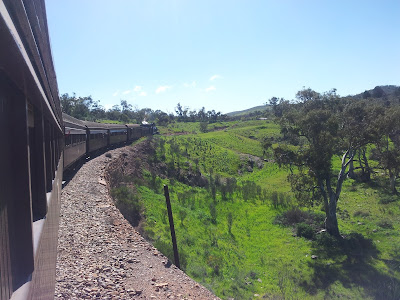 There is very little cellular coverage in the pass, allowing us to capture images like the following showing services available on a mesh-enabled phone where an ordinary phone would have none: 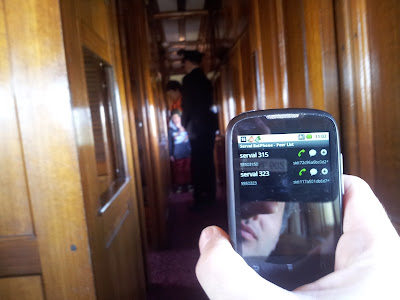 What was particularly nice on the train was one of the students at Quorn Area School was also a car captain on the train, and not only remembered what we had said the previous day, but showed further interest in what we were doing.  So all in all, I'd call the events a success.
Posted by Paul Gardner-Stephen at 4:35 AM No comments:

Latest iteration of the Mesh Extender

We finally got our hands on some nano-USB memory sticks, and have adjusted the radio placement in the MR3020 routers we are using, so that the lid can go back on without duct-tape, and the whole unit looks much sleeker.

Also, we have some smaller and surprisingly complementary styled rechargeable battery units for them, that even have a percentage charge remaining indication.  All for $17.50 on ebay!

The result is as shown in the following photos. 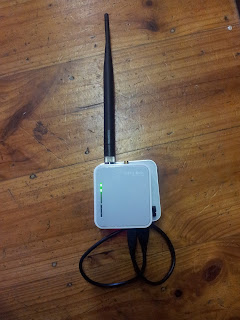 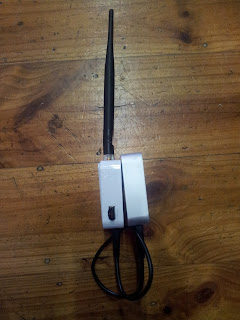 The battery packs even have a 2-digit LED display to tell you how much battery capacity you have left -- very handy for in the field. 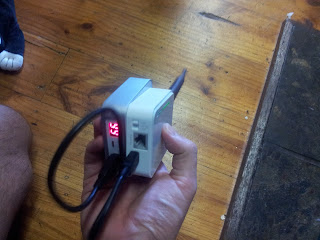 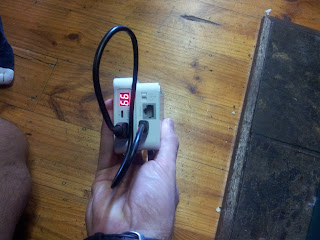 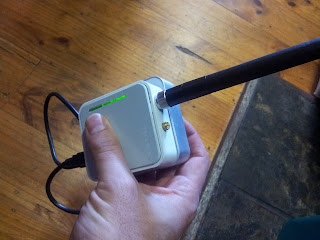 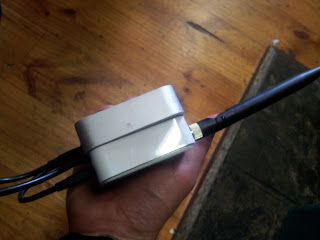 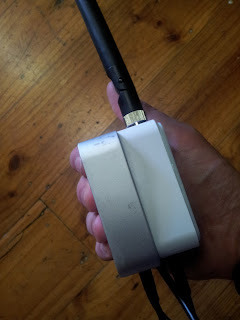 The ability to directly wire the RFD900 into these units simplifies the wiring amazingly, and really is one of the big enablers for being able to assemble the prototypes at an affordable cost: 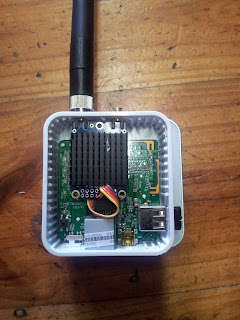 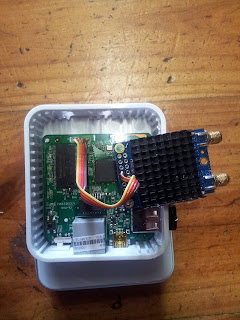 The biggest outstanding challenge is finding a nano USB memory stick that is both reliable and works sensibly with OpenWRT.  Verbatim ones don't seem to work with OpenWRT properly, while SanDisk ones might still have the "go read-only and die" bug that others have reported.  Time will tell...
Posted by Paul Gardner-Stephen at 8:20 PM 3 comments: