It's a been a while since the last post, in part due to summer holidays here in Australia, and in part due to various other things taking my time and energy.  But, we are now ramping back up for 2018.  There are a few interesting things going on that are worth commenting on:

A group has formed to port Serval to Ubuntu Touch, in their own words:

"The Serval Mesh for UBports group is dedicated to the task of launching a fully functional Serval app for Ubuntu Touch and aiding in the expansion of community-built mesh networks."

"Hi! We are busy making Serval Mesh work on UT and it's going WELL (they say)"

In just a couple of days, they already have servald running on the phone (this is one of the nice things about Ubuntu Touch basically being a port of Ubuntu Linux, and thus brings with it many benefits of convergence, i.e., where something made for one platform works on the other, possibly without any changes.  Here are some early screenshots showing their current progress (which, given they have been working on it for only two days, is very nice): 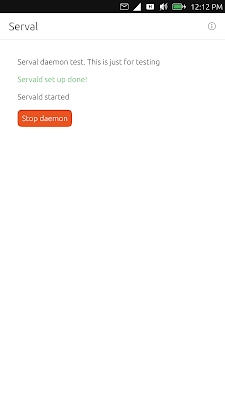 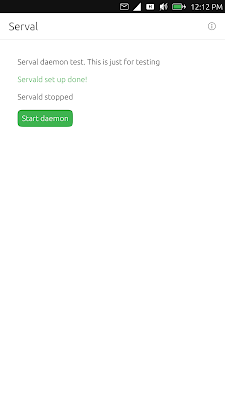 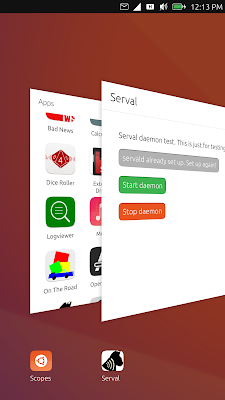 In that last one, you can also just see the cat's ears poking up in the bottom of the list of apps, as well :)

Currently the list of devices that support Ubuntu Touch is relatively limited. That said, my FairPhone 2 is on the supported list, but I am not sure if I will switch over just yet.  I might just get a second FP2 for testing for now.  The FP2 is of course the perfect phone for Ubuntu Touch in my view, as it is an open-hardware phone as far as is possible, and allows for end-user servicing -- very much in line with the Linux ethos.

This is a project supported by the Humanitarian Innovation Fund (HIF) out of the UK.  While we have a couple of roadblocks to solve, as a result of Outernet moving back from L-band (~1.5GHz) to Ku-Band (~12GHz), the end result will be VERY exciting, in part because the bandwidth will be higher, and in part because it looks like we will be able to incorporate the entire receiver into the existing Mesh Extender cases, thus offering a single unit that does both functions.  The new Ku receiver antennae are also nicely shaped to allow for strapping to a tree pointing in the general direction of the satellite.

More to come on this as it progresses.

3. We have our next cohort of excellent students from INSA Lyon, France, arriving as I type.  They will be working on a number of very useful sub-projects, including bedding down the HF radio support we first demonstrated a couple of years ago, fixing bugs we identified in Vanuatu last year and so on.  I am VERY excited about seeing progress on these fronts, so that Serval Mesh Extenders can be usefully deployed by our various partners in a variety of ways.