Some interest in the open-source collapsible communications tower

It was nice to hear of some further interest in the open-source collapsible communications tower concept that we have worked on over the past year or two:

The project is ongoing, with a student looking at the existing design to better characterise it for operational use.
Posted by Paul Gardner-Stephen at 10:44 PM No comments:

Serval Mesh 0.92 is out on Google Play

After quite a delay, we have finally released a new version of the Serval Mesh.

This is still an experimental release, but it does contain a number of important improvements, including but not limited to:

For a full list of what's changed since 0.91, the release notes for this version are available here;
https://github.com/servalproject/batphone/blob/master/CURRENT-RELEASE.md


If you want to install the latest version without using the play store, you can download it here;
http://developer.servalproject.org/files/serval.apk

Posted by Paul Gardner-Stephen at 10:39 PM No comments:

This week I am up at Arkaroola in the Australian Outback together with Ülf, who is visiting us from Germany.  We are finishing the installation of some long-range Wi-Fi communications equipment that I began as part of National Science Week in August of this year.

The primary goal that we had planned was to connect the broadband internet service that is generously provided by MIMP to the Arkaroola homestead area, which includes the research facility in the old wool shed.

During National Science Week we explored a number of possible paths between the Arkaroola Village where the internet service lands and the homestead area.  The distance as the crow flies is about 5km, but with some serious obstructions in the form of iron-bearing hills and ridges.

These obstructions meant that we would need at least one relay station unless we could build some 20m high towers, and even then it wasn't certain that we would have clear line of sight. We had hoped to be able to put that relay station near a road to make for easy maintenance, however that proved impossible.

The next best option was to place the relay station near a walking track that goes over the Acacia Ridge which has line of sight to both the village and homestead.  The challenge is that this would require a 2km hike over rough ground to get the approximately 200m altitude over the valley floor -- a fascinating prospect when contemplating carrying equipment to construct a communications relay.

But first, here is Ülf assembling one of the the Ubiquiti NanoBeams: 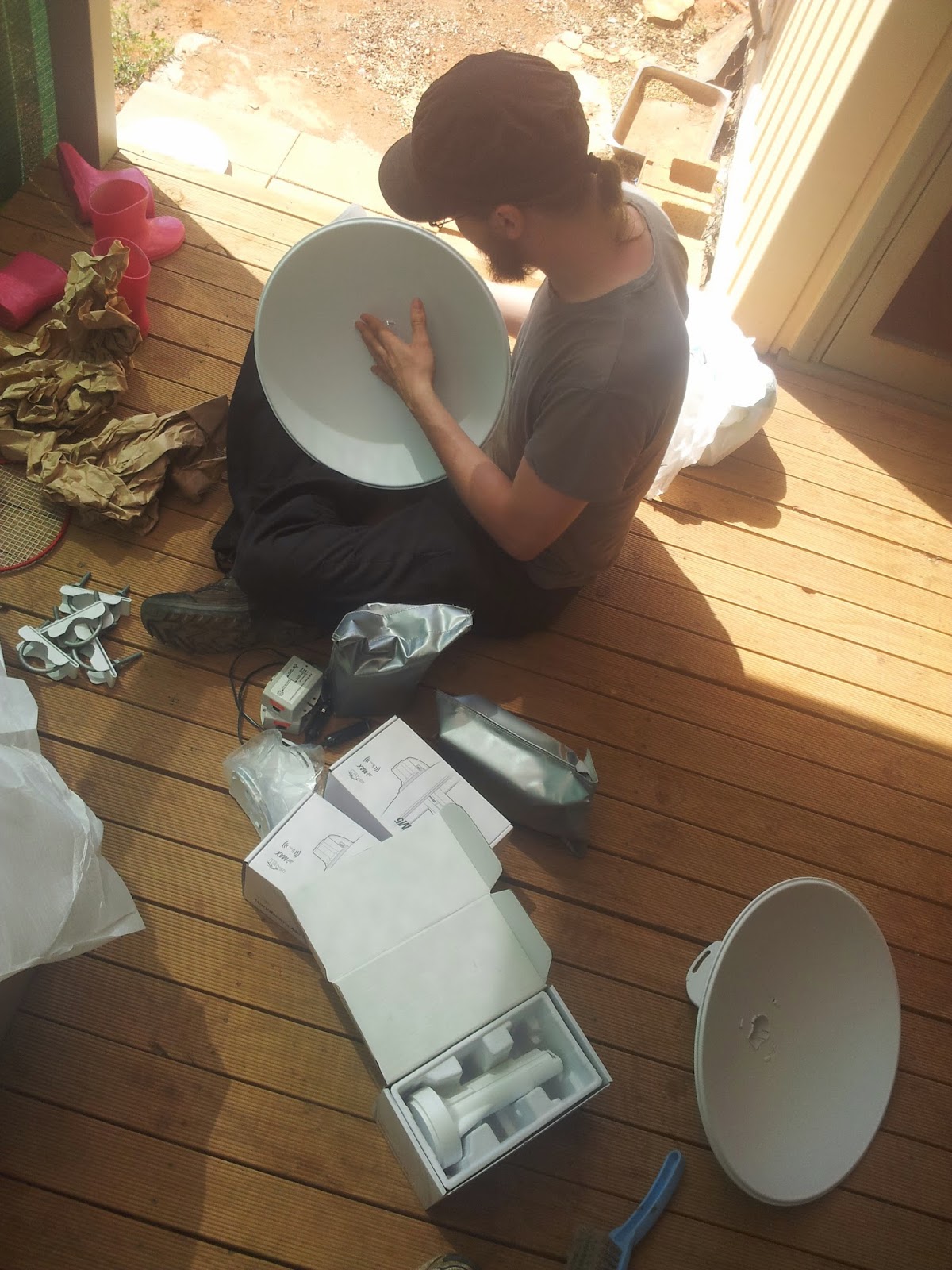 This is one of the NanoBeams temporarily located beneath another access point on the observatory.  The NanoBeam is pointed at the Acacia Ridge relay we installed. 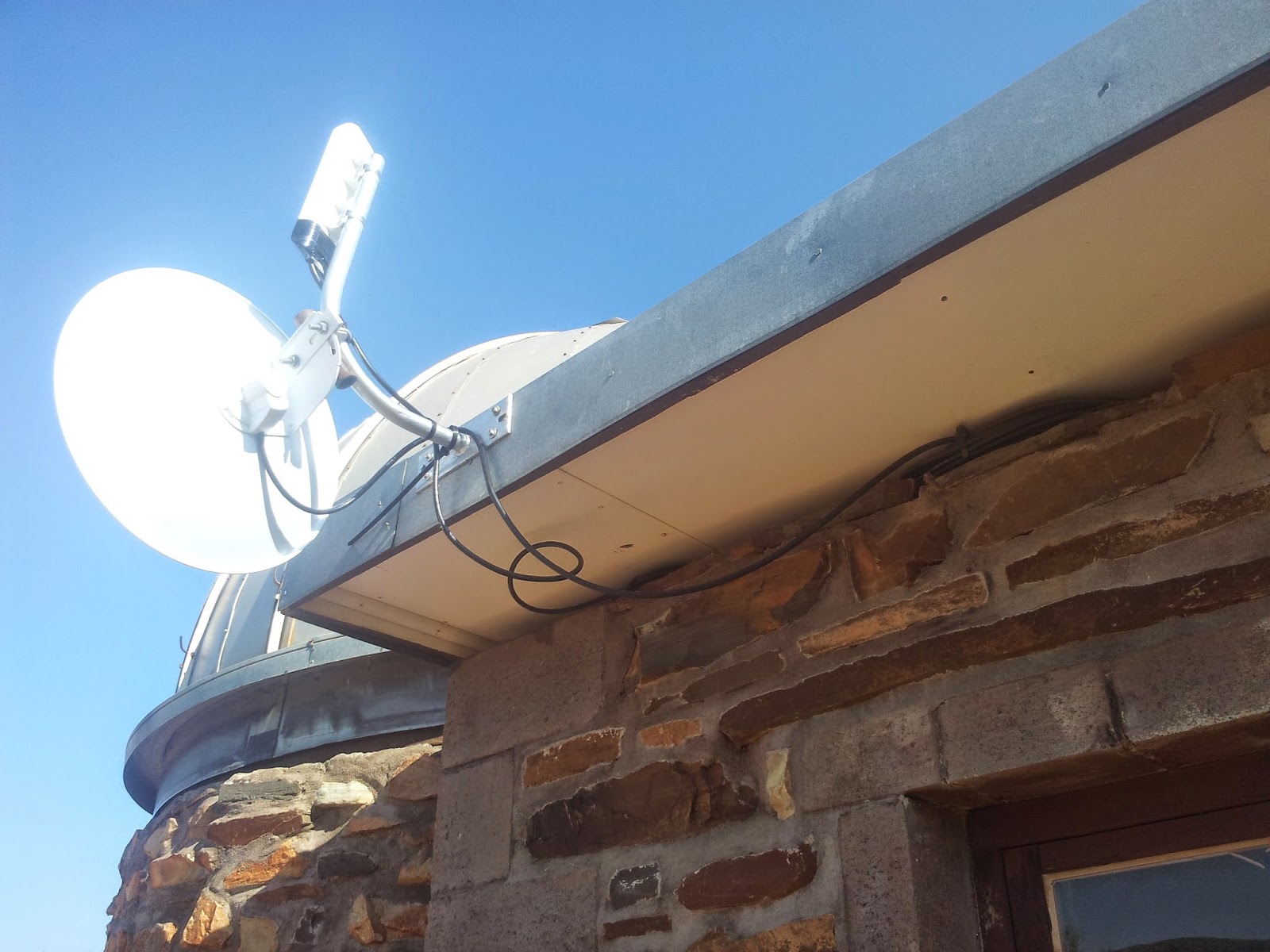 Ülf checking the configuration of the NanoBeam before it was attached to the observatory: 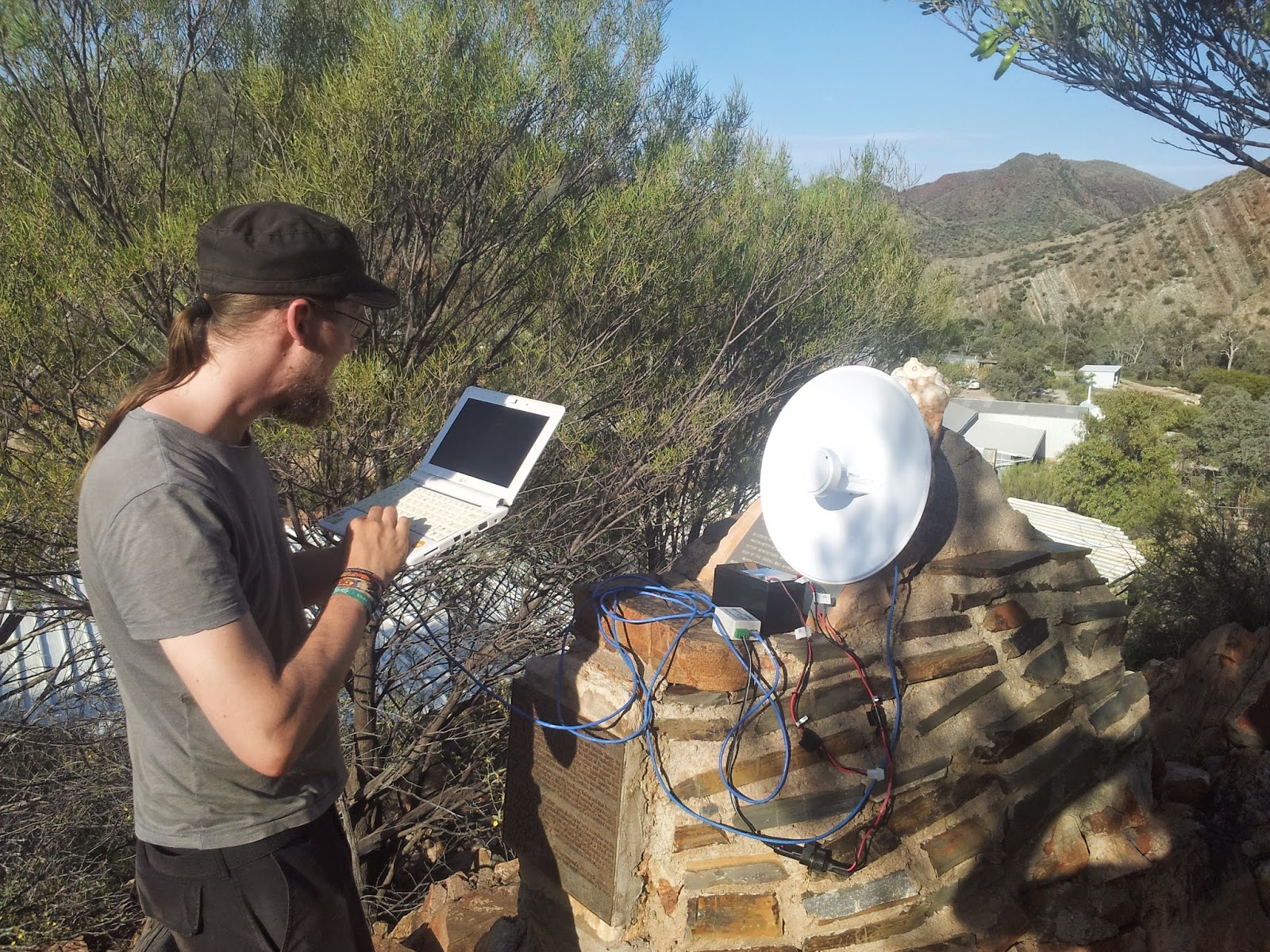 Rod fabricated a short tripod mast for the Acacia Ridge relay.  Here we are transporting it by trailer to the Acacia Ridge trail-head. Special thanks go out to the Turners who lent us their trailer, knowing that it would be covering several hundred kilometres of Outback dirt roads. 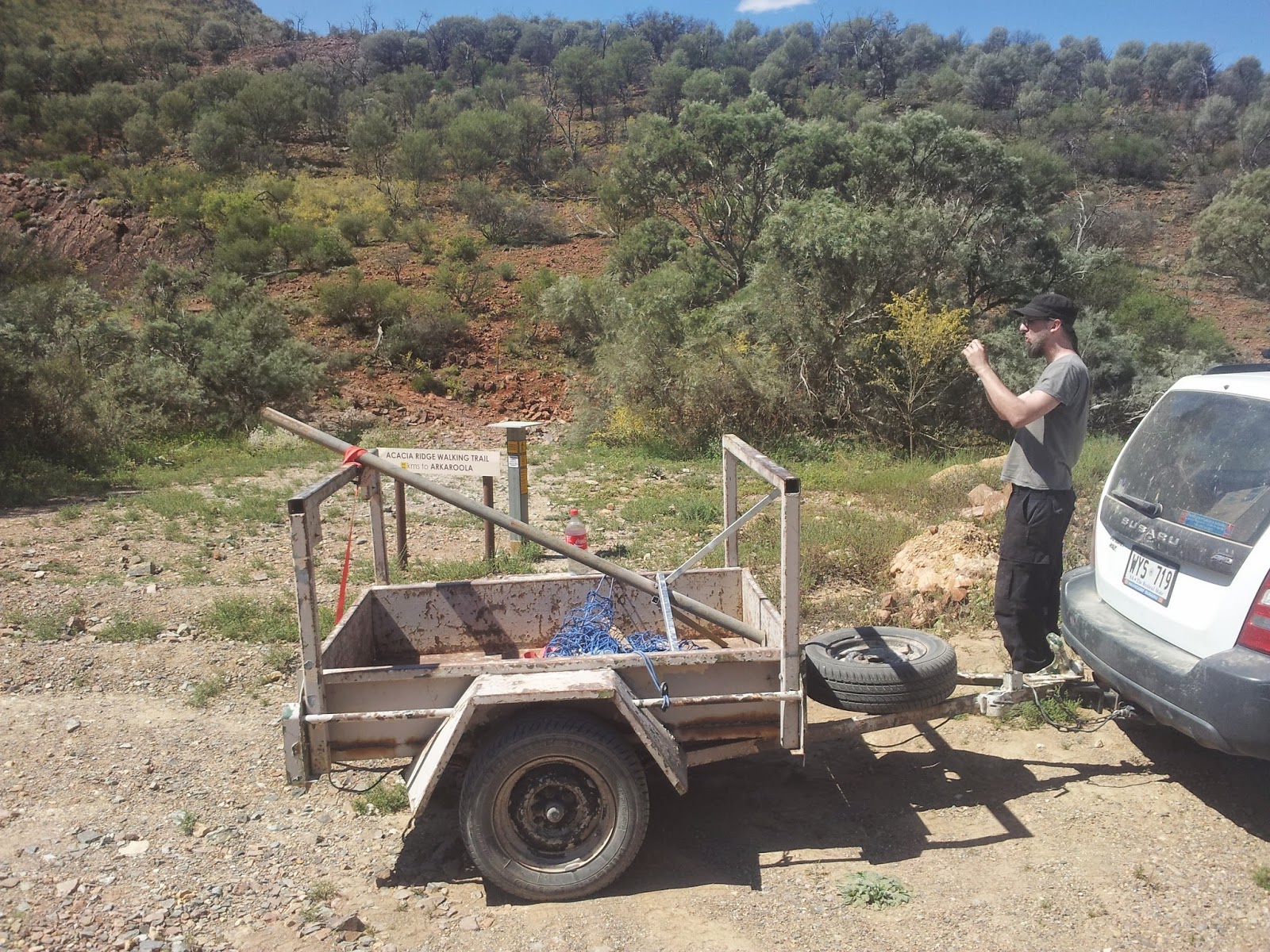 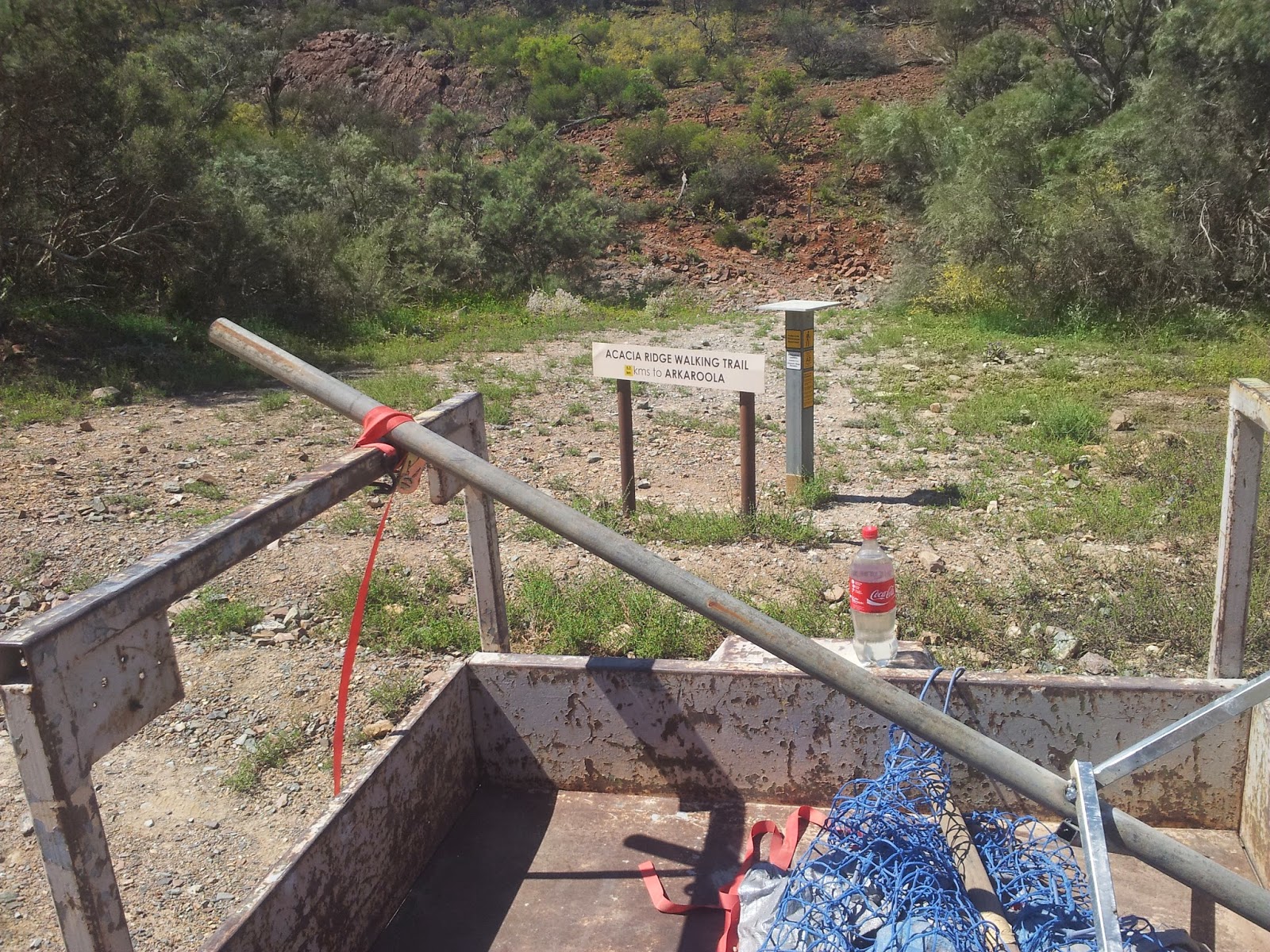 ... however, it would be interesting to carry up the trail. Ülf had the great idea to make slings to make it easier to lug up the hill.  You can also see that we temporarily attached the dishes to the mast for ease of carrying.  Note that this shot was taken a rare flat and open section of the trail.  The trail averages about 7% grade and is very narrow with large rocks most of the way. 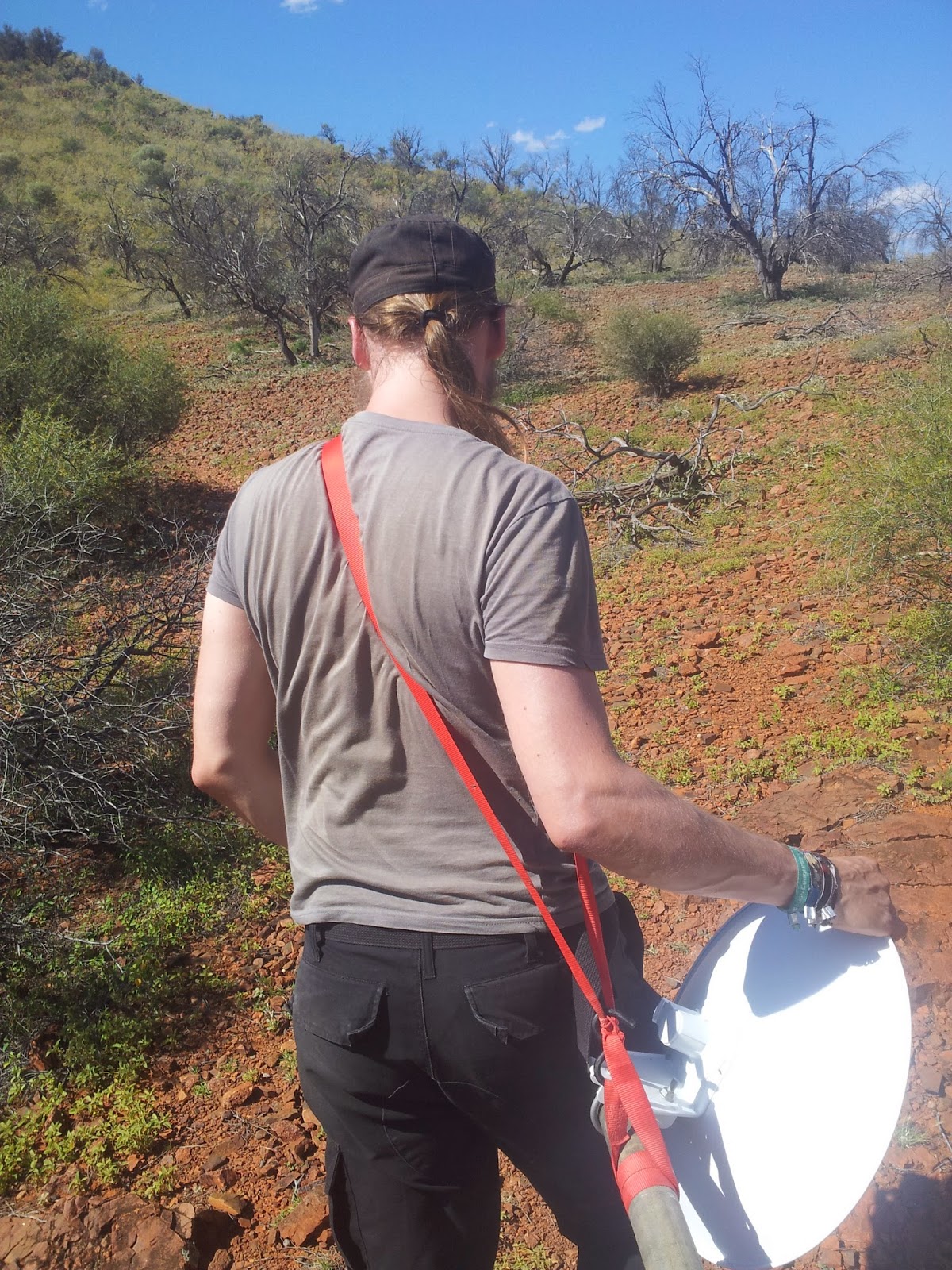 Most of the way up we stopped to take a shot of the view.  We started out from near to where the road disappears behind the rise in the foreground to the left.  The homestead buildings can be seen amongst the trees in the creek line a little further away. 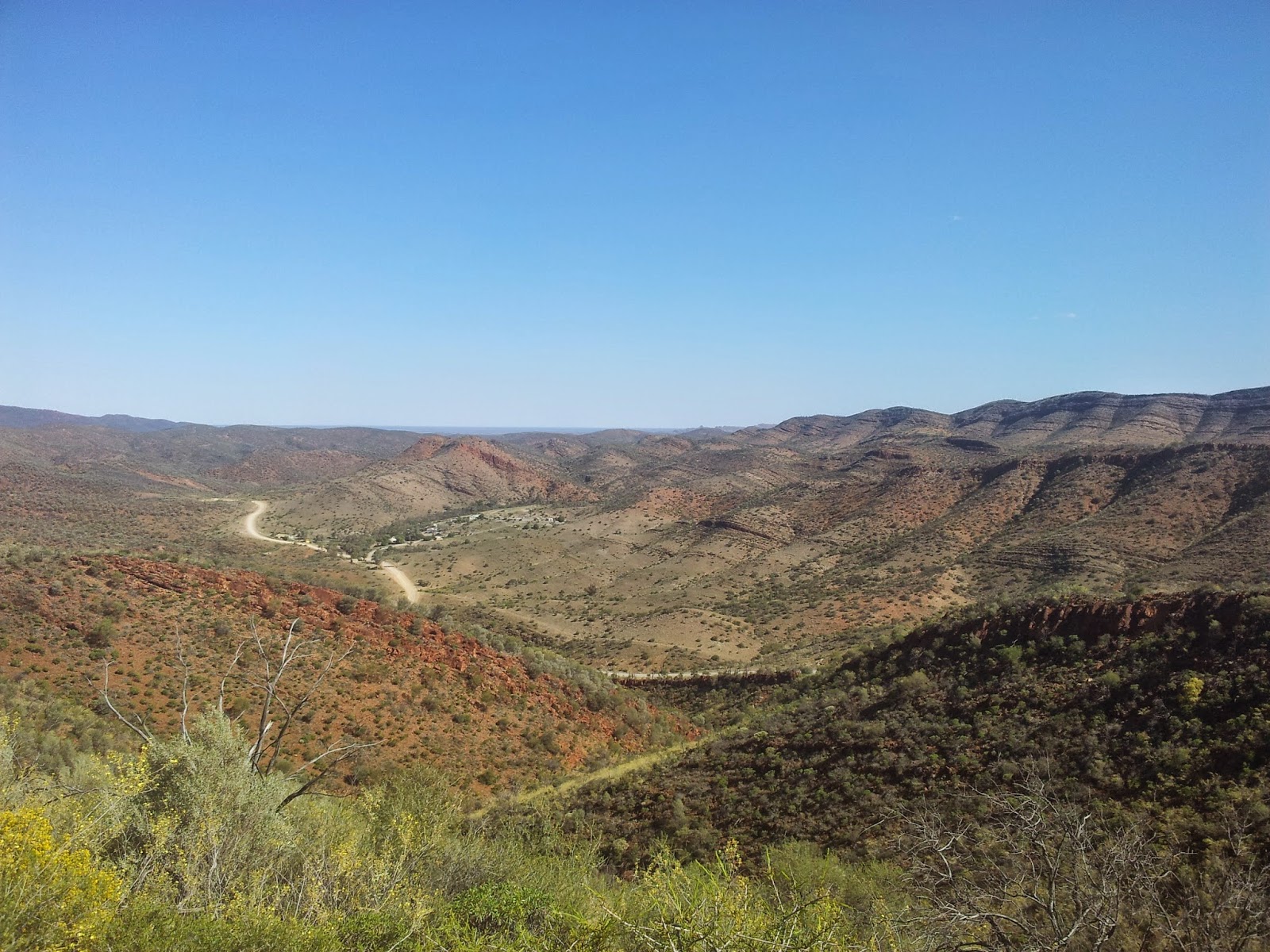 Oh, yes, we also had to carry a pick-axe with us to dig the mast in.  All up I think we had about 30kg of gear with us.  We were quite warm by the time we reached the site, with the weather around 33 degrees C. 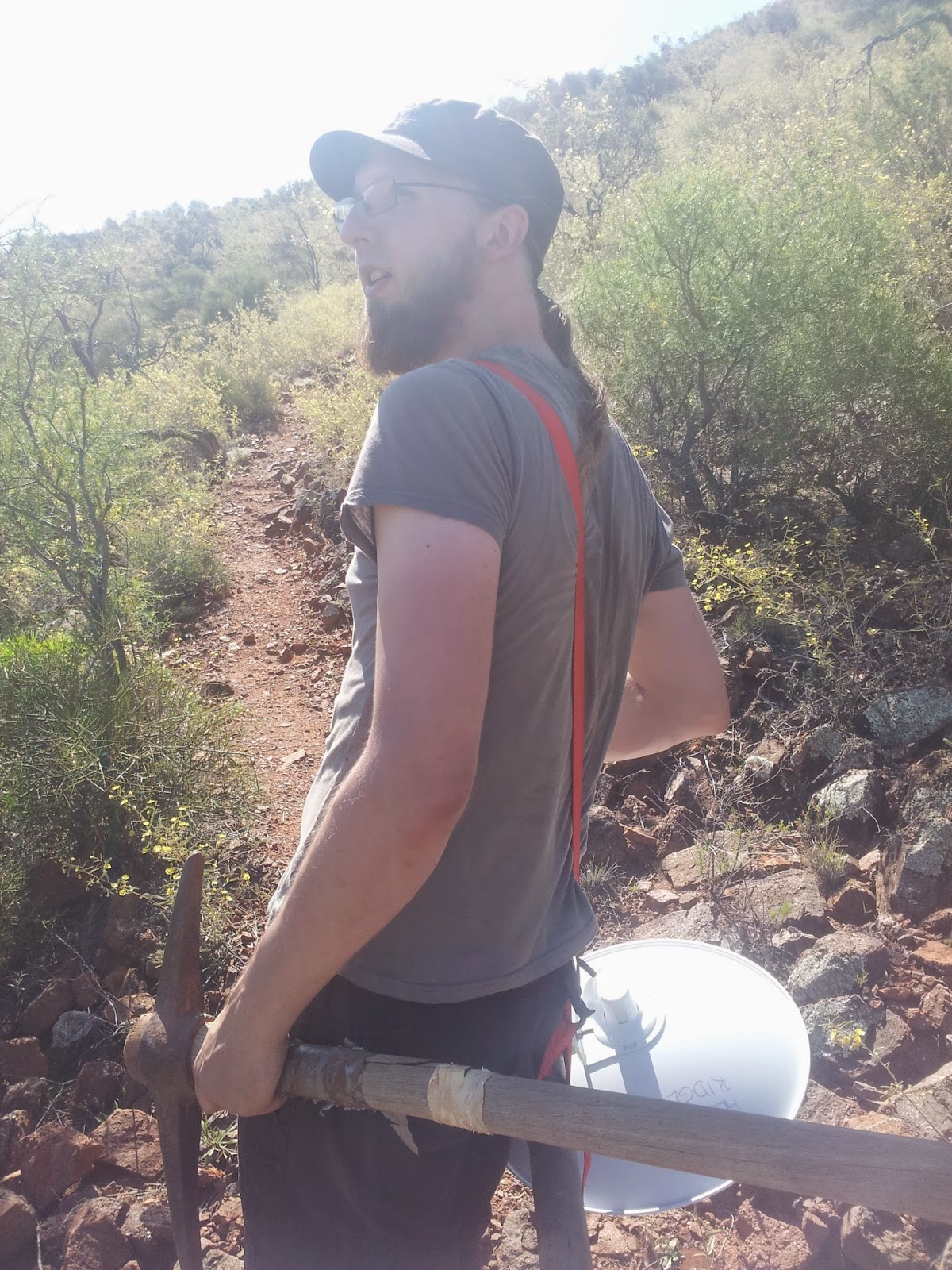 Another brief stop to enjoy the view: 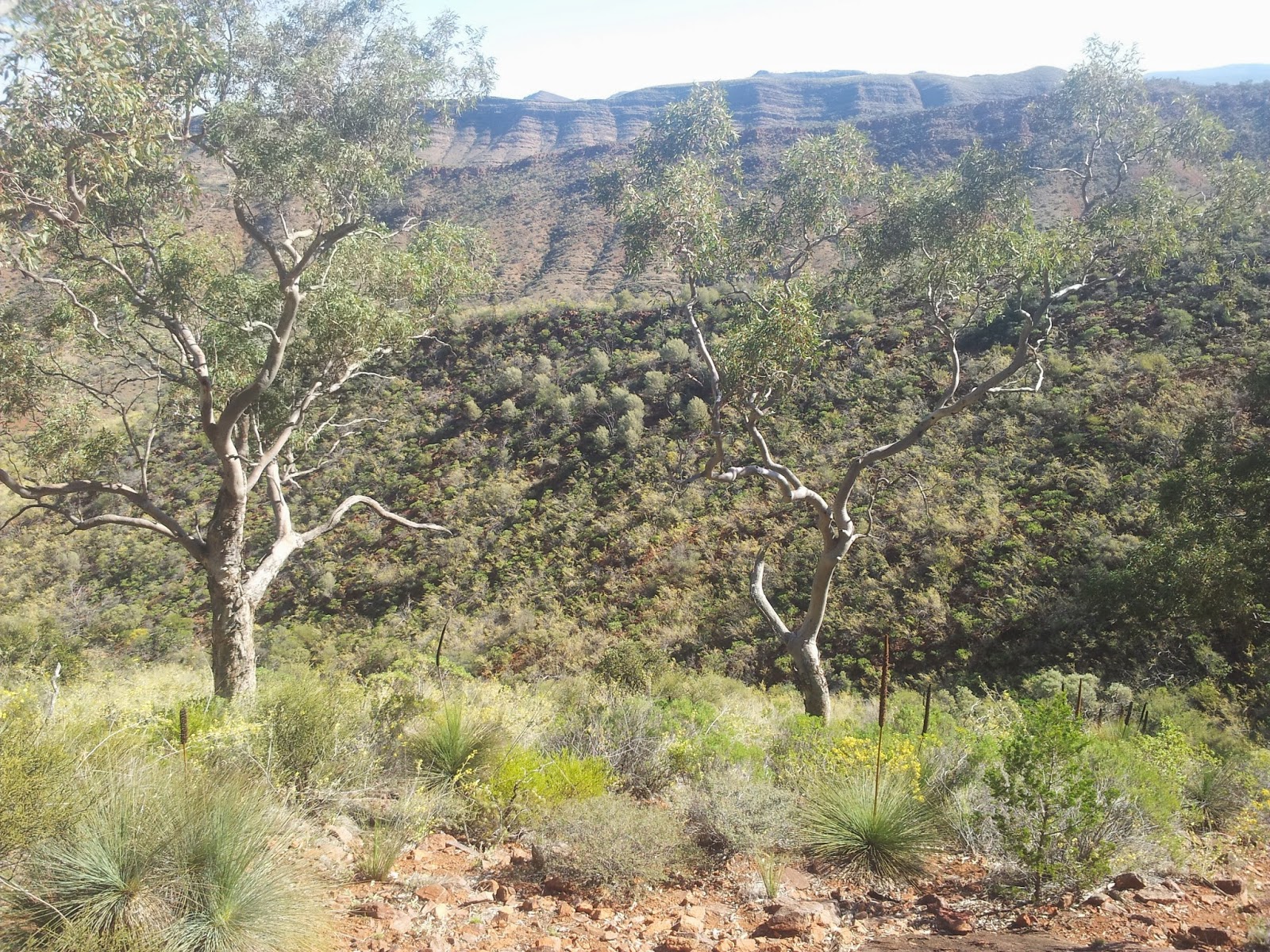 Finally we reached a point where we could see the village in the distance, and which had some soil amongst the rocks allowing us to site the mast. 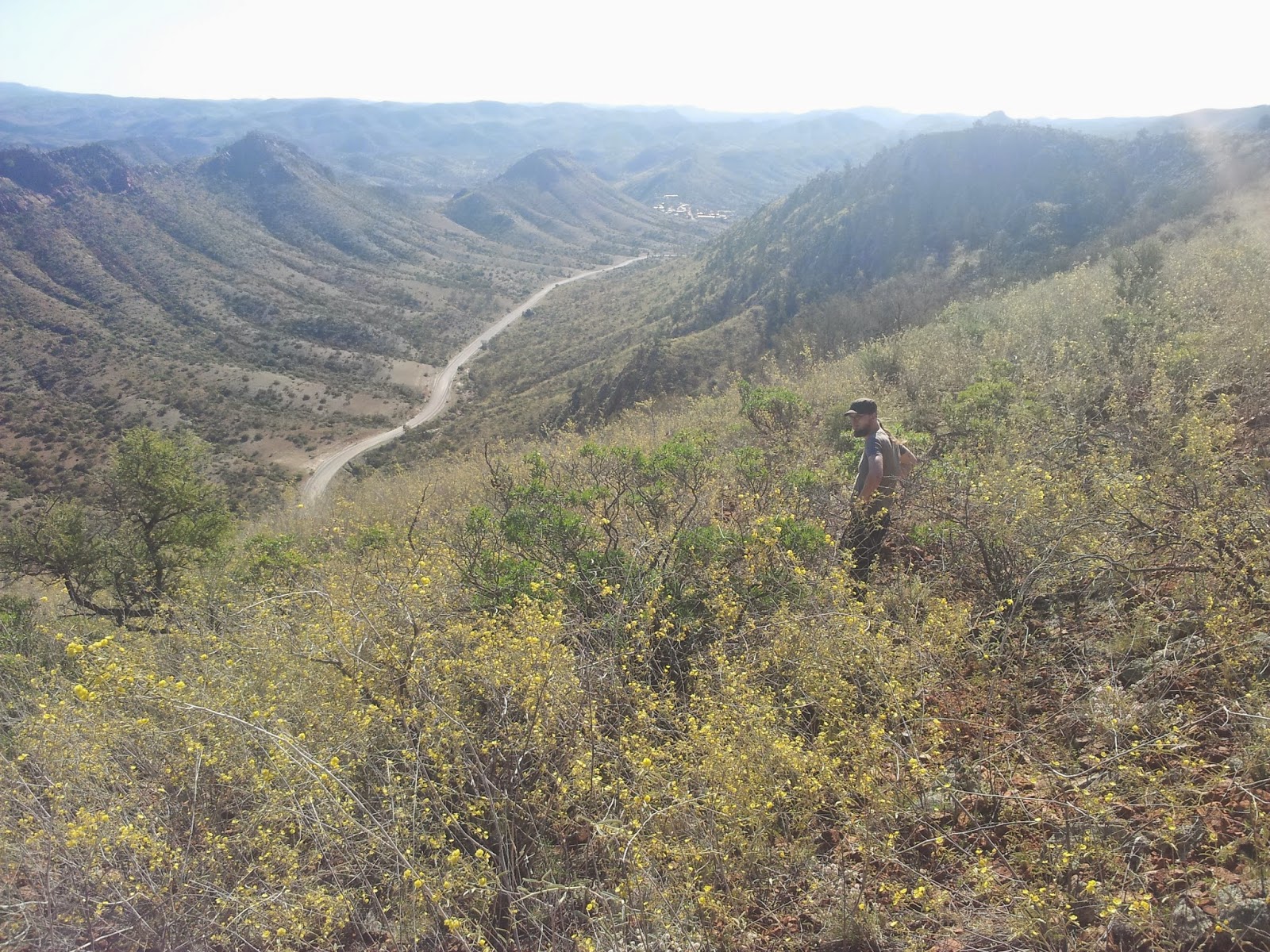 It is very pretty up there at the moment with all the flowers after a couple of good rains in the last few weeks.  Arkaroola and the surrounding country has a rather strange weather pattern, in that not only is the annual rainfall essentially random, but this randomness persists even for decade-by-decade averages.  So while some years and decades may average <100mm per year, it possible to get 300mm in a day.  In short, the rainfall is chaotic, in the mathematic sense. 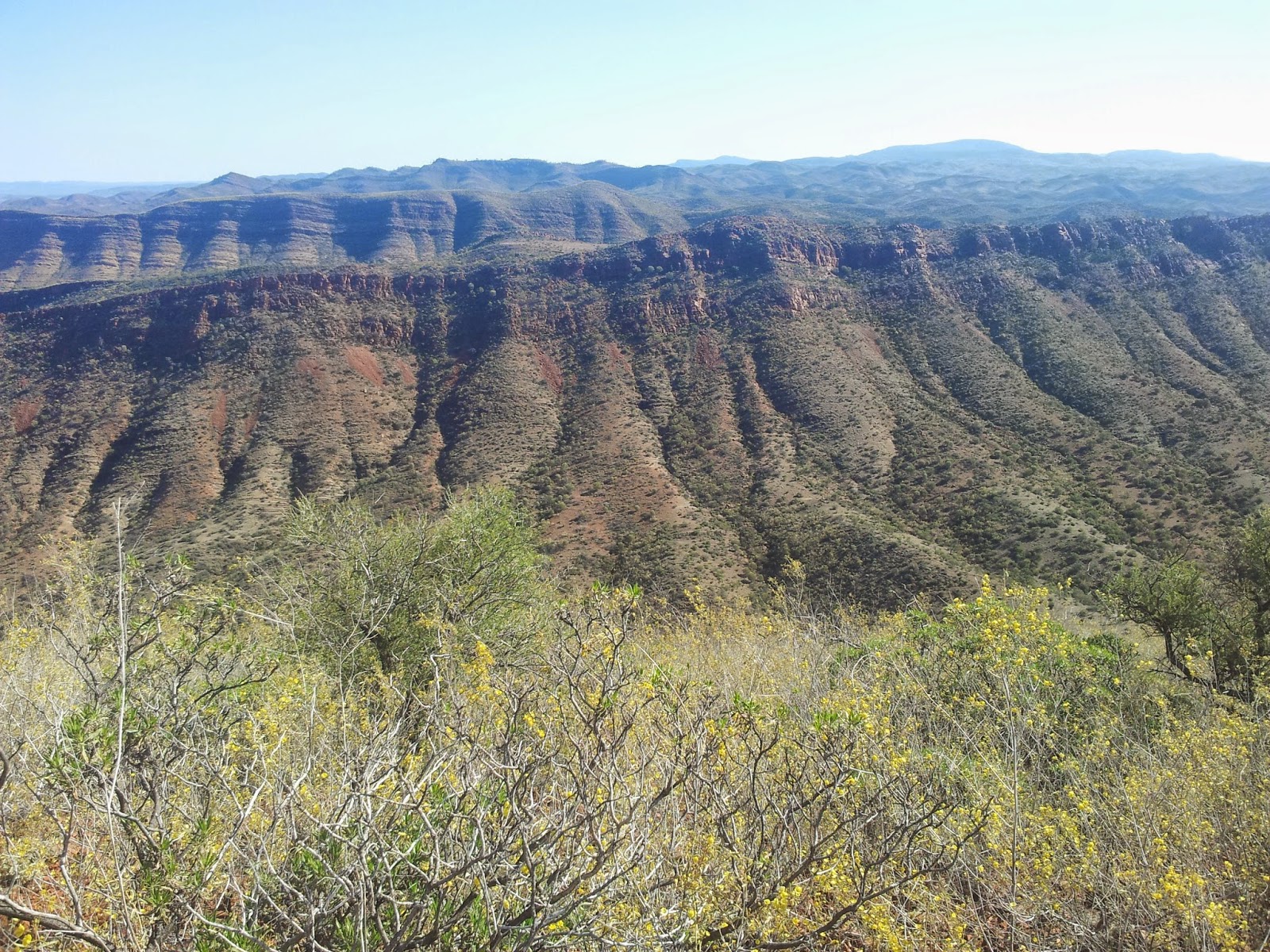 These beautiful views of distant peaks got Ülf and I thinking about just how far we could reach from this site with a few more NanoBeams. 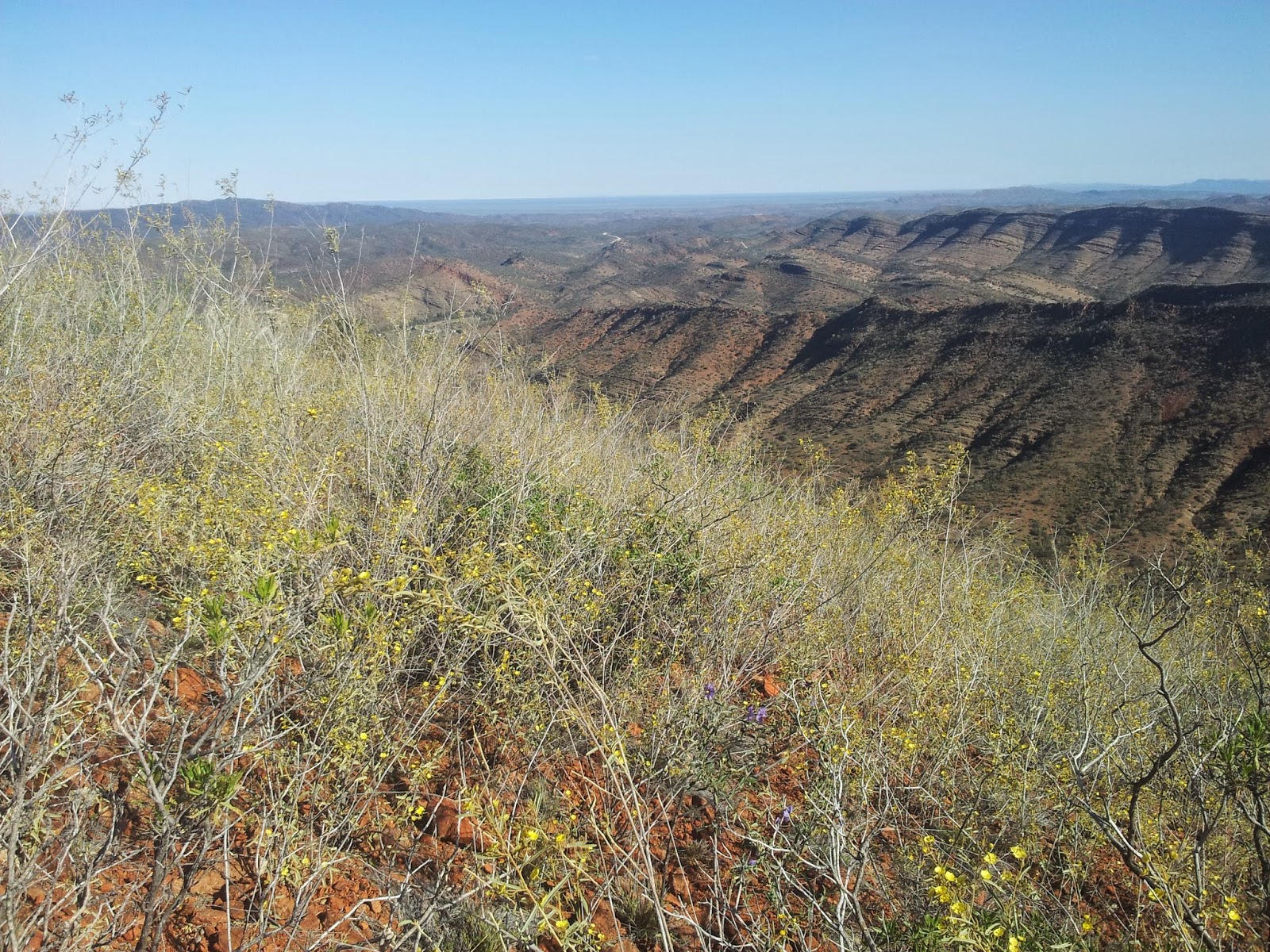 Finally, unpacking our load, and starting to install the mast: 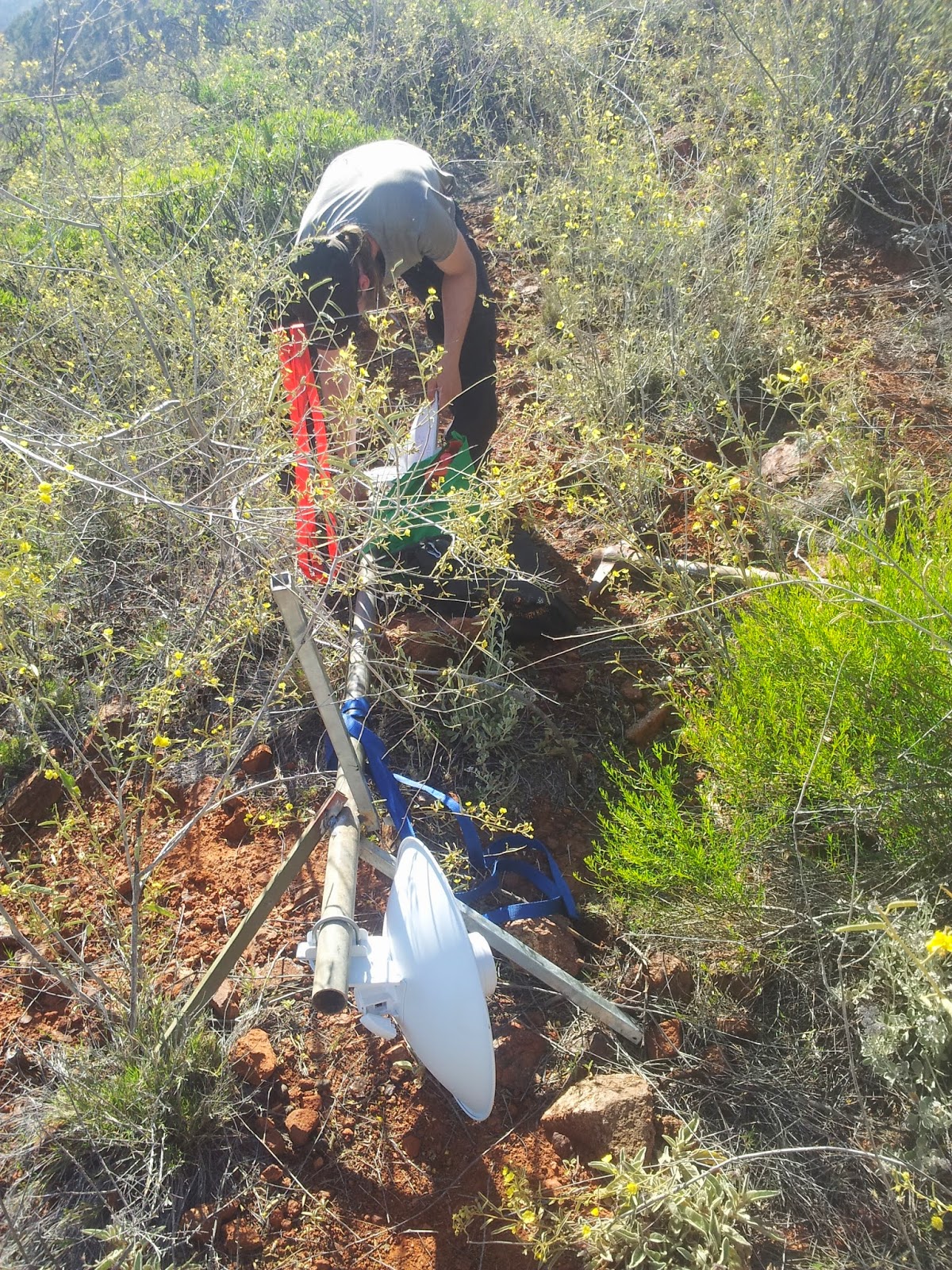 There is not too much soil here, so we just dug the mast in as best we could ... 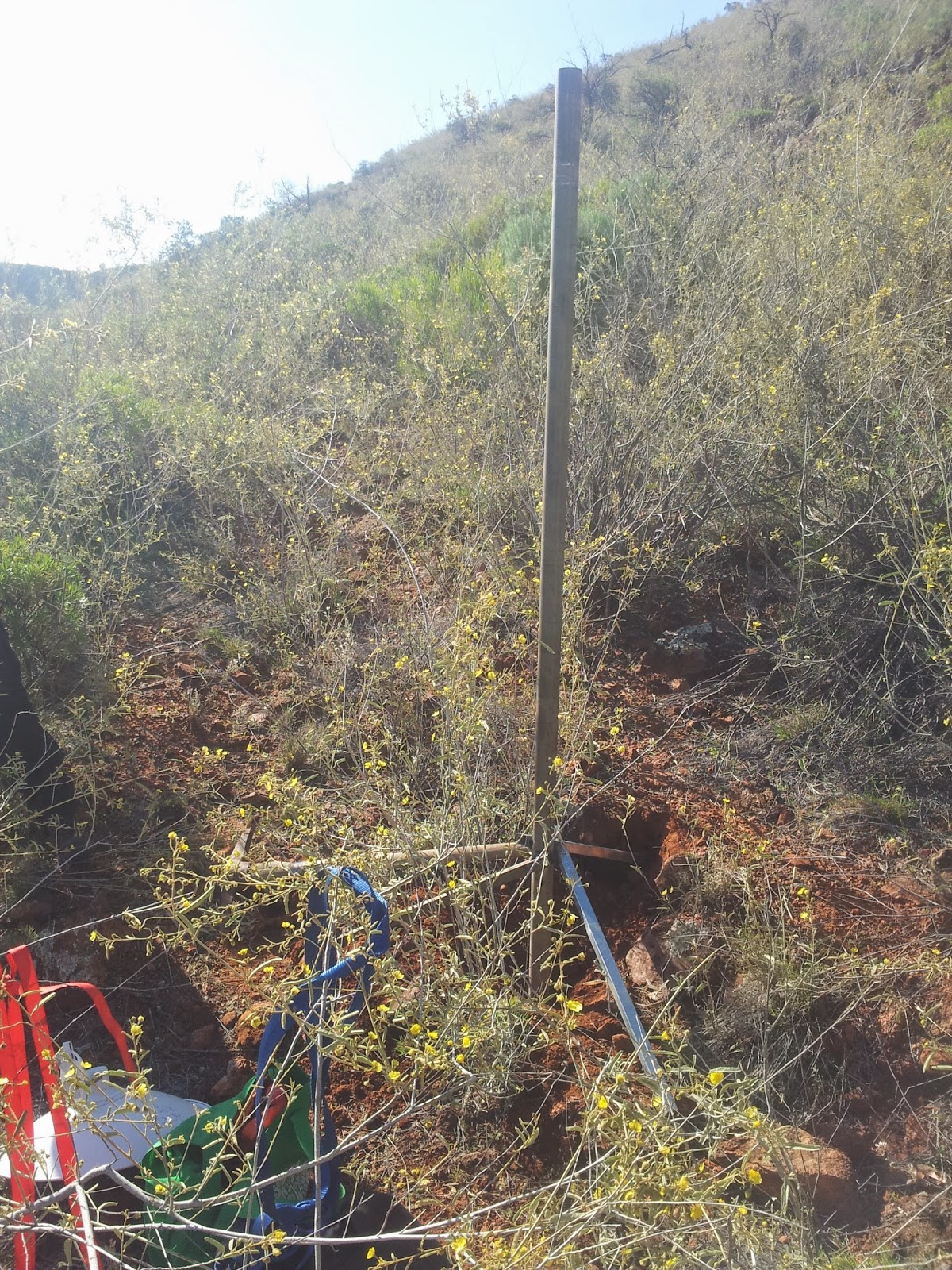 ... and then piled lots of rocks on the legs of the tripod before installing the dishes.  It wasn't possible to carry the solar panel on this load, but we plugged the batteries in anyway, so that we could monitor the link from the village before heading back up with the 80W solar panel. 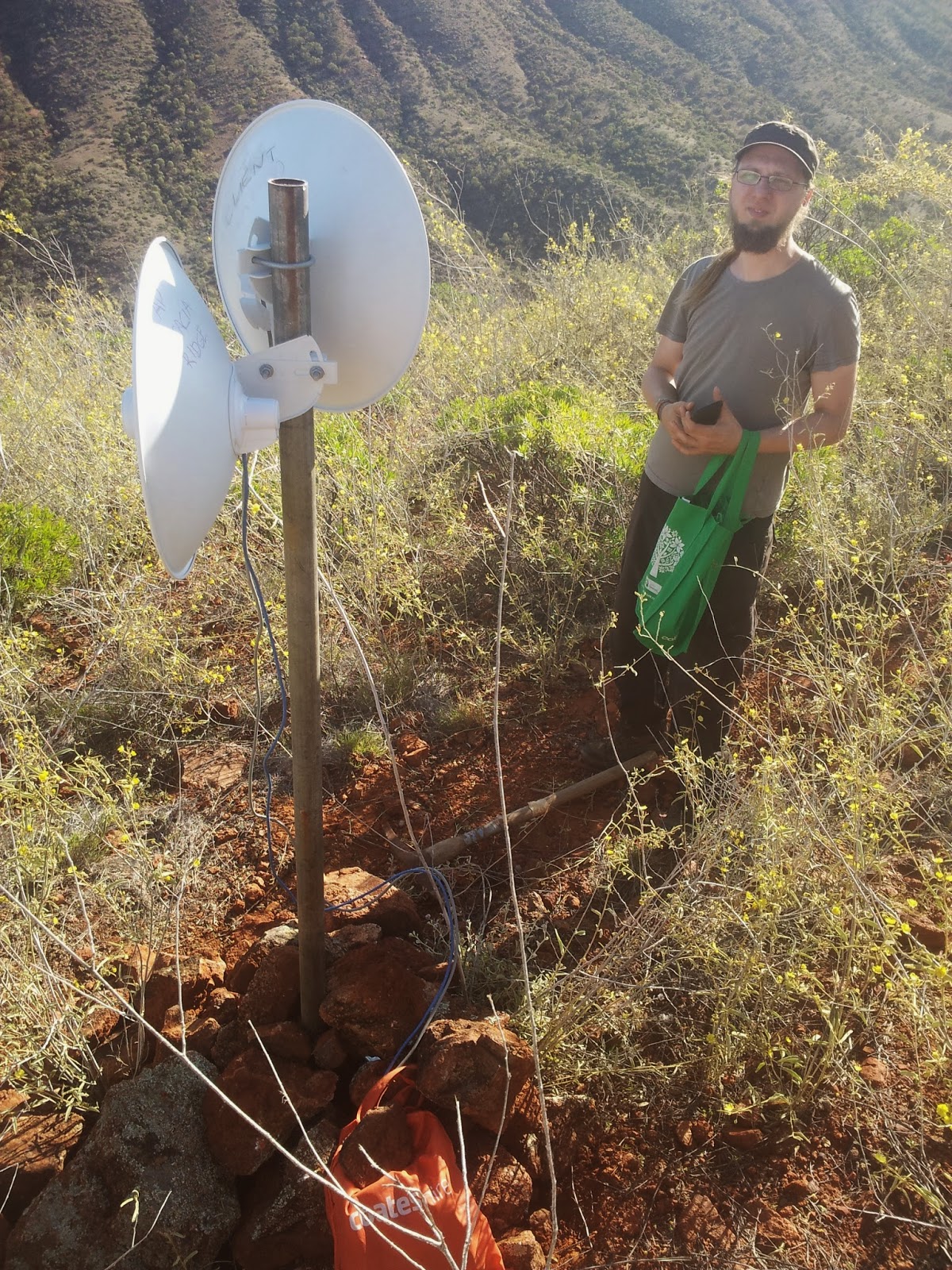 A few quick views over the dishes to verify that general alignment was fine. The relatively short distances (<3km for each link), meant that we didn't have to be too worried about super-accurate aiming. 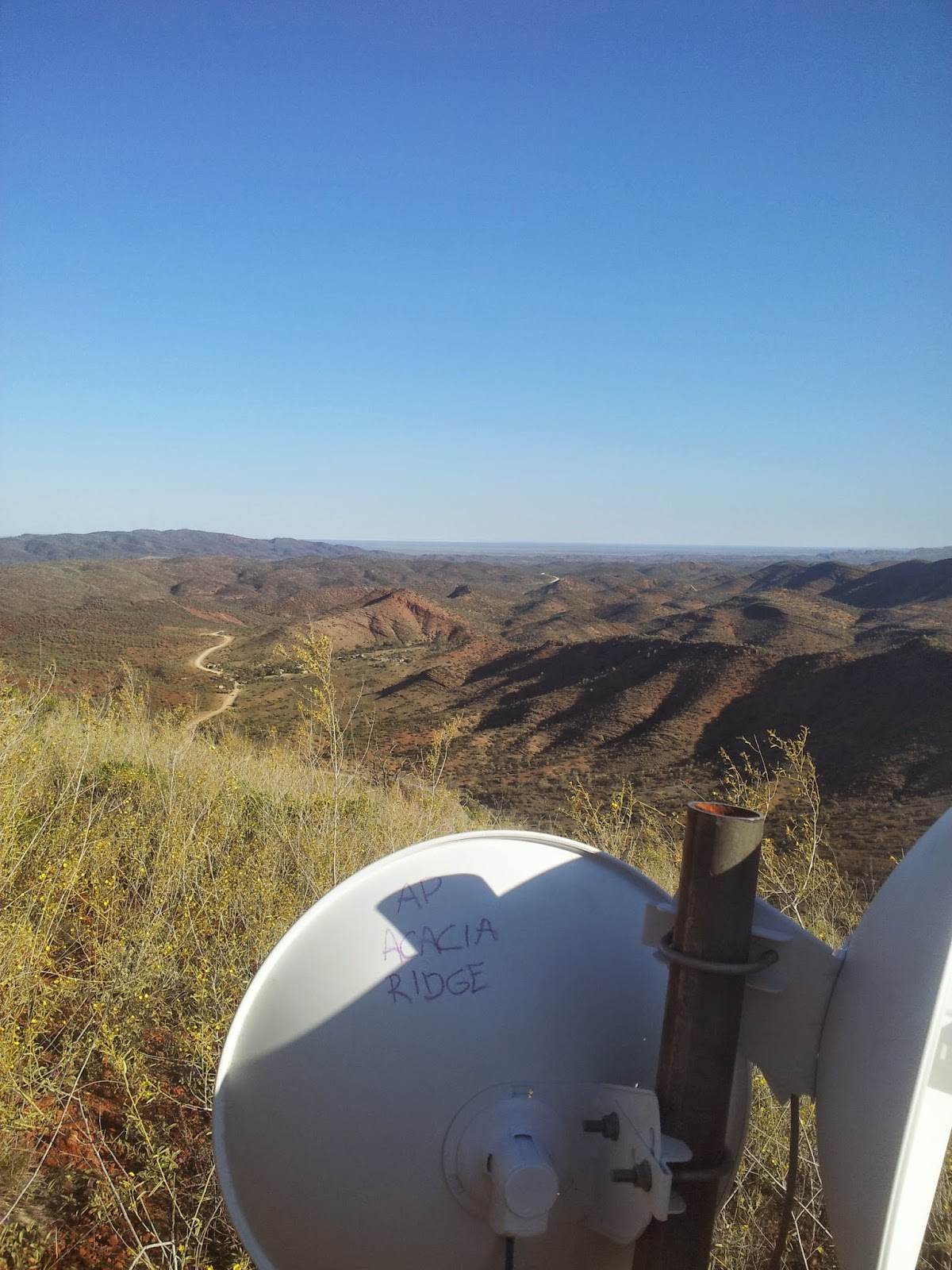 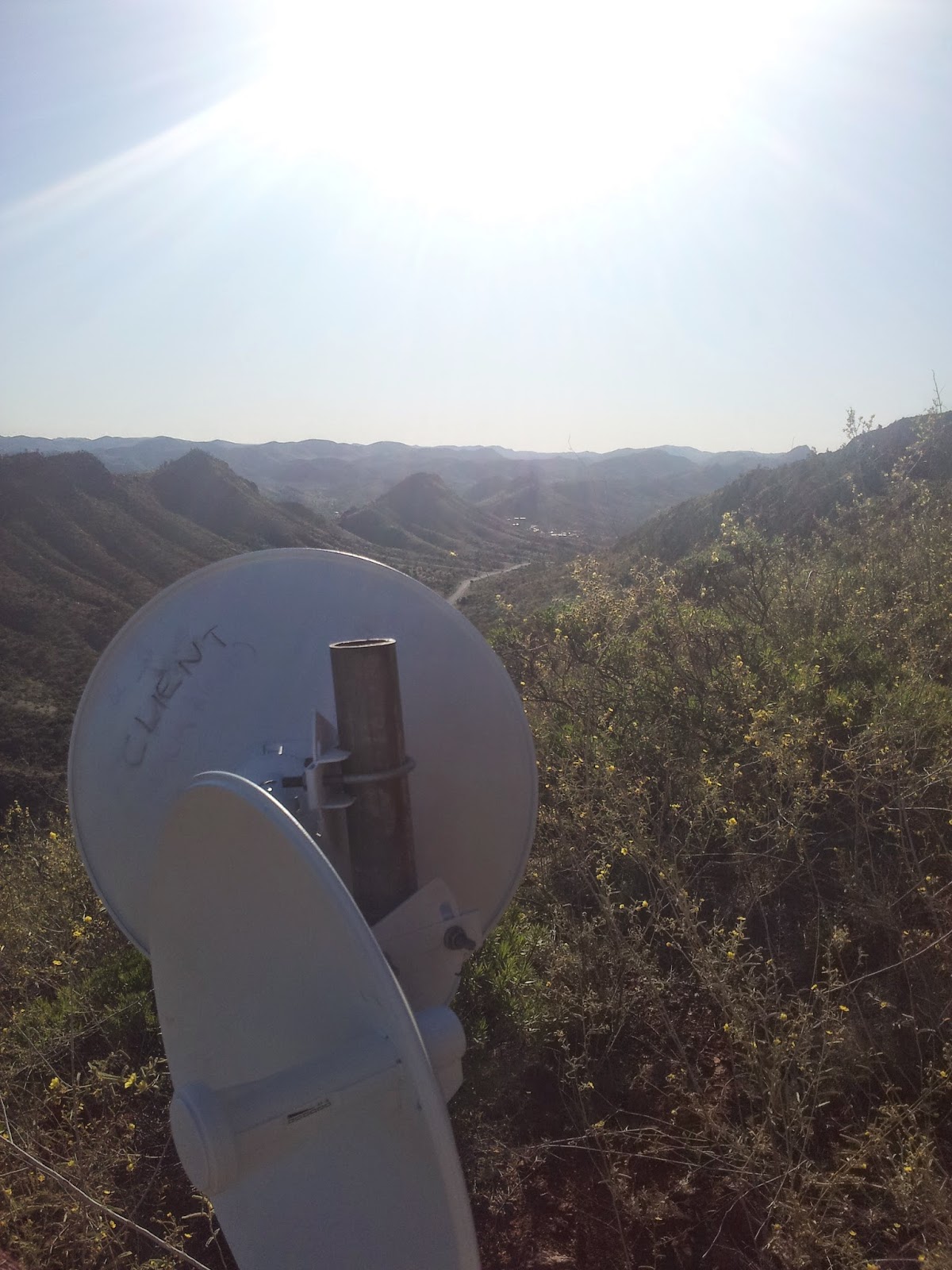 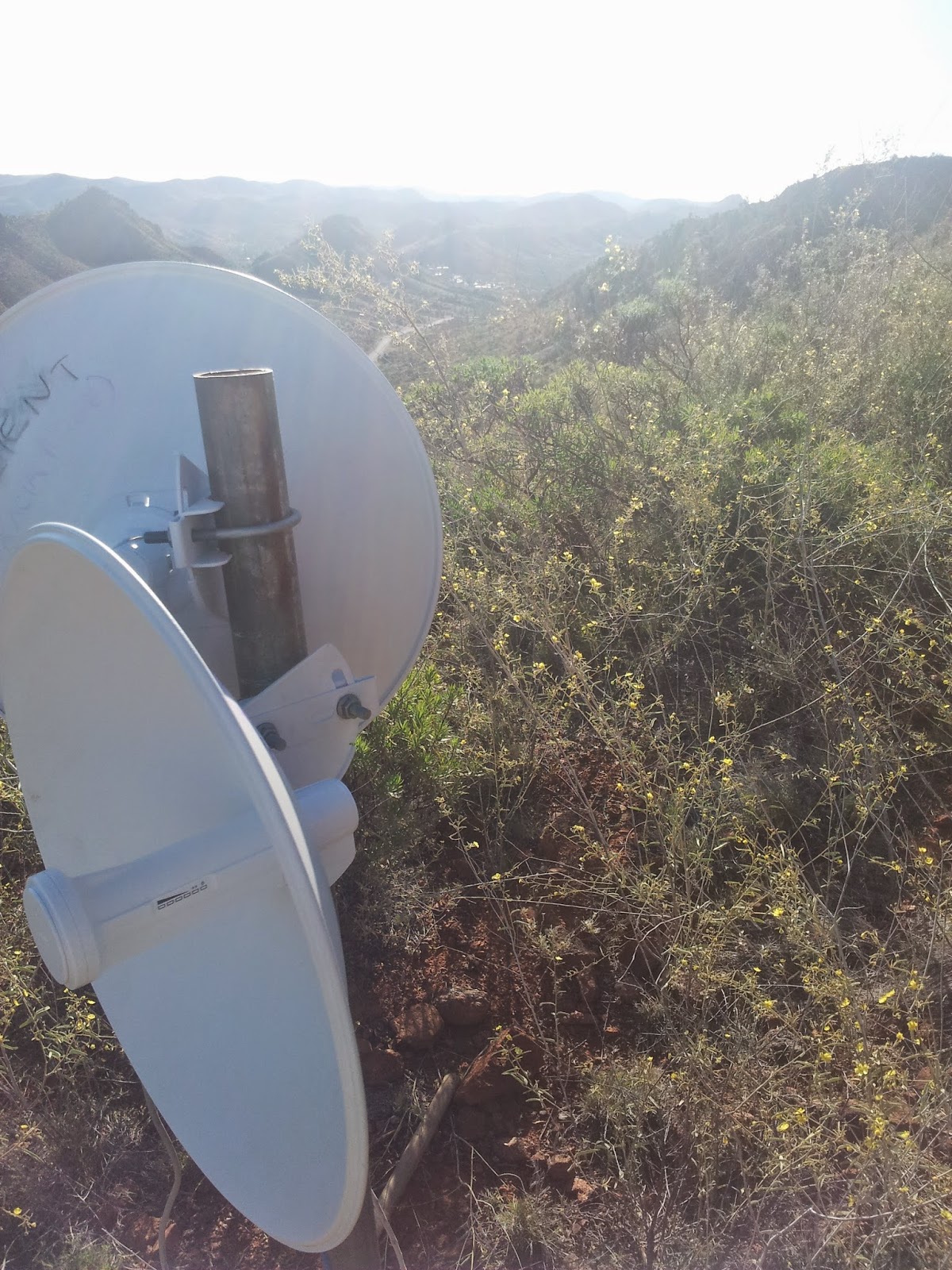 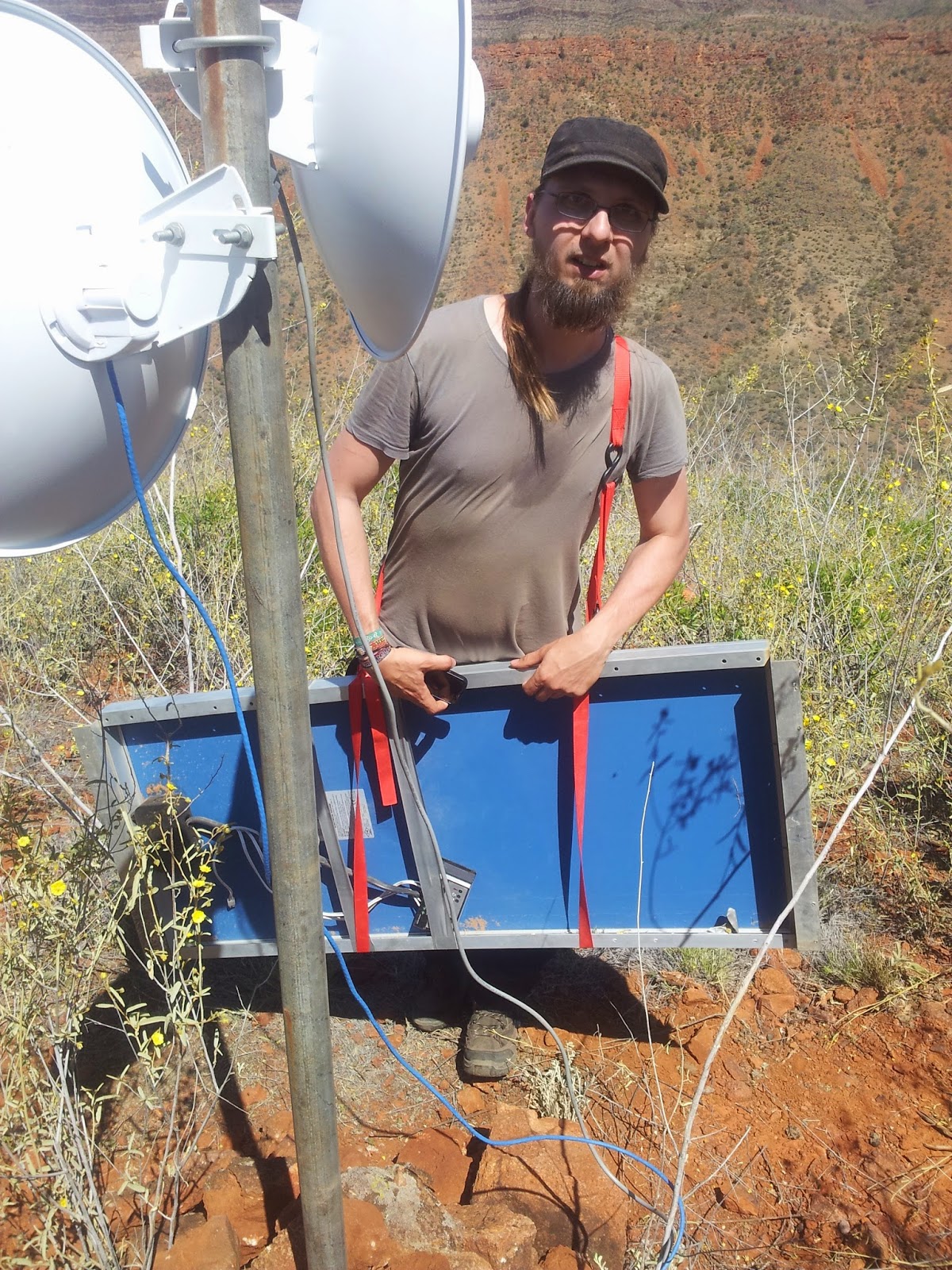 It was now 44 hours since the NanoBeams were plugged into their separate 120Wh LiFePO4 battery packs.  One battery was too flat to run the NanoBeam, but the other was still going strong.  You can see the voltage difference empirically in the differential brightness of the LEDs. 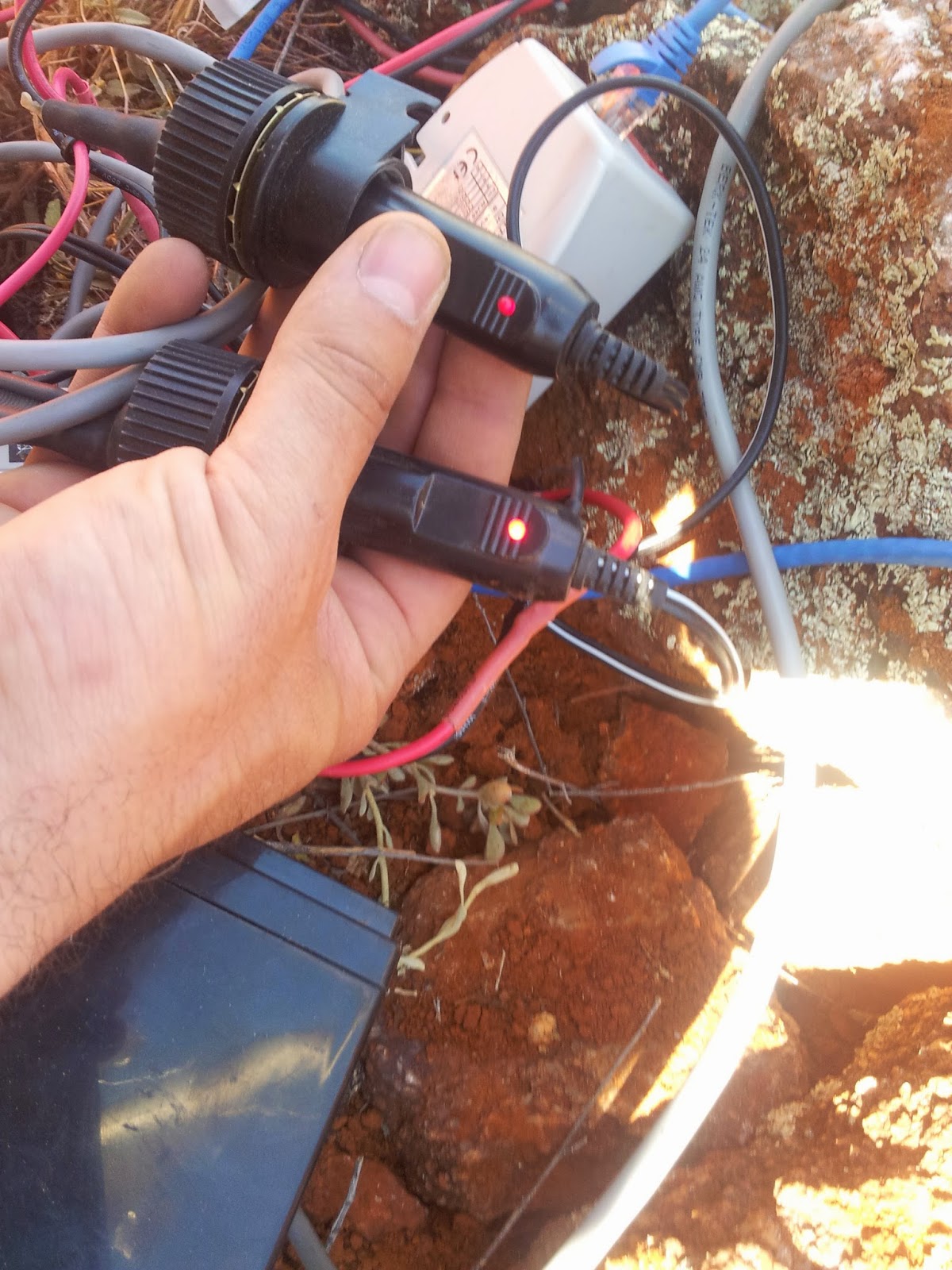 Now, we are in Australia, so it would not be appropriate to build an installation like this without using at least some fencing wire.  The wire is there to stop the panel sliding away from the mast, or getting blown about in strong wind. 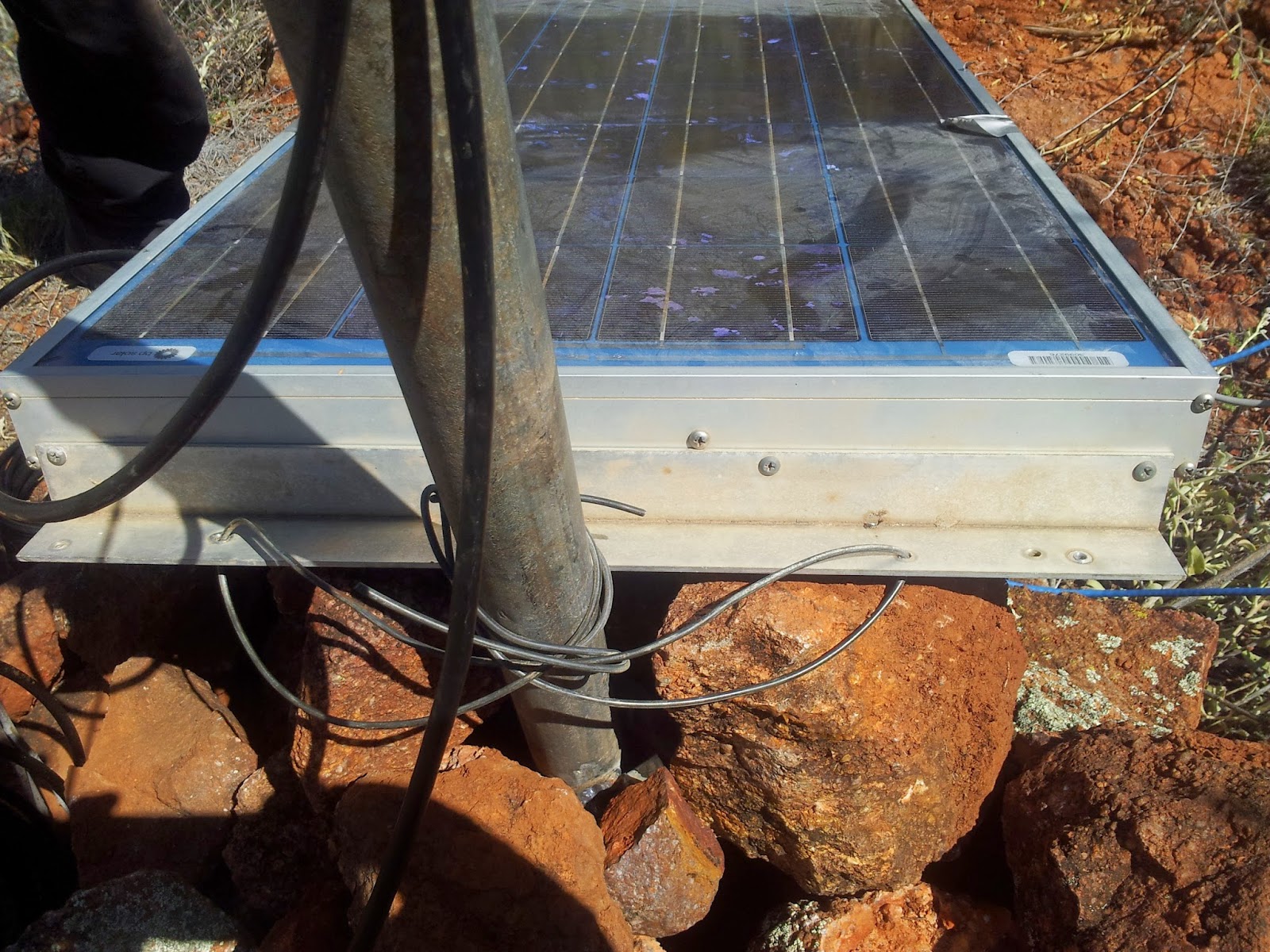 Here is the whole thing from the side.  What might not be obvious at first glance is the other piece of iconic Australian infrastructure that has been repurposed to build this relay: the recycled Outback Dunny (toilet) cistern that is being used to keep the weather off the electronics.

The cistern is placed under the panel to discourage any kangaroos or rock wallabies from trying to sleep under it, as well as reduce the UV exposure to the cistern and electronics.

We don't need to worry too much about the other Australian wildlife here, such as the poisonous snakes, deadly spiders, lethal octopii, despair inducing jellyfish (as distinct from the merely deadly jellyfish),  man-eating crocodiles and other biological hazards here.  The reality is that lightning kills more people and access points in Australia than all the biological things put together, with the possible exception of the Cockatoos and Possums (not to be confused with opossums). 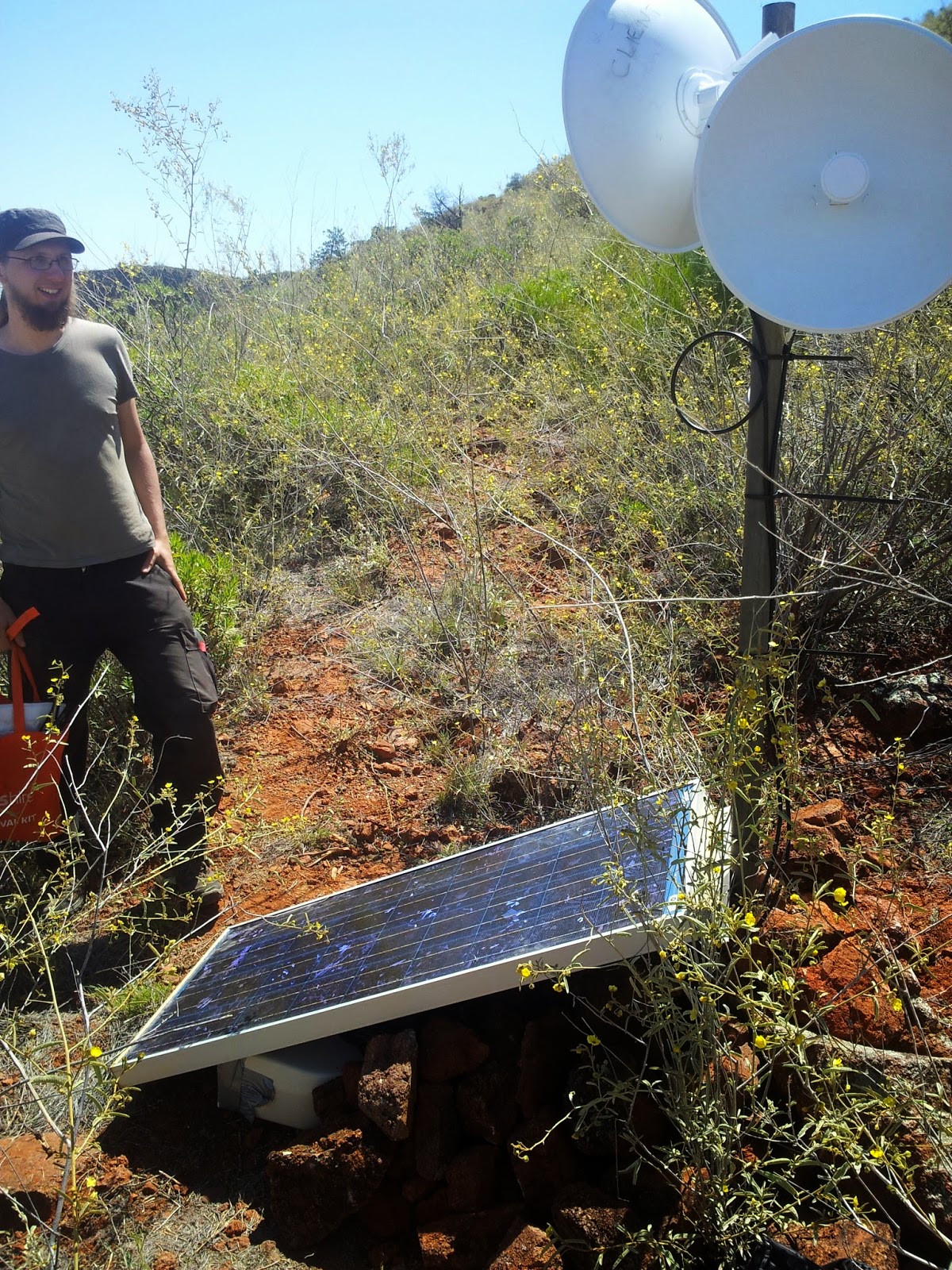 Then it was time to head down to the homestead to find a suitable landing point for the link.  After looking at the number of termites (white-ants) in the verandah wood work, we opted to use an old children's swing as it was sturdy, and has the added benefit of being easily relocatable. 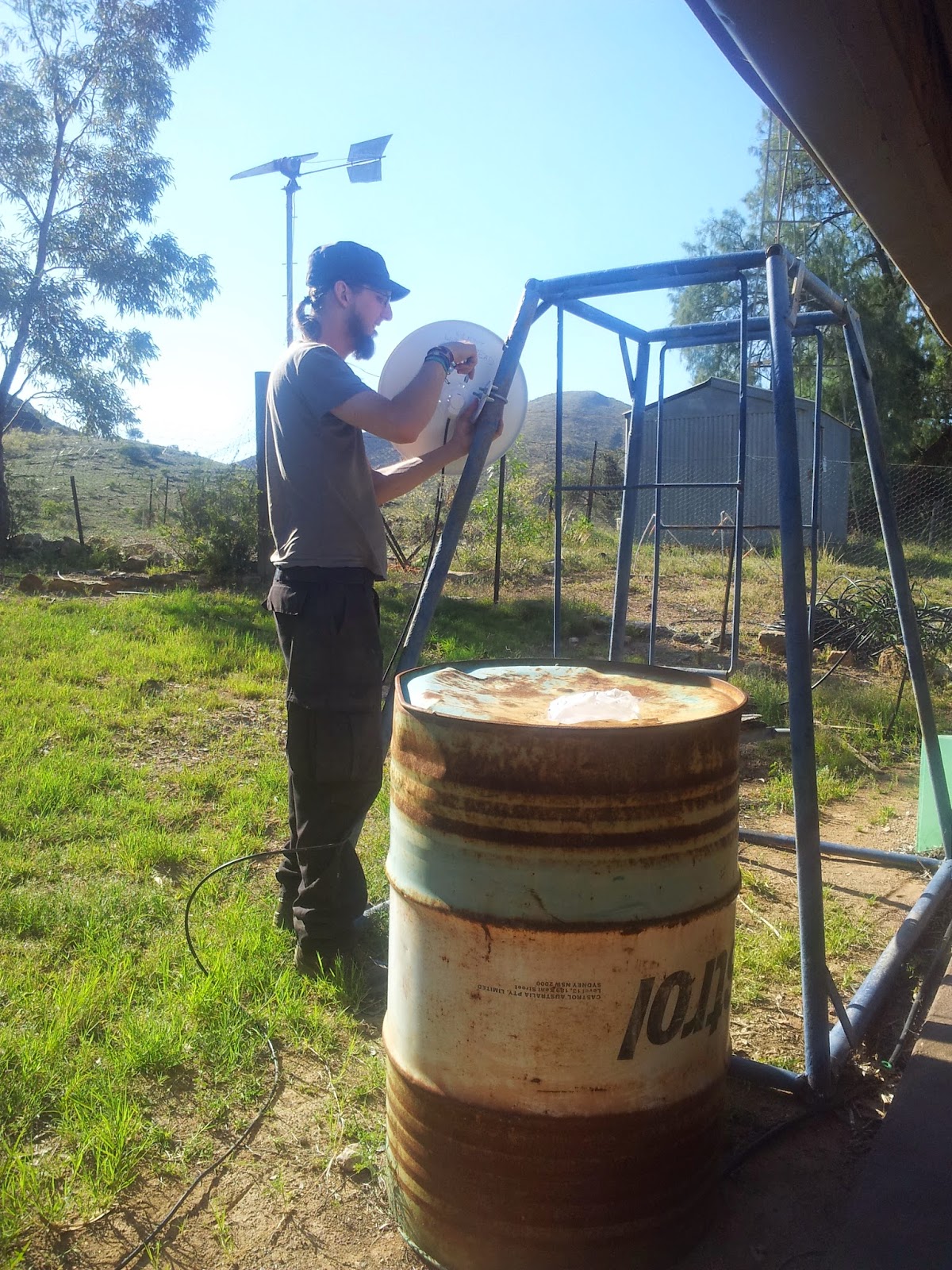 Here it is from the side.  The main hazard here is the dog which has already eaten the hose and might think that the ethernet cable is too tasty to resist. 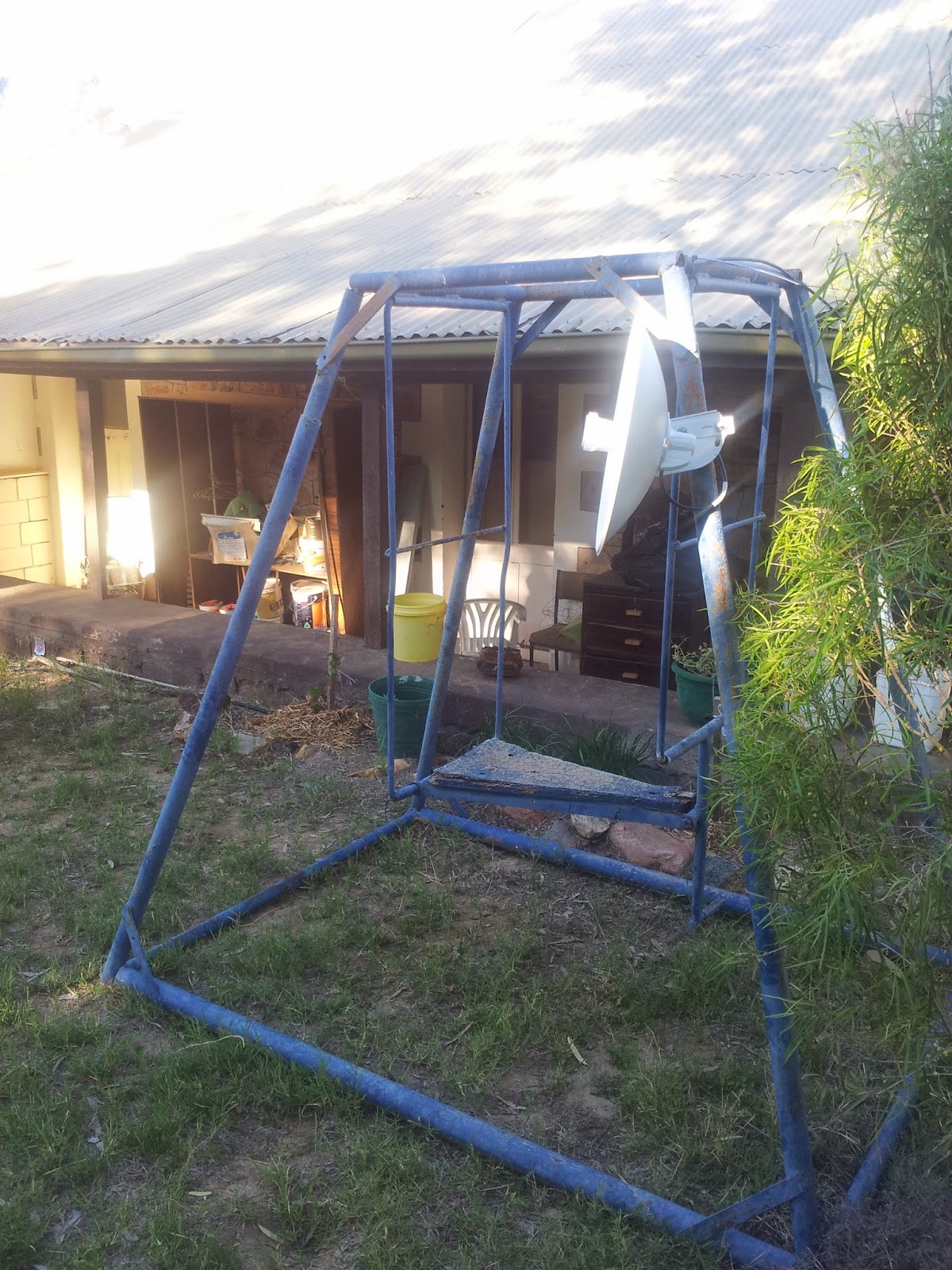 At this point, all of the hardware is in place, but we discovered that one of the connections up on Acacia Ridge is unhappy, so it will be back up the hill in the morning.  Basically the link between the two NanoBeams on the ridge was broken. However, each separate link was working, so we were able to confirm that we had full 300mbit/sec bandwidth in each direction, with a very comfortable link margin of about 40dB. 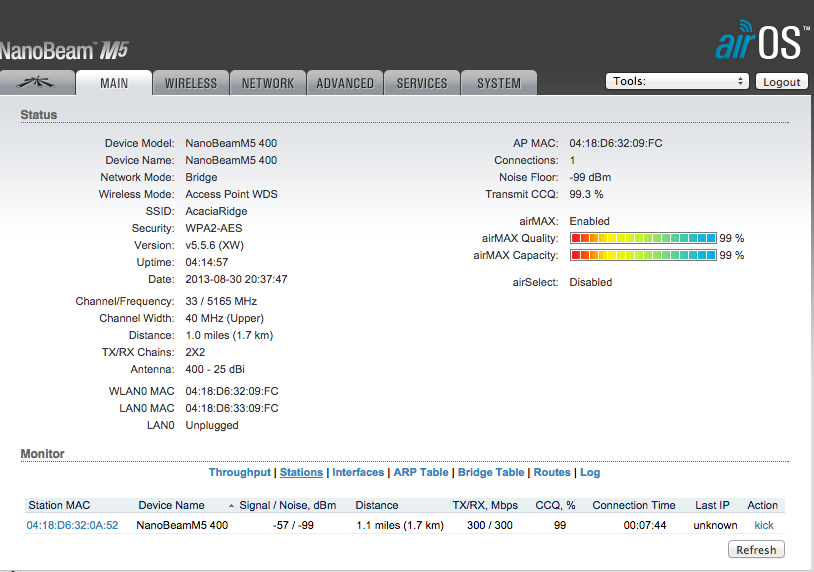 So once we fix that cable, the Arkaroola homestead will have faster internet access than we can get back home in suburban Adelaide.

Meanwhile, this being the Northern Flinders Ranges, we found a Quandong tree.  This is also known as "bush peach" and which makes very tasty pies, such as the one cooked and ate tonight, although we cheated and used fruit that had already been collected here.  Thanks go to whoever collected and dried the fruit :) 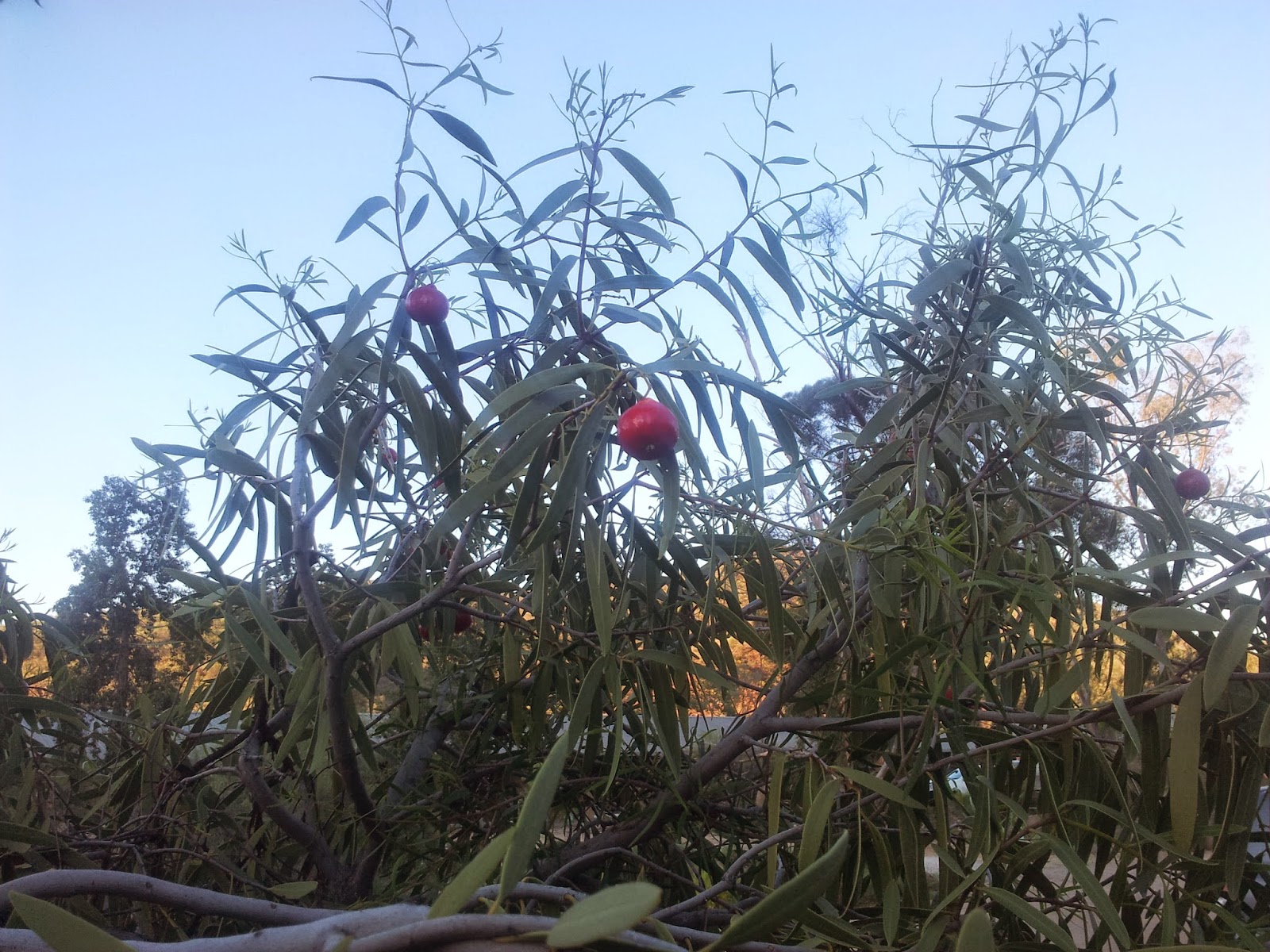 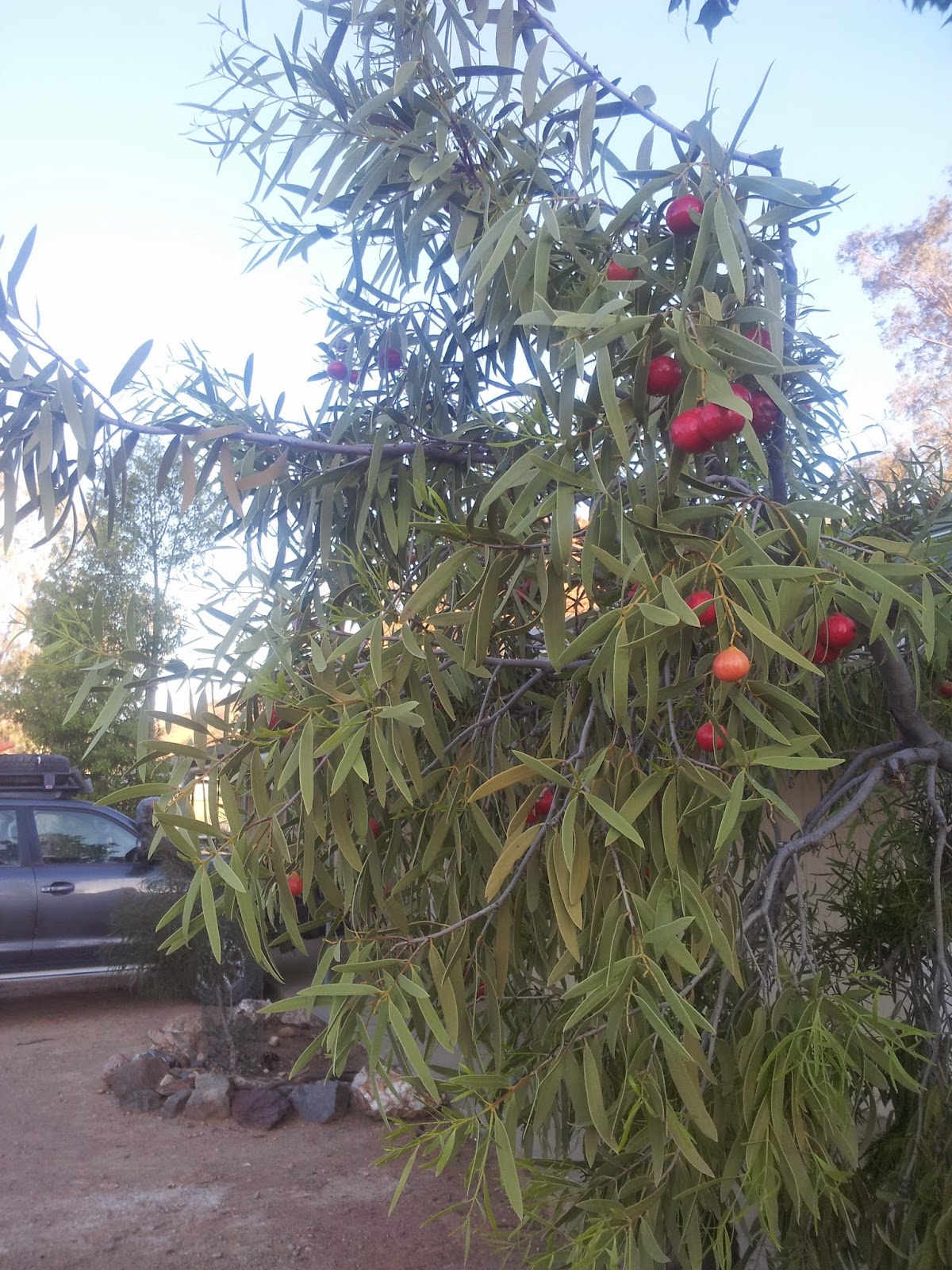 Posted by Paul Gardner-Stephen at 9:32 PM No comments: