Offers4U is an annoying ad-inserting thing for browsers that pops up large annoying "offer suggestions" and other junk when browsing the web (which also implies that it is taking a bit too close a look at your browsing activities..).

After a little exploration I found that it is part of the seemingly-unrelated "SafeFrom.Net helper" that claims only to be a tool to make it easier to download videos from youtube and other streaming sites.

To get rid of it, open chrome://extensions/ in chrome, and then disable the SaveFrom.net helper extension.  I guess if you still want to be able download from youtube and other places (e.g., if you lost the original of a video you uploaded some time ago), then you can turn the extension on, open a new tab, and then disable it again after completing the download.

I've been working on various aspects of the Mesh Extender firmware lately.

There are now a bunch of configuration options you can set by putting text files on the FAT partition of the USB memory stick.  This makes it fairly easy to set the configuration in the field, but putting the USB stick into almost any computer.  Gory details for them are on github, but I'll introduce a couple of fun ones now.

otabid.txt lets you specify a Rhizome Bundle ID (BID) that will be assumed to contain over-the-air updates.  Together with the over-the-air-updates/bootstrap program in the mesh-extender-builder repository linked above, this creates a nice easy way to update the main Serval binaries and configuration files on a Mesh Extender.  While this facility was designed to help with the development process, it will also come in handy for general software updates.  By setting the BID to a BID of your own choice, it is possible to have separate groups of Mesh Extenders that get updated separately, so that you can, for example, maintain separate development and production devices.

The second file is monitor.sid, and works with the above so that you can get a Mesh Extender to send a MeshMS message to someone whenever they apply an over-the-air update.  The message contains the GIT commit of the mesh-extender-builder repository that built the over-the-air update, thus providing you with a nice easy way to keep track of which Mesh Extenders have which version of what.

Sending the MeshMS was pretty easy, as we have a nice command line interface for doing so. The only real magic is getting the SID of the Mesh Extender, which we do with a nested shell command to get the SID out of Serval's keyring structure.  Here is the complete bit of code that sends the MeshMS, if monitor.sid exists.

What was really nice was that this worked first time.  Once I got the SID out of my phone, and put it on the Mesh Extender, and pushed out an OTA update, I had a MeshMS within a minute or so that looked like this: 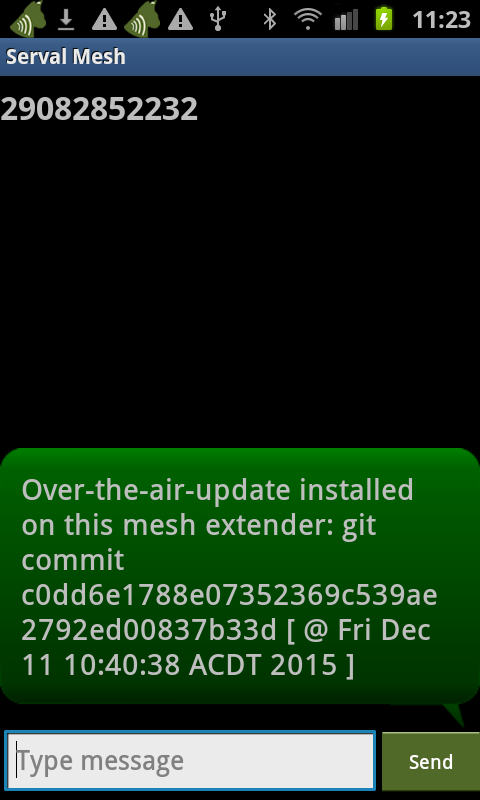 Note that the timestamp is the creation time of the OTA update, not the time it was applied.

Also, note that these OTA updates are pushed out over the Serval Mesh itself -- the Mesh Extender has no internet access.  In other words, we now have a nice facility that allows us to update Mesh Extenders in the field, without any supporting infrastructure, and with enough feedback so that we know which devices have been updated to what version.
Posted by Paul Gardner-Stephen at 5:05 PM No comments: