Do you thrive on contributing to something that has the potential to positively impact millions, if not billions of people the world over?

Do you slay pointers in your sleep, dream about data-flow diagrams, or cross-compile kernel drivers for fun?

Have you ever written your own compiler, interpretor or network stack for the fun of it (or all three)?

If you can answer yes to at least some of the above, the Serval Project Inc. has the following contract opportunities that it is seeking to engage, so that we are able to accelerate our software development programme:

(or possibly some mix-and-match for the total 1.4 full-time-equivalent.)

The purpose of these roles is to get us to our 1.0 public release in August 2012.  Future opportunities may develop over time, dependent on successful software outputs.

For both of these roles we are looking for people who can quickly pick up Java and/or C code, and make rapid and sustained contributions to the Serval Project's software base in preparation for major software releases during 2012.

Being a Java/C polymath will definitely work in your favour, as will having some experience with Android software development.  General Linux/UNIX admin and scripting awareness and skills are also a plus, as is demonstrated experience contributing to FLOSS software projects.

These openings are available immediately, are based in Adelaide, Australia (sorry, not negotiable for these openings due to the intensity of software development we have scheduled), and interested parties are strongly encouraged to put together:

1. A CV listing (providing links is great) any FLOSS, C, Java, Android and humanitarian experience;
2. A covering letter; and
3. About 250 words explaining why you think it is vital that the Serval Project succeed.

Then send it all to jobs@servalproject.org.  ODT and PDF are our preferred formats.

If we like what we read we will get in touch, and get into more of the nitty-gritty.

If we find more great people that we can offer work to, we will keep you on file for when we next have openings.
Posted by Paul Gardner-Stephen at 2:24 PM 2 comments:

Serval has made the Netexplo 2012 Top-100 Most Promising Projects

We seemed to have reached the point with the Serval Project were we no longer have to enter competitions to start getting short-listed for things.  This is almost as amusing as it is humbling.
So it is that today I discovered that we made the Nexexplo top-100 list of the latest and most proming projects. 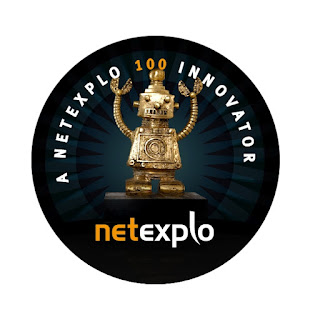 From their website, this is how they describe Netexplo:


The most promising uses of digital technologyEvery year the Netexplo global observatory of digital innovations identifies the latest and most promising projects and experiments on every continent through its international network of more than 200 spotters. This initial material, comprised of several hundred projects, companies and technologies, is then analyzed in greater depth. A college of international experts next selects the 100 most interesting cases, forming the annual Netexplo 100. Finally, a jury comprised of independent personalities from the academic world, research and international organisations elect the Grand Prix from those 10 award winners. The Grand Prix trophy is announced and given out at the Netexplo Forum.From new uses of the Web to groundbreaking technologies from research labs, as well as associations, NGOs or businesses that are transforming markets, every aspect of the ongoing digital revolution is covered. That’s why research that is still at the lab stage but has positive potential impact on lifestyles or an application that is already available can generate the same interest. Similarly, the Netexplo 100 lists futuristic applications on the verge of science-fiction alongside original, low-tech innovations using widely available technologies that deliver a socially useful function to a given audience.

So thank you to the Netexplo college for thinking that we are one of the most promising projects and experiments underway in 2012.  Now all we have to do is to live up to their expectations!

Posted by Paul Gardner-Stephen at 2:22 AM No comments:

If you are reading this blog, you probably know that the Serval Project is all about making mesh telephony practical, so that people can communicate anywhere, any time.

For regular Android software development, it is often practical to use the Android emulator to reduce the time between updating source code and seeing the effect of the change.

For Serval, this isn't really an option, because we work below the Android API layer, and much of the software development challenge is related to making the WiFi chipsets do what we want.  We also have a fair amount of native code to do the mesh routing and telephony functions.  In fact, we currently have an entire distribution of Asterisk in the Serval Mesh software, which must be decompressed and installed when the Serval Mesh APK is installed or updated.

Together, these contribute to an update process that can take several minutes to between modifying a line of code and seeing it on an Android device, especially on the low-cost devices that are our primary targets, and when using the debug option in eclipse.

Those minutes add up over time, and so I decided to minimise the install time as much as possible, and also address another problem with developing our software, that is detecting when you have an actual multi-hop network.

To reduce the install time, I started looking at the Asterisk installation to see what we could safely throw out.  I managed to get rid of about half of the loadable modules, several utilities and all of the speech files that Asterisk comes bundled with.  This reduced the size of the APK by a little over 1MB, down to just under 5MB, and cut down the install time by about 15%.  Further savings came from removing unused audio codecs in our SIPDroid-derived SIP client, saving another 0.4MB, and getting the whole thing down to less than 4.5MB and installing about 25% faster than previously.

The bulk of the remaining time is about evenly split between installing Asterisk and testing that the WiFi control works properly.  For development, it probably makes sense to separate out the Asterisk installation from the other files we need to deploy on installation, as we really don't modify the Asterisk files between builds.  This shouldn't be too hard to do, but I have run out of time tonight.

Also, for our target handsets, we really don't need to test the WiFi control every time we update, so we should be able to set a flag to tell the software that we are in development mode, and just assume that the WiFi control works.  This now works by checking if a file called /sdcard/serval/developer-mode/fast-wifi exists, and if so, bypassing those tests, and thus saving about 15 seconds.

So over all the minimum time from hitting "run" in Eclipse to getting the software ready has been reduced from 85 seconds down to 48 seconds (without debugging).

The over significant development convenience task I have worked on in the last few days is one that is probably of more general interest.  The peer list now shows the number of hops to each of the nodes that your phone knows about, as shown in the image below.  This was produced by having two phones at opposite ends of my house, and having the phone shown here with me out on the street. 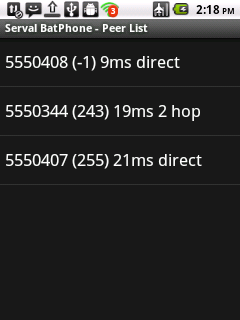 Importantly for debugging, this displays doesn't ask BATMAN how far to the node in question, but actually enquires of the time-to-live (TTL) field in the IP header, and thus returns the true distance from your phone to the phone in question (the return path might be a different length, though).

Actually, because of limitations with the Java UDP programming interface, the TTL field is read by the Serval DNA daemon (which is written in C), and included in the returned UDP packet to the requesting client.

This means that we can just look at the interface on the screen (and so can all of you who have been asking us for this feature) and see what is happening to routes, instead of having to connect to the phone with a USB cable and enter all sorts of commands to ask BATMAN and the operating system what might be happening.

So all in all we now have a slightly faster and easier development process, that I am sure will more than save the couple of person days of effort that they took to develop, and thus enable us to work faster instead of harder.
Posted by Paul Gardner-Stephen at 2:48 AM No comments: