Regular readers of this blog will know that we have been looking at a variety of hardware options for the Serval Mesh Extender.

The Serval Mesh Extender is a device that combines ad-hoc WiFi meshing with long-range license-free UHF packet radio to allow the easy formation of mesh networks spanning useful distances. Typically the UHF packet radio has a range about ten times greater than WiFi. This means that in ordinary suburban and urban areas we get a range of a block or two, and in open rural areas the range can be in the kilometres.

We run our award winning Serval Mesh software over the top, providing an easy to use communications system that lets you use your cell phone without cellular coverage, for example, during a disaster, or when you and your friends are near one another outside of the range of your native network. For example, if you are at an international gathering and don't want to pay $4 a minute for the privilege of calling someone a few hundred metres away.

The challenge with the Mesh Extender design is that we haven't had the budget to design our own device from the ground up. As a result we have been using existing hardware platforms, and trying to adapt them to accept the excellent RFD900 UHF packet radios we source from RFDesign (their link margin is probably about 10dB better than competing radios that we are aware of).

This means that we have been doing things like modifying TP-LINK MR3020 wireless routers to build prototypes. While it works, the process is far from satisfactory, and the physical steps take a couple of hours per unit, which makes the effective unit price very high, despite the low cost of the MR3020 unit itself.

This is where the Arduino Yun is very exciting for us. It has all of the functionality of the MR3020 in the form of the mesh-friendly Atheros processor and WiFi system-on-a-chip running Linux, and of course being an Arduino it has plenty of connectivity options for us to connect to the RFD900, which just uses RS232 serial. As an added bonus the Yun has a microsd slot, so we don't need to use a USB memory stick for mass storage, which actually makes a noticable impact on power consumption. The larger flash on the Yun is also welcome, as the 4MB flash on the MR3020 is, frankly, a pain to work with.

While we are still working on the integration, the prospect is there for the Yun to save us a lot of time, and hence cost, in making future prototypes, and the Yun board itself could be the basis for a customised PCB that exactly meets our needs, and allows us to just plug the radio module directly onto the PCB.  Here you can see the Yun connected to an RFD900 radio ready for integration testing: 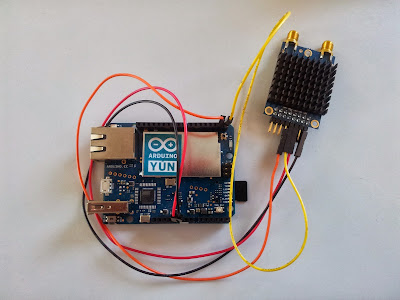 In short, the Yun is opening a new opportunity for us to innovate faster, more affordably, and with a better result.
Posted by Paul Gardner-Stephen at 11:09 PM